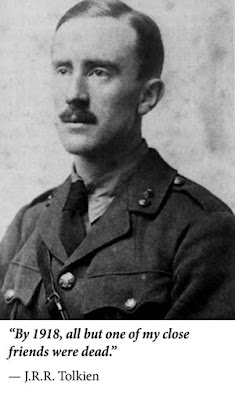 In the summer of 1916, a young lieutenant on the Western Front learned that one of his closest friends had died on the first day of the Somme.  He wrote, “Something has gone crack…. I don’t feel a member of a little complete body now…I feel a mere individual.”[i]

The officer was J.R.R. Tolkien, and his grief and sense of dislocation was prompted by the death of Robert Gilson.  Tolkien and Gilson, together with Christopher Wiseman and Geoffrey Bache Smith, had formed Tolkien’s “first fellowship.” [ii] The four were schoolmates at King Edward’s School in Birmingham, and beginning in 1911, the boys met regularly in the school’s library and at Barrow’s, the tea shop of a local department store. Calling themselves the TCSB (Tea Club and Barrovian Society), the friends discussed their ambitions for shaping a better world through literature and art.

The Great War interrupted their plans, and all four enlisted in military service: Wiseman in the Navy, and Tolkien, Gilson, and Smith with the British Army.  Only Wiseman and Tolkien would survive the war.

Geoffrey Bache Smith was also devastated to learn of his friend’s death. His poem “Let us tell quiet stories of kind eyes” mourns the loss of Gilson while asserting that friendship itself can never die.

Let us tell quiet stories of kind eyes
And placid brows where peace and learning sate;
Of misty gardens under evening skies
Where four would walk of old, with steps sedate.

Let's have no word of all the sweat and blood.
Of all the noise and strife and dust and smoke
(We who have seen Death surging like a flood,
Wave upon wave, that leaped and raced and broke).

Or let's sit silently, we three together,
Around a wide hearth-fire that's glowing red,
Giving no thought to all the stormy weather
That flies above the roof-tree overhead.

And he, the fourth, that lies all silently
In some far-distant and untended grave,
Under the shadow of a shattered tree,
Shall leave the company of the hapless brave,

And draw nigh unto us for memory's sake,
Because a look, a word, a deed, a friend,
Are bound with cords that never a man may break,
Unto his heart for ever, until the end.

Steeped in melancholy and nostalgia, the poem offers a lament not only for a lost friend, but for a lost world.  Recalling misty gardens under evening skies, the poem recreates a tranquil world of dim twilight. Innocent school days before the war are so far removed from the mud and gore of the trenches that they appear veiled by mist, impossibly distant.

In memory, four men on the brink of adulthood sedately walk abreast.  Their gathering is not regimented, nor do they march ahead.  Instead, in the remembered days “of old,” they saunter together, loose and easy in the freedom of friendship and leisure.

The poem attempts, no matter how briefly, to deny the present reality.  It begs for the mercy of oblivion as it attempts to block out the surrounding sweat, blood, noise, and grime. The poet knows that Death is a ravaging flood that cannot be turned back -- it outraces and overwhelms all men in its path. And yet the poet asks for a temporary truce. For a moment in the midst of the war, Geoffrey Bache Smith pauses to imagine another world, a world far removed from the Western Front.

In this world apart, the three surviving members of that first fellowship gather around the welcoming fire of a home or a library or a pub.  Finding comfort in one another’s company, they are immune to the turmoil that rages outside. And yet outside, “under the shadow of a shattered tree” one of their dearest friends, the fourth of their circle, lies “all silently/In some far-distant and untended grave.”

Avowing a bond stronger than death, Smith imagines his lost comrade leaving his grave and for a moment, deserting the company of the other unlucky, courageous dead of the war.  In this imagined world, the resurrected man draws near “for memory’s sake,” proof that the bonds of love and friendship can never be broken. 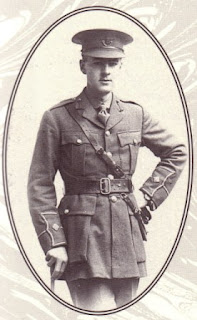 “Let us tell quiet stories of kind eyes” is a poem of friendship, but its undertones echo the somber poetry of the Old Testament book of Ecclesiastes:
Remember now thy Creator in the days of thy youth, while the evil days come not, nor the years draw nigh…. because man goeth to his long home, and the mourners go about the streets: Or ever the silver cord be loosed, or the golden bowl be broken, or the pitcher be broken at the fountain, or the wheel broken at the cistern.  Then shall the dust return to the earth as it was: and the spirit shall return unto God who gave it (Eccl 12:1, 5-7)

Six months after Gilson’s death, in early December of 1916, Geoffrey Bache Smith was struck by shrapnel from an exploding artillery shell.  Although his wounds were not initially thought serious (while waiting to be transported to the casualty clearing station, Smith smoked a cigarette and wrote a reassuring letter to his mother)[iii], gas gangrene set in, and two days later he died.

Almost a year before, anticipating a dangerous night patrol mission in early February of 1916, Smith had written to Tolkien about death and friendship: 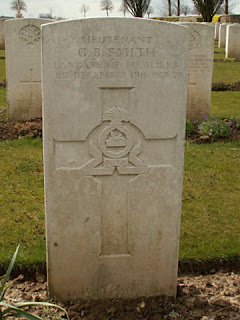 “my chief consolation is, that if I am scuppered tonight there will still be left a great member of the TCBS to voice what I dreamed and what we all agreed upon. For the death of one of its members cannot, I am determined, dissolve the TCBS. Death is so close to us now that I feel - and I am sure that you feel, and all the three other heroes feel, how impuissant it is. Death can make us loathsome and helpless as individuals, but it cannot put an end to the immortal four! ... Yes, publish... May God bless you, John Ronald, and may you say the things I have tried to say long after I am not here to say them, if such is my lot."

In 1918, JRR Tolkien wrote the preface to Smith’s posthumously published book of poetry, A Spring Harvest, and when he published The Hobbit in 1937, Tolkien sent copies to “some friends and relations, including…the mother of his dear friend Geoffrey Bache Smith, who had died in battle over twenty years before.”[iv]