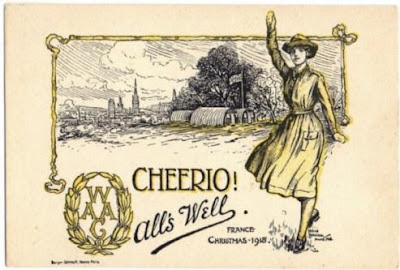 The Peace Christmas: that’s what many called the holiday season of the winter of 1918.  Just weeks earlier, the Armistice ended the world war that had lasted for over four years, involved thirty-two nations, and killed an estimated 16 million.  Yet though the war was over, most of the fighting men and women volunteers had not yet returned home, but instead continued to serve overseas.

Carola Oman, daughter of an Oxford military historian, enlisted as a V.A.D. nurse on July 1, 1916.  In December of 1918, she was working at the British rest station in Boulogne, France.

Opposite us across the cobbled square
The trees stand black against the Christmas rain.
The clerk looks up a moment from his pen
In the kit-office, with a vacant stare,
And sees the flags drip grey upon the pain—
Chattering women, shawled and clutching toys,
A few civilians, porters, slouching men,
And shambling smoking youths, and shrieking boys,
Wandering on platforms.  It is noon;
But blue as dusk, and dark as melted snow
Can fill the flooded gutters.  Very soon
The garish lamps will flicker out.  And so
Comes the Peace Christmas to us. Is this all,
To stare and scribble while the shadows fall?

The light burns low. I see the canvas shake
Upon the walls. Now it has passed.  In dark
I rise alone, and my tired footsteps make
Slow progress over a black landscape.  Blank
The sightless sky—a mighty wind—the bark
Of a far-distant dog—the smell of rank
Forgotten country roads.  By my side now
There moves another traveler.  As we walk
Down to the hurried village a high star
Burns with heroic light, and so we talk
Of recent wonders, for if men speak true
Three days the dawning sky has been inflamed.
There have been angels seen above the hills.
Of her eternal loneliness ashamed
The old year withers silently, but still
Listens, though not with hope. Now very wide
The ceaseless wind slashes the clouds apart.
And unprotected lies the countryside
Deserted, feeling for her frozen heart.
But in the village, as we pass near by,
The inn is overcrowded.  We pass on.
The star is stayed above the inn—or gone.
We only hear a new-born infant cry.
—Carola Oman

This Christmas scene is grey and bleak. Rain-sodden flags drip upon the pain of widows, fatherless children, refugees, and the myriads of others who must now bear the aftereffects of the war. The pervasive mood is one of desolation: now that peace has returned, is this shadowed world the best that can be hoped for?

As dusk falls, the poem’s narrator leaves the shelter of her canvas tent and wanders alone into the night. She makes her exhausted way through the blackness, hearing the distant sounds of village life, until she finds herself in the company of a stranger. They walk together under a star that blazes with “heroic light,” discussing recent rumors of signs and wonders: angels have been seen in the hills.

The crowded French town, besieged by the burdens of war, blurs and recedes until its skies and inns recall another village in a far-off land, where refugees sought shelter, peasants set out in search of the miraculous, and distant foreigners journeyed to find a new king.

The correspondences between the past and present may hint at a brighter future, but no angel of Bethlehem— nor of Mons—appears with clear reassurance.  Perhaps the strange traveler is an angel; perhaps not.  The inn may shelter a miraculous birth, but the walkers do not stop.  The infant’s cry may be that of a transcendent God who loves beyond reason, or only the wail of another undernourished, impoverished child in a war-torn country.

Four years of brutal war have left the heart of the countryside unprotected and frozen; the mystery is whether the hearts of the men and women who survived can be thawed and healed, can learn again to feel and to believe.
Posted by Connie R. at 11:49 PM No comments:


One-hundred years after the Great War began, the lost continue to be found. In the midst of centenary commemorations, unidentified soldiers’ remains have been identified and reinterred, and soldiers’ medals, pocket-watches, and other personal effects have been located and returned to their families. 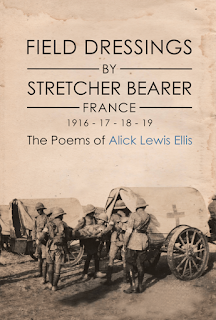 One of the most remarkable stories is that of Private Alick Ellis -- his war-time notebook was found in the attic of a home in Hertfordshire in 2017.  Ellis tended the wounded on the Western Front, and he titled his poetry journal Field Dressings by Stretcher Bearer.  After having been forgotten for nearly one-hundred years, Ellis’s notebook was anonymously donated to those curating the Herts at War exhibition, and historian Dan Hill was able to research and identify Alick Ellis’s descendants, returning the journal to them. Just days before the centenary of the Armistice, the family published Ellis’s poems with a brief biographical introduction. Here is his poem “Revenge,” a humorous comment on one of the most hated realities of daily life at the front.

When this bloomin’ war is over & I reach my native land,
I shall play the role of villain with a great revenge in hand,
I may get hung for murder but just take my word I’ll risk it,
For I’m going to find the blinkin’ man who made the Army biscuit.
—Alick Ellis

It has long been known that “An army marches on its stomach.”*  One of the most common foods issued to the British troops was the Huntley & Palmers Army No 4, a thick, four-inch-square slab of baked wheat flour, salt, and water.  As the Imperial War Museum notes, the biscuit was so dense and hard that it
challenged the dental health of British Army personnel…. A typical way of rendering the product more edible was to grind or crumble the biscuit and add water to make a paste or 'duff' which could be added to mixed vegetables or stew. The sustaining qualities of the First World War period British Army biscuit were notably endorsed by the soldier-poet Ivor Gurney, while training with the 2/5th Gloucesters in early 1915; in a letter to his friend Will Harvey he noted: ‘The Army biscuits suit me. Of course they are too hard for my poor teeth, but hot tea and patience helps one past all.’ ('Ivor Gurney: War Letters', edited by R K R Thornton, Carcanet New Press, 1983, p.26).**


A member of the Fifth Canadian Battalion, whose mascot was a goat, memorialized the biscuit in another poem, “Our Mascot’s Lament”:

I’ve chewed a deck of cards, I’ve dined off nails,
If this was a sardine tin I might risk it;
But this is where my goatish courage fails,
I simply can’t digest this H.T. Biscuit.***

And a satirical advertisement in the Fifth Canadian Battalion’s Christmas 1916 issue promised,

All They Want Is Soaking
Soak Them & the Pleasure’s Thine.
With every dozen biscuits we give away a coupon—
With every 100 coupons
We Give A Set Of Teeth.


As Dr. Rachel Duffett, author of Stomach for Fighting explains,
The British working classes had grown up on a diet dominated by bread, so while a hard-baked carbohydrate substitute may have scored highly in logistical terms it was regarded by most men as an abomination…. Scores of cartoonists and writers have made jokes about biscuit’s similarity to kindling, but it was no laughing matter. Many of the working and lower-middle-class soldiers had very poor teeth – the result of too much sugar and too little dentistry.****
Soldiers who did not wish to eat the Army-issued biscuits found new and creative uses for the rations. In 2015, a British museum exhibition “The First World War in Biscuits” displayed a “unique collection of 100 year-old ration biscuits, personally modified by soldiers”† who had repurposed the hard tack as stationery, picture frames, and small art canvases.

And in 2014, two WWI biscuits from the Gallipoli campaign, labeled “Biscuits used by troops in Suvla Bay,” were sold at auction in 2014.  Duffett comments, “The reason they [the biscuits] last so long is they’re pretty much inedible…. They’re rock hard…. They are just dreadful.  They’re like the worst children’s rusk [teething biscuit] ever.”††