The United States entered the Great War in April of 1917, but spent much of that year recruiting and training troops. Most American doughboys didn’t begin to head “Over There” until the spring of 1918, yet by the end of May, over one million American soldiers were in France. On May 28th, American 1st Division troops attacked the Germans at Cantigny, taking the town and then resisting seven German counter-attacks, at the cost of 200 American dead and over 1600 casualties. Less than one week later, American 2nd and 3rd Division troops, including a brigade of U.S. Marines, repulsed the German spring offensive in ferocious fighting at Château-Thierry and Belleau Wood. American casualties neared 10,000, and of those, 1,811 died. Marine Sergeant Major Dan Daly reportedly said to his men prior to charging German positions at Belleau Wood, “Come on, you sons of bitches, do you want to live forever?”*

The formidable gap between the glorious ideal of war and the reality of battle yawned wide, but in 1915, two years before America entered the war, New York City writer Richard Butler Glaenzer had warned against naïve militarism.

What fun to be a soldier!
-- Everykid

Sure, it's fun to be a soldier! Oh, it's fun, fun, fun,
Upon an iron shoulder-blade to tote a feather gun;
To hike with other brave galoots in easy-going army-boots;
To pack along a one-ounce sack, the commissary on your track;
To tramp, tramp, tramp, to a right-and-ready camp!
Fun? -- Sure, it's fun, just the finest ever, son!

Yes, it's fun to be a soldier! Oh, it's fun, fun, fun,
To loaf along a level road beneath a cloudless sun
Or over fields of golden grain, kept cool by puffs of wind and rain;
Then richly, more-than-fully, fed, to stretch upon a downy bed
And sleep, sleep, sleep, while the stay-at-homes weep!
Fun? -- Sure, it's fun, just the finest ever, son!

Oh, it's fun to be a soldier! Oh, it's fun, fun, fun,
To catch the silly enemy and get 'em on the run;
To here and there blow off a head with just a bit of chuckling lead;
To bayonet a foolish bloke at hide-and-seek in trench and smoke;
To shoot, shoot, shoot, till they've got no legs to scoot!
Fun? -- Sure, it's fun, just the finest ever, son!

God, it's fun to be a soldier! Oh, it's fun, fun, fun
To lie out still and easy when your day's sport's done;
With not a thing to worry for, nor anything to hurry for;
Not hungry, thirsty, tired, but a hero much-admired;
Just dead, dead, dead, like Jack and Bill and Fred!
Fun? -- Sure, it's fun, just the finest ever, son!
—Richard Butler Glaenzer

A sergeant from the 1st Division, Boleslaw Suchocki, recounted his experience of soldiering:

Into the village of Cantigny we go.  There remained nothing but ruins.  We passed on through to the other side of the village.  Here we encountered barbed-wire entanglements, but it was our good fortune to get through these without any mishap.  But once across I noticed that the boys were falling down fast. A shell burst about ten yards in front of me and the dirt from the explosion knocked me flat on my back.  I got up again but could not see further than one hundred feet.  I heard someone yell “Lay down.” I knelt on one knee and wondered what would come next… We laid down and started to shoot, and it was our good fortune that the second wave reached the place at this time.  About twenty Dutchmen came out of the holes, threw down their rifles, and stood with their hands up.  The doughboys didn’t pay any attention to this, but started in to butcher and shoot them.  One of the doughboys on the run stabbed a Dutchman and his bayonet went clear though him.  The German artillery was in action all the time…. I stopped at a strong-point and asked the boy in the trench if there was room for me to get in. ‘Don’t ask for room, but get in before you get your [!#%&] shot off,’ a doughboy said.**

And Hervey Allen, a 2nd lieutenant with the 28th Division who fought in the July attack at Château-Thierry, concluded,
Men who have faced death often and habitually can never again have the same attitude towards life.  It is hard to be enthusiastic about little things again. The fact that everybody is soon going to die is a little more patent than before.  One sees behind the scenes, the flowers and the grave-blinds, the opiate of word read from the Good Book, and the prayers. For there is Death, quiet, calm, invincible, and there is no escape.† 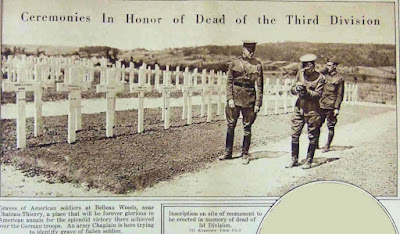 
Born in France to an American father and French mother, Raoul Lufbery is one of the most famous American pilots of the First World War, an ace with at least 17 combat victories.  Early in his military career, he served in the Philippines as a rifleman in the U.S. Army from 1907 – 1909, but when war broke out in Europe, he joined the French Foreign Legion and trained as a pilot. Lufbery flew with the Lafayette Escadrille, and after American joined the war, he was commissioned in the U.S. Army Air Service, where he instructed new pilots, among them Eddie Rickenbacker.

According to American pilot Bert Hall, Lufbery “rode the skies like a fighting demon” and “was always looking for a good scrap.”* Hall also described Lufbery as “a mushroom hound,” for “Every time it rains, he goes out and gathers some mushrooms.  The French say he is going on a reconnaissance des champignons.”**

To Edwin C. Parsons, another pilot with the Escadrille who frequently flew as his wingman, Lufbery was “one of the most tragically outstanding figures of the war in the air.” In his memoir, Parsons wrote,
To me, Luf was one of the great mysteries of the war.  No man alive can truthfully say that he knew him.  I ate, slept, drank and fought beside him for months on end.  I discussed combat tactics and played bridge and went on binges with him…. I was in daily contact with a figure of flesh and blood, but know him? Not a chance.  In contrast to him, the Sphinx was a child’s primer.  He kept his real self shut up like a clam in a shell.  He was a man seemingly devoid of fear or, in fact, emotion of any kind.  But what a man he was in the air!  He had forgotten more about combat flying than most men ever knew.”***
Lufbery was killed on May 19, 1918 in circumstances that are still debated: he either jumped from his burning plane or, while trying to clear a jam in his machine gun, was thrown from the cockpit when the plane flipped.

To a Young Aviator

When you go up to die
Some not far distant day,
I wonder will you try
To tear your mask away,
And look life in the eyes
For once without disguise?

Behind your mask may hide
What treacherous, covered fires!
What hidden torturing pride!
What sorrow, what desires!
Whatever there may be
There will be none to see.

Yet I think when you meet
Death coming through the skies,
Calmly his face you’ll greet,
Coldly, without surprise;
Then die without a moan,
Still masked although alone.
—Aline Kilmer

Although it’s highly unlikely that the poem was written specifically for Lufbery, “To a Young Aviator” is an apt memorial for him and all the pilots of the First World War.  The poem captures the cool courage of the fliers, as well as the solitary loneliness of the job.

Aline Kilmer is almost unknown today as a writer. Her husband was the American poet Joyce Kilmer (best known for his poems “Trees” and “The Rouge Bouquet”).  Joyce enlisted in the A.E.F. in April of 1917, but just weeks before he left for France, the couple’s daughter Rose died in early September of 1917.  Left with four small children and mourning the loss of her eldest daughter, Aline Kilmer would also have been well-acquainted with death and loneliness.  In early 1918, she wrote another poem:

I do not know which is worse when you are away:
Long grey days with the lisping sound of the rain
And then when the lilac dusk is beginning to fall
The thought that perhaps you may never come back again;
Or days when the world is a shimmer of blue and gold,
Sparkling newly all in the dear spring weather,
When with a heart that is torn apart by pain
I walk alone in ways that we went together.