After earning a Military Cross for bravery, making public his letter “Finished with the War: A Soldier’s Declaration,” undergoing treatment for shell shock at Craiglockhart Hospital, and deciding to return to his men and the battlefront, Siegfried Sassoon found himself at Litherland military camp in December of 1917. His diary records his mood:
Came to Litherland on December 11. Since then have eaten, slept, played a few rounds of golf at Formby, walked on the shore by the Mersey mouth, and am feeling healthy beyond measure. I intend to lead a life of light-hearted stupidity. I have done all I can to protest against the war and the way it is prolonged. At least I will try and be peaceful-minded for a few months–after the strain and unhappiness of the last seven months. It is the only way by which I can hope to face horrors of the front without breaking down completely. I must try to think as little as possible. And write happy poems. (Can I?)*

Sassoon’s poem “Thrushes” had been written shortly before his release from Craiglockhart as Sassoon prepared himself to return to battle; it was published in the Hydra in November of 1917.

Tossed on the glittering air they soar and skim, 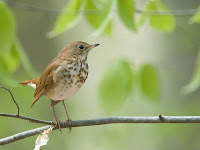 Whose voices make the emptiness of light
A windy palace. Quavering from the brim
Of dawn, and bold with song at edge of night,
They clutch their leafy pinnacles and sing
Scornful of man, and from his toils aloof
Whose heart's a haunted woodland whispering;
Whose thoughts return on tempest-baffled wing;
Who hears the cry of God in everything,
And storms the gate of nothingness for proof.
—Siegfried Sassoon

In April of 1916, Sassoon recorded in his diary, “Since March 26th I have done 18 days in the trenches,—and those days & nights are a mechanical & strained effort,—Coming away from it all—to find the world outside really acknowledging the arrival of spring—oh it was a blessed thing…. Sunset was fading with a long purple-gray cloud above the west, & oh the wood was still, with slender stems of trees, all in their vesture of young green—& bluebells were on the ground, & young fresh grass, & blackbirds & thrushes scolding & singing in the quiet, & the smell of wet mould, wet earth, wet leaves—& voices of children coming up from a cottage below the hill. It was a virgin sanctuary of peace for my soul & heaven for my eyes & music for my ears; it was Paradise, & God, & the promise of life.”**

In his study of nature and the British soldier in the Great War, John Lewis-Stempl writes, “Birds had a special place in the hearts and minds of men on the Western Front…. Although birds lived in their own world, they were also the ‘link’ to God. More than any other fauna, birds possessed the ability to carry the watcher ‘heavenwards.’”†