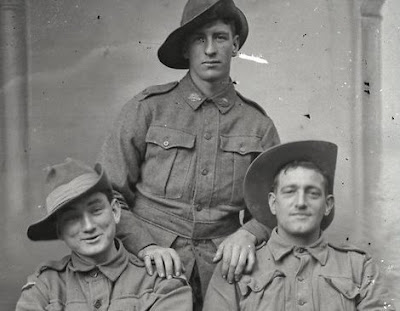 While the poetry of Wilfred Owen and Siegfried Sassoon speaks eloquently of the pity of war, soldiers also used humor to cope with the trauma and tragedies of the conflict.  The ANZAC Book is a collection of poems, stories, jokes, and sketches created by men who fought at Gallipoli in 1915.  One of the poems included is a comic ballad in the style of Robert Service and his pre-war poems, such as "The Shooting of Dan McGrew."

To the following poem, I’ll add only two notes: the asterisks and vocabulary notes are included in the original text – and this is a poem best read aloud.

How I Won the V.C.
(The sort of thing we must expect to hear after the war is ended)

Yes, that’s the red ribbon I’m wearing—
Just a small strip of scarlet, you see,
But there’s no one can tell how I prize it
Nor the glow it occasions to me.
For it speaks of the broad fields of honour
Which we wrung from the red jaws of hell—
And my eyes grow bedimmed for the cobbers*
Who battled and conquered and fell.

Yes, that’s the V.C.  How I won it,
It isn’t for me to relate.
(We heroes are always so modest,
And boasting’s a thing that I hate.)
Well—seeing you write for the papers,
I’ll make an exception of you; 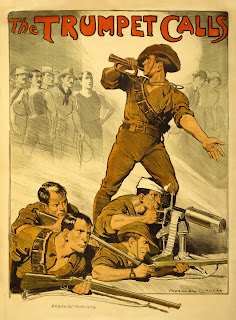 Don’t mention my name if you write it,
Tho’ every partic’lar is true.

It was during a fight for an outpost—
It was called the Green Knoll, I believe—
And the Turks on the top dealt out slaughter:
They’d a week of defeat to retrieve.
It was five thousand feet to the summit,
And almost as steep as a wall;
And they met every charge as we rushed it
With bayonet, shrapnel, and ball.

‘Twas defended by nine tiers of trenches
(That’s strong for an outpost, you’ll guess),
With twelve 42 centimetres,
Which kicked up the deuce of a mess.
We’d been fighting five days without resting,
When the eighth line of trenches we took;
For ev’ry man there was a hero—
From me to the company’s cook.

And there was the knoll just before us—
Some two hundred paces or more;
With barb-wire and bayonets bristling,
And the parapets sloppy with gore.
And the howitzers roared like perdition
And vomited fire and death;
Till we saw it was madness to charge them,
And halted a moment for breath. 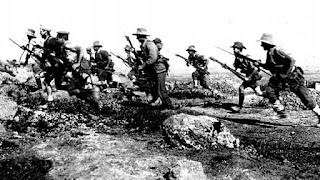 Ah, stranger, imagine the picture,
And then stand with horror aghast—
We had fought for a month without sleeping,
And we stood facing failure at last!
We had squandered the best of our Army,
We had “stuck” to our ultimate gasp;
And there, in the moment of triumph,
The prize was to slip from our grasp.

Then suddenly out sprang the Major,
His face lighted over with bliss—
“Pass the word there for Lance-Private Wilson;
He’ll find us a way out of this!”
(If there’s one thing I hate, it is skiting*
When I hear it I always feel sore,
So you won’t think I boast when I tell you
He ought to have done it before!)

And a great cheer arose as I faced him
And nodded (I never salute),
And said to him: “I’ll see you thro’, sir,
And win you some glory to boot.
The chaps of the 16th Battalion
Are not easy snoozers to beat;
I’ve a notion (I says) that will lick them—
‘Arf a dollar I line them a treat!

“I don’t want no red-tapey orders,
And I don’t want no kudos nor pelf;
You get back to your own little dug-outs,
And I’ll tackle the knoll by myself!
I’ll lay down my life for my country,
For old England, the land of the free;
And you’ll find that the bloke called Horatius 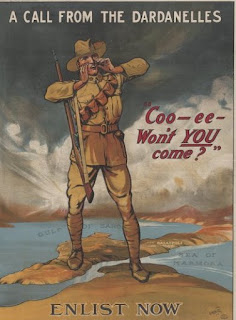 Was only a trifle to me!”

Then I shook hands with all the battalion
(There were only thirteen of us left),
And they cheered me again till the foemen
Must have thought us of senses bereft.
And I gathered my arms and my rations,
And girded myself for the fray—
If I live to be ninety or over,
I will always remember that day!

I had five hundred rounds for my rifle,
And of hand bombs I took forty-one;
A machine-gun was slung to my shoulders,
And I carried a periscope gun.
As for rations—well, all I took with me
Was a tin of Fray Bentos* or two,
And in my breast pocket I planted
A nice Army biscuit to chew.

Then I waved a farewell to my cobbers—
I was much too affected to speak;
There are times when the bravest of soldiers
Have feelings that render them weak.
One tear—then I turned to the trenches,
And charged like a lion at bay
As I caught the last words of our Colonel,
Crying: “Bonzer* … Gorstrafem … Hooray!” 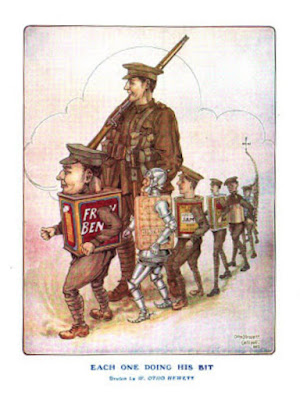 You talk of charmed lives –I’d a thousand;
As I rushed up that hill like a goat
I got thirty-two shots thro’ my trousers
And nine shrapnel balls thro’ my coat;
And a Japanese bomb burst beneath me
—For a moment I gave up all hope,
But it proved the best thing that could happen,
For it pushed me half-way up the slope.

Then a fifteen-inch shell came straight at me
—I hadn’t a moment to shirk—
But it struck on that hard Army biscuit
And rebounded—and blew up a Turk!
You doubt it? Well if you want proof, sir,
The truth of this tale to endorse,
Here’s the biscuit—that dent in the middle
Is where the shell struck it, of course!

Ah yes, ‘twas a terrible moment;
I was then slightly wounded, ‘tis true—
Just a bayonet stab in the gizzard
And a crack from a bullet or two.
But I gathered new strength for the conflict,
And, just as the darkness came down,
I was under their parapets, resting,
And I knew I had beaten them brown! 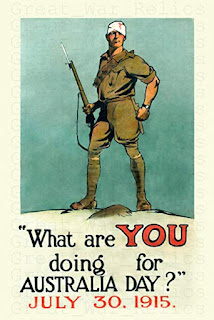 The morning broke, smiling and peaceful—
Ah, shame, that we soldiers must fight—
‘Twas a piteous scene met my vision
With the first rosy quivers of light.
When I peeped in the trench, not a Turk, sir,
Was left of that legion accurst—
For they’d whacked the Fray Bentos among them,
And each man had perished from thirst.