In Flanders Fields: An Echo

John McCrae’s “In Flanders Fields” was one of the most popular poems of the war and continues to be read, recited, and studied today. A recent student study guide argues that the poem is “adaptable to any number of circumstances beyond the occasion for which it was written,” because anyone who has been defeated or known others who have sacrificed for a cause “can relate to the speaker’s desire that the ‘torch’ will be carried on by someone else who finds the cause, or the defeated combatant, honorable.”*

In 1920, the Dunbar Entertainer published “In Flanders Fields: An Echo,” a poem that challenged Americans to uphold the light of justice and extinguish the burning crosses and flames of hatred that scarred the landscape of post-war America.

In Flanders Fields
An Echo 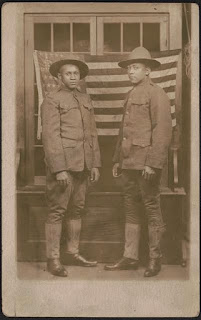 In Flanders fields the poppies blow
Between the crosses, row on row
That mark the graves where black men lie;
Their souls, long wafted to the sky,
Look down upon the earth below.

E’en while we mourn their loss, we see
Their brothers hanged upon a tree
By whom they saved. Their pain fraught cry
Mounts up to those who stand on high
And watch the scarlet flowered sea
In Flanders fields.

In Flanders fields they shall not sleep!
No! For their murdered kin they keep
A vigil through the day and night,
‘Til God Himself shall snatch from sight
Such scenes as make our heroes weep
In Flanders fields.
—Orlando C. W. Taylor (1920, Dunbar Entertainer)

The Tuskegee Institute estimates that in the 86 years between 1882 and 1968, at least 4,743 people were lynched in the United States; 3,446 of them were African Americans. As African American troops returned home from the war that had “promised to make the world safe for democracy,” they confronted a new battle:
Many black veterans were denied the benefits and disability pay they’d been promised. In the first summer after the war, known as the Red Summer, anti-black riots erupted in more than twenty American cities, including Houston, Chicago, and Washington, D.C. “This is the right time to show them what will and what will not be permitted, and thus save them much trouble in the future,” one Louisiana newspaper opined, in an editorial titled “Nip It In the Bud.” In the years after the war, at least thirteen black veterans were lynched. Countless more survived beatings, shootings, and whippings.*** 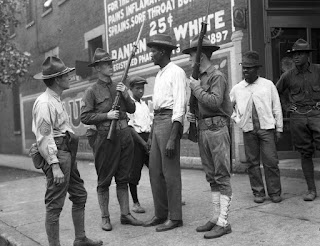