Shot at Dawn: in the First World War, 306 men who fought with the British Army were executed, typically by men in their own unit, after court martials found them guilty of desertion or other acts of cowardice. It is estimated that the French executed over 600 of its soldiers for cowardice (many think this number is actually much higher, due to the French practice of decimation—shooting every 10th man in units that mutinied or refused orders to attack). Italians executed an estimated 750 men; Austria-Hungary shot over 1,100 of their soldiers, and the Germany Army executed 48 of their own men during the Great War.*

It is now believed that many of the men convicted of desertion, cowardice, and refusing to follow military orders suffered from shell-shock or Post Traumatic Stress Disorder (PTSD), but at the time of these executions, military authorities were nearly always more concerned about setting an example and maintaining discipline than they were about attending to the specifics of individual cases.

Herbert Read was a Yorkshire farmer’s son whose studies at the University of Leeds were interrupted by the war.  Serving in France and Belgium with the Yorkshire Regiment, Read’s conduct in battle earned him the Military Cross and Distinguished Service Order, but he was no stranger to fear. In his posthumously published essay "The Cult of Sincerity," Read writes,

I have never written about the real horror of fighting, which is not death nor the fear of mutilation, discomfort or filth, but a psychopathic state of hallucination in which the world becomes unreal and you no longer know whether your experience is valid—in other words, whether you are any longer sane.

In 1919, shortly after the war had ended, Herbert Read published Naked Warriors, a collection of poems he had written during the war.  The poem “Fear” is one of six short imagist poems collected under the title “The Scene of War.” 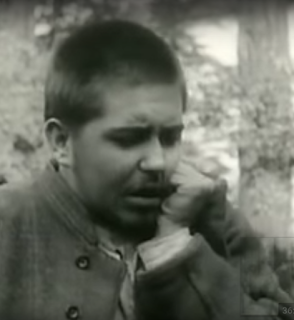 Fear is a wave
Beating through the air
And on taut nerves impingeing
Till there it wins
Vibrating chords.

All goes well
So long as you tune the instrument
To simulate composure.

(So you will become
A gallant gentleman.)

But when the strings are broken . . . .
Then you will grovel on the earth
And your rabbit eyes
Will fill with the fragments of your shattered soul.
--Herbert Read

Read’s poem uses the metaphor of music and sound to let us feel the horrors of shell shock.  Fear is compared to an eroding wave that beats against the shore or to a concussive blast of sound that hammers at the skull.  It strikes at nerves stretched to the breaking point until they resonate with an unholy, dissonant music.  And once tuned to fear, the mind vibrates with panic and horror until its strings snap.

A broken thing, the man trapped in the siren song of fear is reduced to an animal-like state. He crouches close to the earth, trembling with terror and blinded to all but his own shattered self. 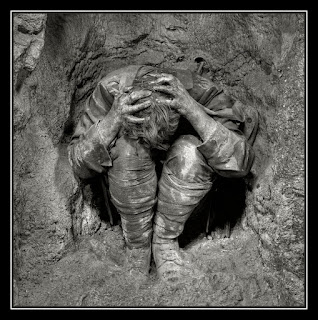 The only hope in holding out against the beating wave of fear is to “simulate composure,” to pretend to a courage one cannot feel, to fake a calm that is patently absurd in a situation fraught with peril. With quiet irony, the poem reveals that if a man's acting is good enough, then he will be proclaimed “a gallant gentleman,” chivalrously brave and full of noble daring.

According to Read’s biographer David Goodway, “Survival, as he [Read] said elsewhere, came through the members of a community being with each other in real communion….His concern to show courage was not just so as to prove himself, but because that quality was essential for the survival and success of the whole group.  Read was obsessively determined not to betray his own men through cowardice” (34).

In the Preface to his 1919 poetry collection, Read sharply rebuked anyone who might seek to romanticize the war or to ignore the toll it had taken on men who had endured the unimaginable:


*Further research on executions in the First World War can be found in Steven R. Welch’s article “Military Justice” in the online 1914-1918 encyclopedia.
Posted by Connie R. at 10:14 PM No comments:

Email ThisBlogThis!Share to TwitterShare to FacebookShare to Pinterest
Labels: Read

The battle of the Somme began on July 1, 1916; the death and misery lasted until November 18th of that year. Sidney Rogerson, an officer with the 2nd battalion of the West Yorkshires, described conditions on the Somme in November of 1916:
I had not gone twenty yards before I encountered the mud, mud which was unique even for the Somme. It was like walking through caramel. At every step the foot stuck fast, and was only wrenched out by a determined effort, bringing away with it several pounds of earth till legs ached in every muscle. No one could struggle through that mud for more than a few yards without rest. Terrible in its clinging consistency, it was the arbiter of destiny, the supreme enemy, paralysing and mocking English and German alike. Distances were measured not in yards but in mud.*
From November 13-18, in what has been called the “last shove of the Big Push,” British troops launched their final offensive: the Battle of Ancre. The week-long bombardment before the attack was staggering, with artillery fire twice as heavy as that preceding the July 1st offensive. Although the attack was considered a success – the towns of St. Pierre Divion, Beaumont Hamel, and Beaucourt were taken – the gains came at great cost: over 22,000 British troops were killed or wounded.
A.P. Herbert was a young officer with the Royal Naval Division (RND).  His unit was virtually obliterated in the fighting at Beaucourt: of the 435 men who attacked the village, only 20 escaped serious injury or death and were able to continue the fight the following day.  Herbert was one of the twenty; his poem “Beaucourt Revisited” recounts the haunted memories of a survivor.
Beaucourt Revisited
I wandered up to Beaucourt; I took the river track,
And saw the lines we lived in before the Boche went back;
But Peace was now in Pottage, the front was far ahead,
The front had journeyed Eastward, and only left the dead.

And I thought, how long we lay there, and watched across the wire,
While guns roared round the valley, and set the skies afire!
But now there are homes in HAMEL and tents in the Vale of Hell,
And a camp at suicide corner, where half a regiment fell.

The new troops follow after, and tread the land we won,
To them 'tis so much hill-side re-wrested from the Hun
We only walk with reverence this sullen mile of mud;
The shell-holes hold our history, and half of them our blood.

Here, at the head of Peche Street, 'twas death to show your face;
To me it seemed like magic to linger in the place;
For me how many spirits hung around the Kentish Caves,
But the new men see no spirits – they only see the graves.

I found the half-dug ditches we fashioned for the fight,
We lost a score of men there –  young James was killed that night;
I saw the star shells staring, I heard the bullets hail,
But the new troops pass unheeding – they never heard the tale.

I crossed the blood-red ribbon, that once was No-Man's Land,
I saw a misty daybreak and a creeping minute-hand;
And here the lads went over, and there was Harmsworth shot,
And here was William lying – but the new men know them not.

And I said, "There is still the river, and still the stiff, stark trees,
To treasure here our story, but there are only these";
But under the white wood crosses the dead men answered low,
" The new men know not BEAUCOURT, but we are here – we know."
–  A.P. Herbert

Sober and reflective, the poem tells of a soldier who passes the scene of an earlier battle. In the First World War, trench lines hardly moved at all, and so it was not uncommon for battles to be fought repeatedly over the same ground (Edmund Blunden’s poem “Festubert, 1916” also revisits the site of a previous battle and is a thought-provoking companion piece to Herbert’s poem).

Although the Front has moved on, the dead have been left behind, and in a series of disorienting flashbacks, the horrors of the past are superimposed upon the present. The speaker sees again the places where “young James was killed,” where Harmsworth fell under gunfire, and where William lay dying, but these scenes of helpless tragedy are now situated well behind the front. Camp sites, homes, and tents have been erected, and only the rows of grave crosses give any hint of the hell that men endured here.

New recruits have been brought up to replace the dead of the earlier battle, but the fresh troops “pass unheeding,” neither wanting nor needing to know the personal stories of those who will never return home nor join the fight again. But the survivor remembers: he lives alone in a surreal world of memory.


One of the stories that haunted Herbert was that of a fellow officer who was court martialed for failing in his duty in the attack at Beaucourt.  After the war, Herbert published a novel heavily drawing upon his own experiences, The Secret Battle. The novel tells of Harry Penrose, a young officer whose nerves fail him during an attack. Court-martialed for desertion, Penrose is found guilty and shot at dawn for cowardice. His story is almost certainly based upon the true account of twenty-one-year-old Edwin Dyett, also an officer of the RND who was shot by men from his own unit. Blindfolded and tied to a stake, Dyett's last words were, “Well, boys, goodbye.  For God's sake, shoot straight.”

In his novel, Herbert writes,


And if the Court had been able to imagine themselves in Harry’s condition of mind and body, crouching in the wet dark under that bank, faint with weariness and fear, shaken with those blinding, tearing concussions, not knowing what they should do, or what they could do, perhaps they would have said in their hearts, ‘I will believe that story.’ But they could not imagine it.  For they were naturally stout-hearted men, and they had not seen too much war. They were not young enough.**

As Herbert so poignantly argues in his novel and in the poem “Beaucourt Revisited,” perhaps it is only the young and the dead who can fully grasp the hard truths of war.