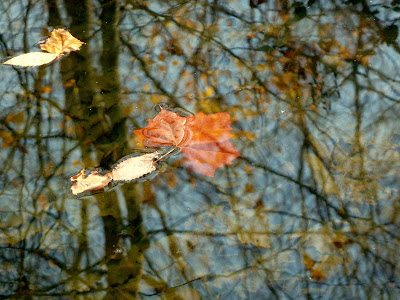 The English Romantic poet John Keats described autumn as the “season of mists and mellow fruitfulness,” but fall is more typically associated with melancholy and loss. Ernest Rhys, a Welsh poet of the First World War, compared the leaves of autumn to fallen soldiers of the war:  “small folk,/ faded, and fain/To give up their life” (“The Leaf Burners”).

More intimately, American poet Wallace Stevens also likened the dead of the war to the season of autumn, but his poem “The Death of a Soldier” examines the loss of a single man.

The Death of a Soldier 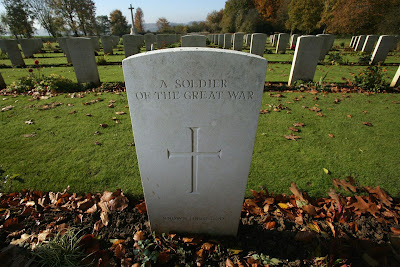 Life contracts and death is expected,
As in a season of autumn.
The soldier falls.

He does not become a three-days’ personage,
Imposing his separation,
Calling for pomp.

Death is absolute and without memorial,
As in a season of autumn,
When the wind stops.

When the wind stops and, over the heavens,
The clouds go, nevertheless,
In their direction.
--Wallace Stevens

As natural as the change of the seasons is the death of a soldier; a man’s life narrows to a single focal point of duty and orders, and “death is expected.” Yet for the common infantry soldier (each of whom is not common at all to those who know and love him) death is accompanied by neither fame nor processions. His body does not lie in state; his photo does not appear in the newspaper with tales of his courage.  Instead, his name appears among hundreds of others, a small line of print in the casualty lists, and his body is hastily buried – if it can be found. 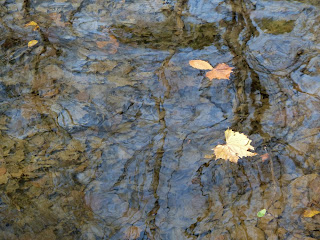 Despite this ordinary death, Stevens’ poem asks us to pause, to be still, and to honor the moment when one soldier falls, “As in a season of autumn,/When the wind stops.” Each fallen man is worthy of that moment of silence.

The highly condensed three-line verses remind us of a life over too soon, and the final line of each stanza is brief and blunt, mirroring the soldier’s abrupt end.  The clouds continue to pass across the sky; the army marches on without this one man, and those he loved and left must also soldier on, although their lives are the poorer for the loss.  The poem forces us to acknowledge that the death of a soldier in battle is nothing remarkable, but rather an expected event in the nature of war.

Wallace Stevens is a key figure in the development of American modernist poetry, but his war poems have been largely forgotten.  Thirty-seven-years old when America entered the war, Stevens did not serve in the American Expeditionary Force, but continued to work as an insurance agent in Hartford, Connecticut. His poem “Death of a Soldier” was written from the home front nearly one-hundred years ago, and yet it still challenges readers today, asking us to consider the too-often underestimated human costs of war. 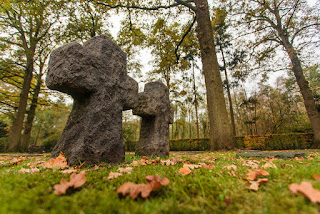