We few, we happy few, we band of brothers;

For he to-day that sheds his blood with me

Shall be my brother; be he ne'er so vile,

This day shall gentle his condition;

And gentlemen in England now a-bed

Shall think themselves accurs'd they were not here,

And hold their manhoods cheap whiles any speaks

That fought with us upon Saint Crispin's day.

Kings, emperors, industrialists and aristocrats: the wealthy and powerful have always needed the poor to fight in their wars and have promised rewards and honors for that service. In October of 1914,  American poet Christopher Morley wrote of the disparity between rich and poor, starkly contrasting the burdens each were expected to shoulder in the First World War.

Peasant and King
What the Peasants of Europe are Thinking
You who put faith in your banks and brigades,
Drank and ate largely, slept easy at night,
Hoarded your lyddite and polished the blades,
Let down upon us this blistering blight—
You who played grandly the easiest game,
Now can you shoulder the weight of the same?
Say, can you fight?

Here is the tragedy: losing or winning
Who profits a copper? Who garners the fruit?
From bloodiest ending to futile beginning
Ours is the blood, and the sorrow to boot.
Muster your music, flutter your flags,
Ours are the hunger, the wounds, and the rags.
Say, can you shoot?

Down in the muck and despair of the trenches
Comes not the moment of bitterest need;
Over the sweat and the groans and the stenches
There is a joy in the valorous deed—
But, lying wounded, what one forgets
You and your ribbons and d——d epaulettes—
Say do you bleed?

This is your game: it was none of our choosing—
We are the pawns with whom you have played.
Yours is the winning and ours is the losing,
But, when the penalties have to be paid,
We who are left, and our womenfolk, too,
Rulers of Europe, will settle with you—
You, and your trade.
October, 1914.
—Christopher Morley

The poem appeared in Morley’s Songs for a Little House (1917). Similar sentiments are voiced in Siegfried Sassoon’s “They” and Grace Isabel Colbron’s “The Ballad of Bethlehem Steel.”
Morley was one of the most prolific writers of the early twentieth-century, author of more than 100 novels, essay collections, and poetry volumes. He was perhaps best known for his 1939 novel Kitty Foyle, which was made into a popular film. When Morley died in 1957, his obituary in the New York Times recalled that he was “Known for his whimsy—a word he loathed to hear in reference to his works” and that he “preferred to regard himself as a poet above all else.”*

“In Flanders Fields,” written by John McCrae in May of 1915, is perhaps the best known Canadian poem of the war. But Katherine Hale’s “Grey Knitting,” published in December of 1914, was enormously popular during the war and in the years immediately following. In less than six weeks, Grey Knitting and Other Poems ran into four editions of a thousand copies each; an American journalist wrote, “Katherine Hale has established herself as a favourite with American editors. . . . ‘Grey Knitting’ is going the rounds of the newspapers on this side of the line,” and the poem was included in the 1921 Standard Canadian Reciter: A Book of the Best Readings and Recitations from Canadian Literature.*

In 1917, Lilian Whiting in Canada, the Spellbinder wrote, “Perhaps no poem of the war has more closely touched the universal heart than has ‘Katherine Hale’s’ poem, so intense in its restrained power.”** Today, Hale’s war poetry is dismissed as “sentimental and patriotic,” while “Grey Knitting” has been described as “a disturbing misrecognition of institutionalised violence: it mistakes suffering for gaiety and finds in bloodshed a transcendence that discredits Hale as a critical commentator on war.*** 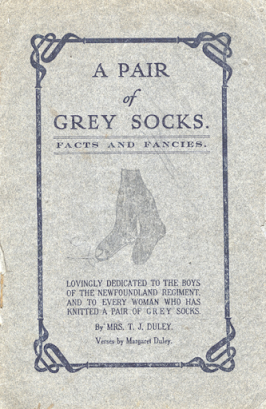 All through the country, in the autumn stillness,

A web of grey spreads strangely, rim to rim;

And you may hear the sound of knitting needles,

Elfin amid the gianthood of war;

Whispers of women, tireless and patient,

Who weave the web afar.

Whispers of women, tireless and patient—

“Foolish, inadequate!” we hear you say;

“Grey wool on fields of hell is out of fashion,”

And yet we weave the web from day to day.

Under the alien skies, in his last hour,

Should listen, in death’s prescience so vivid,

And hear a fairy sound bloom like a flower—

For the white Christ on fields with shame sown deep,

As they fall fast asleep.

The poem mystically shrinks the distance between the home front and the battlefield. Fairy enchantments and woven webs of love and homespun yarn comfort dying soldiers, whispering to them of the mothers, sisters, wives, and sweethearts laboring on their behalf. And although men die, it is women who haunt the battlefield, participating in the war with knitted work that is both highly emotional and immensely practical.

Katherine Hale was the pseudonym of Mrs. John W. Garvin. Born Amelia Warnock in Galt, Ontario, by the time of the Great War, Hale had “attained distinction in literary and music criticism, poetry, short stories, essays, and in literary and song recitals.”† After the war, Hale published Morning in the West (1923), a free-verse collection of poems that explores modernist themes such as the environment, nationalism, gender roles, and the shaping power of legend and myth, all within a Canadian setting. Katherine Hale died in 1956, and in her obituary, her friend Lotta Dempsey quoted from a letter Hale had written earlier: “I believe that one just has to take every experience fearlessly and saturate it with life, expurgate ruthlessly the un-essentials and then, as best one can, re-think it into poetry….But everyone has his own method; and after all, so far as the boundless world of art is concerned, we are all like pigmies, lost in its tremendous ramifications. ††