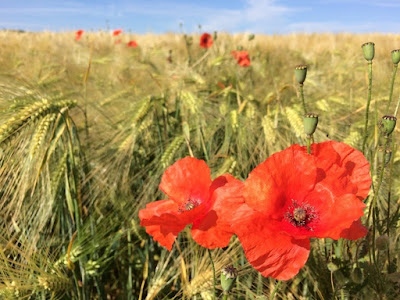 It’s a mysterious poem that has been given various titles: “A Farmer’s Grace,” “Silver Rain,” “Mealtime Blessing,” and “Scarlet Poppies,” but most sources call it “The Harvest” and name its author as Alice C. Henderson (most likely Alice Corbin Henderson, the associate editor of Poetry magazine from 1912 – 1922).* 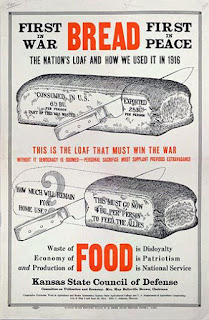 The silver rain, the shining sun
The fields where scarlet poppies run
And all the ripples of the wheat
Are in the bread that we now eat.

And when we sit at every meal
And say our grace we always feel
That we are eating rain and sun
And fields where scarlet poppies run.
—Alice C. Henderson

Given the images of plentiful grain and mealtime grace, it’s easy to see why the poem is popular at Thanksgiving.  It reminds us that we are all connected to the earth that provides our food, but other connections and reminders are also seeded throughout the poem.  If the poem were written during or after the First World War, the scarlet poppies would also readily evoke memories of John McCrae’s “In Flanders Fields” and the numerous other poems that associated the poppies of the Western Front with the dead of the Great War. 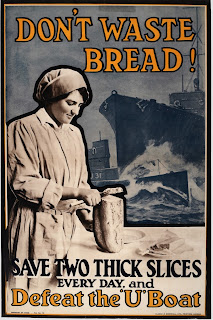 The scarlet poppies in “The Harvest” do not bloom or wave in the fields – they run in the way that blood runs on battlefields.  And during the war, food was deeply connected with fighting.  Citizens were reminded of the fact in the rationing posters that were everywhere:

“Don’t Waste Bread! Save Two Thick Slices Every Day and Defeat the “U” Boat
“Victory is a Question of Stamina – Send the Wheat, Meat, Fats, Sugar – the Fuel for Fighters”
“This is the loaf that must win the war”
“Waste of FOOD is Disloyalty; Economy of FOOD is Patriotism; Production of FOOD is National Service”

Even the poem’s title, “The Harvest,” suggests the grim harvest of battle and the millions of young men who had died, feeling a deep connection to their homelands. (Rupert Brooke’s “If I should die, think only this of me; / That there’s some corner of a foreign field / That is for ever England” is the best-known example).

“The Harvest” is a prayer of thanksgiving for rain and sun and wheat and poppies – and perhaps also for the soldiers who are buried on the fields of the First World War.  Those who eat the rain and sun are also partaking in a communion with the dead as they literally eat the bread of sacrifice.  If “The Harvest” is a thanksgiving grace, it closes not with “Amen,” but “Lest We Forget.” 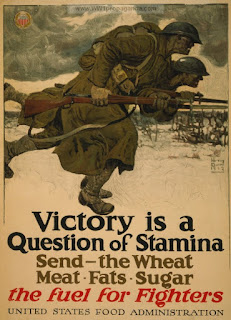 To the Patriotic Lady

In the summer of 1917, soldiers of the 24th U.S. Infantry Regiment—which had originated with the Buffalo Soldier regiments of the West and had served honorably in the Philippines and Mexico—were ordered from New Mexico to Texas.  Assigned to guard the construction of a new military installation, Camp Logan, the soldiers arrived in Houston on 28 July 1917.  Almost from the first, the black soldiers were the targets of virulent racial discrimination that frequently extended to abuse and assault.

Tensions escalated, and on August 23rd, Private Alonzo Edwards came to the aid of a black woman whom he felt was the victim of police abuse; he was pistol-whipped and arrested. When a respected black Corporal tried to learn more about Edwards’ imprisonment, he was also beaten.  Attempting to flee, he was shot at, captured, and also imprisoned. Back at the military base, false rumors of the Corporal’s murder and of the advance of a white mob provoked black soldiers to arm themselves and march on Houston, exchanging gunfire with police and civilians in a situation that had spiraled out of control. By the end of the night, four black soldiers, two black civilians, and sixteen whites were dead.* 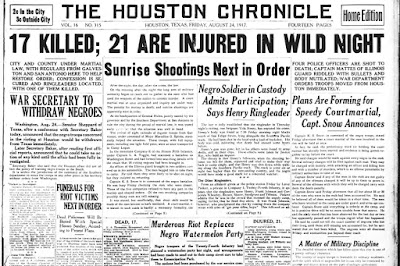 The first of three military court martials charged 63 black soldiers with aggravated assault, mutiny, and murder, making it the largest murder trial in U.S. history. The court appointed one man to defend the 63 soldiers; Major Harry S. Grier, a teacher of law at West Point, was not a lawyer and had no trial experience.  Forty-one of the accused were sentenced to life in prison and 13 were condemned to death.  On 11 December 1917, without public notice, the 13 men were hurriedly hung and buried in graves marked only with the numbers one through thirteen. By the end of the three court martials, 118 men had been charged with serious crimes, and of these, 110 were found guilty; 53 black soldiers were sentenced to life in prison, while 29 more received the death sentence.**

The case still generates controversy, but nearly all historians agree that while some of the soldiers were undeniably guilty, the trial was not fair, the accused were denied the right to appeal, and it is highly probable that innocent men were unjustly condemned.  An article published in the Houston Chronicle one-hundred years after the riot makes the point that it is “an ugly tale with no heroes.” ***

Perhaps the key contributing factor to the tragedy was that for the men of the 24th Infantry, “Wherever they had been sent, their race had never overtly been an issue.  But on July 28, as they got to Houston, they found it was all that mattered.” ***

Race matters were inextricably intertwined with U.S. participation in the First World War and shaped the ways in which American citizens thought about the war, who should fight, and what they were fighting for.  In November of 1917 the New York Call, a leading socialist newspaper, published on its editorial page a poem that juxtaposes racial attitudes with America’s motives for entering the World War.

To the Patriotic Lady across the Way

She wore a Liberty loan button
And above it a silken American flag,
And her knitting needles clicked
Through some soldier’s sweater.
A youth came on the subway
And sat beside her—
A comely youth, neat, intelligent,
Yes, even respectable;
But his skin was black
And his lips were thick
And his nose was broad and flat.
She gathered her knitting needles together
In unseemly panic,
And as she fled, with disdainful nose, tip-tilted,
To the lower end of the car
I noticed that she wore a Liberty loan button
And a silken American flag—
And I do believe she thinks she’s helping
To make the world safe for democracy.
—Zelda

The woman on the subway appears in every way to be a true patriot: she has purchased a Liberty Bond and proudly wears the button that proves it.  Just above that button, she displays her national pride with an American flag lapel decoration, and she donates her time in knitting for soldiers. Yet her charity is quickly packed away when a black youth enters the subway and sits beside her. Unable to recognize his character or intelligence, she sees only his race.  With disdain and fear, the “Patriotic Lady” moves as far from this “other” as she can, denying his right to join her world.

In exposing the Patriotic Lady’s hypocrisy, the poem criticizes U.S. involvement in the war itself. It insists that war supporters who fight to ensure democratic rights for the peoples of Europe cannot continue to deny liberty and justice to all Americans. In July of 1917, Hubert Harrison, the president of the Liberty League of North America, protested at a New York City rally,
‘They are saying a great deal about democracy in Washington now,’ but, ‘while they are talking about fighting for freedom and the Stars and Stripes, here at home the white apply the torch to the black man’s homes, and bullets, clubs, and stones to their bodies.’†

And yet 400,000 African-Americans volunteered or were drafted into the American Expeditionary Force and 200,000 served in France. W.E.B. Du Bois appealed to black Americans,
Let us, while this war lasts, forget our special grievances and close our ranks shoulder to shoulder with our own white fellow citizens and the allied nations that are fighting for democracy.  We make no ordinary sacrifice, but we make it gladly and willingly with our eyes lifted to the hills.

While the anonymous Zelda of The Call is unlikely to have supported the war, she might have sympathized with Lucian B. Watkins, a sergeant with the US 92nd Division who defended black hopes and aspirations in his poem “The Negro Soldiers of America: What We Are Fighting For”:
We fight—for all who suffer pain,
We give our souls in sympathy;
We fight that Liberty may reign
From Berlin until Tennessee.†††