In September of 1918, a physician wrote from Camp Devens, Massachusetts, “It is only a matter of a few hours … until death comes and it is simply a struggle for air until they suffocate. It is horrible. One can stand to see one, two, or twenty men die, but to see these poor devils dropping like flies gets on your nerves. We have been averaging about 100 deaths a day, and still keeping it up.”* Colonel Victor C. Vaughan, former president of the American Medical Association,  also visited the US military camp and reported, “In the morning the dead bodies are stacked about the morgue like cord wood. This picture was painted on my memory cells at the division hospital, Camp Devens, in the fall of 1918, when the deadly influenza virus demonstrated the inferiority of human interventions in the destruction of human life.”* 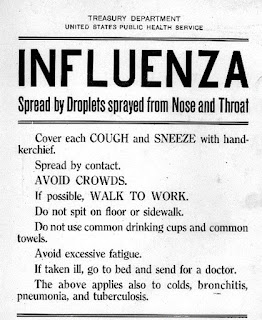 Some Americans thought that the 1918 influenza virus was a German weapon of war, released by enemy agents who had arrived in Boston with vials of the germs; others suspected that the German pharmaceutical company Bayer had mixed the virus into aspirin.* German propaganda  blamed the illness on Chinese laborers employed by the Allied Powers.”**

By the end of the world-wide pandemic, at least 20 million had died; estimates range from 20 – 100 million, with most experts believing more than 50 million were killed by the virus. What became known as Spanish Influenza was particularly fatal to healthy adults between the ages of 20 and 40.

With no known cure, most efforts were directed at stopping the spread of the illness. Historian David McCullough writes, “In Boston the stock market closed. In Pennsylvania a statewide order shut down every place of amusement, every saloon. In Kentucky the Board of Health prohibited public gatherings of any kind, even funerals.”*** And an Albuquerque New Mexico newspaper wrote,  “the ghost of fear walked everywhere, causing many a family circle to reunite because of the different members having nothing else to do but stay home.”†

In the chaos and uncertainty that accompanied the virulent pandemic, lists of practical health guidelines were published in nearly every major newspaper. One writer used poetry to spread the message:

Oh, shun the common drinking cup,
Avoid the kiss and hug,
For in them all there lurks that Hun,
The influenza bug. 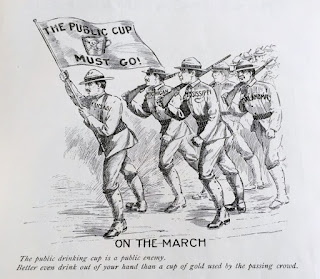 Cough not, nor sneeze when in a crowd;
‘Tis neither kind nor neat,
Because it scatters germs around.
So try to be discreet.

Lick not the thumb in turn o’er
The papers in your file,
And wear your health mask, though you look
Like time. Forget it. Smile.

Remember doorknobs harbor germs,
So wash before you eat.
Avoid the flying clouds of dust
While walking on the street.

The poem’s author, Dr. C.E. Waters, worked during the First World War at the Bureau of Standards as chief of the Organic Chemistry section. Prior to the war, he had taught at Connecticut Agricultural College and Johns Hopkins University. The poem appears in The Great War at Home and Abroad: The World War I Diaries and Letters of W. Stull Holt. In a letter dated October 25, 1918, Holt’s fiancée, Lois Crump, included the verse with the note, “I am enclosing some stuff which may make you laugh” (Crump worked at the Bureau of Standards).††

Few have heard of Lola Ridge, the modernist poet who has been compared to Emily Dickinson, Siegfried Sassoon, and the Georgian trench poets. She was an anarchist who protested the execution of Sacco and Vanzetti; she was arrested with Edna St. Vincent Millay; and she was an immigrant who defended the poor and oppressed, challenging readers to confront the ugly realities of prejudice and suffering. When Ridge died in 1941, her obituary in the New York Times described her as “one of the leading contemporary poets” who “found in the meeting of many races in America the hope of a new world.”* Ridge’s 1918 poetry collection The Ghetto included her war poem “The Song.”

That day, in the slipping of torsos and straining flanks on the bloodied ooze of fields plowed by the iron,
And the smoke bluish near earth and bronze in the sunshine floating like cotton-down,
And the harsh and terrible screaming,
And that strange vibration at the roots of us …
Desire, fierce, like a song …
And we heard
(Do you remember?)
All the Red Cross bands on Fifth avenue
And bugles in little home towns,
And children’s harmonicas bleating

And after …
(Do you remember?)
The drollery of the wind on our faces,
And horizons reeling,
And the terror of the plain
Heaving like a gaunt pelvis to the sun …
Under us—threshing and twanging
Torn-up roots of the Song …
—Lola Ridge

In a series of concentrated images, the poem juxtaposes the suffering of soldiers with the patriotic music that sent them to war. As muscles scream with the effort of moving through mud, blood, smoke and artillery fire, soldiers feel a fierce desire to live as a “strange vibration at the roots of us,” resonating like song. And that desire evokes the memory of send-off parades accompanied by the notes of bugles and the sound of children playing patriotic tunes from New York City to “little home towns,” all “bleating,” as if piping sheep to the slaughter: “AMERICA!”

In the aftermath of an attack, some soldiers find themselves alive, and even the touch of the breeze seems whimsical. But terror lurks just beneath the surface, and the old songs, mutilated by war, can never be heard in the same way again. As in many of her other poems, Ridge describes individuals “stretched to the limits of existence” and she “confronts the bystander as complicit in the suffering of others by virtue of the gaze.”** 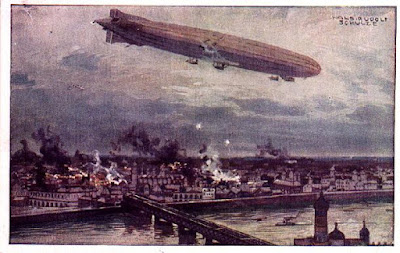 On the night of January 19, 1915, the first German zeppelin attacks in England targeted cities and towns on the Norfolk coast. London’s first zeppelin attack occurred on May 31, 1915 when 90 incendiary bombs and 30 grenades fell on the city. Seven people were killed and thirty-five were wounded. By war’s end, the death toll in London from zeppelin raids neared 700, and an estimated 2,000 people had been seriously wounded. Nancy Cunard’s poem “Destruction” speaks of the devastating powerlessness felt by many. 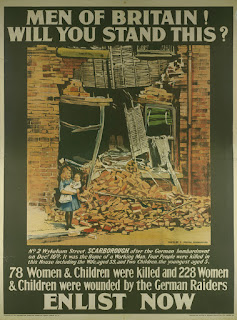 I saw the people climbing up the street
Maddened with war and strength and thought to kill.
And after followed Death, who held with skill
His torn rags, royally, and stamped his feet.

The fires flamed up and burnt the serried town
Most where the poorer, humbler, houses were;
Death followed with proud feet and smiling stare,
And the mad crowds ran madly up and down.

And many died and hid in unfound places
In the black ruins of the frenzied night.
Yet Death still followed in his surplice, white
And streaked, in imitation of their faces ….

But in the morning, men began again
To mock Death—laughing at their bitter pain.
—Nancy Cunard (from Wheels, second edition, 1917)

Iris Tree, Nancy Cunard’s friend, wrote that during the war the two women were bound by “loneliness and death”: 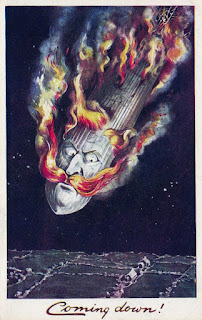 Together we had braved the panic of first bombings over London, and watched their fires redden on sky and river, ourselves burnt out by the terrible gaieties of last encounters, now made unreal by the unrealities of war—all the metal and struggle, trains, ships, mourning, noise of unknown distances from which we were excluded as figures of illusion—a theme that left its shadow on us both in different ways.**

A VAD nurse living in north London remembers being awakened in the night by her landlady’s cry “For the love of God, Miss McAllister, get up!” Agnes McAllister recalls, “you could see for miles around and with all the searchlights there it looked like a big silver cigar in the sky. And it fascinated me beyond everything.” With her son, Agnes’s landlady crawled under the bed and pleaded with Agnes to come away from the window, but she refused saying, “‘If anything’s happening to me, I’d rather see it coming.’ And then as it got near, it was like an express train over your head it was the incredible noise that it made. But, you know, they were fascinating with the light on them like big silver cigars coming along.”***

The first lines of Cunard’s poem “And If the End Be Now?” express the surreal changes that confronted civilians at war: 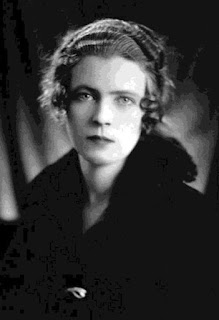 The rooms are empty and the streets are bare,
No lovers meet at midnight under the stars,
And the past pleasures of congenial hours
Forgotten lie; yet now these flowers that fade
Once dressed the gardens with gay delight.
Ah, patiently we must grow friends with grey,
Put out of mind the colour of the flame
And the triumphant songs of inspiration;
Obliterate adventure, memory.
The silence of desertion has begun
And the slow madness of annihilation….

By 1916, at least seven of Nancy Cunard’s friends had been killed in battle, among them Patrick Shaw-Stewart and Julian and William Grenfell. She struggled with survivor’s guilt, and by 1919 “her intense awareness of the war and its costs in human lives … led to a nervous breakdown.”****
* The poem, with alterations, was later published as “Zeppelins” in Cunard’s 1921 collection, Outlaws.
** Iris Tree, We Shall Not Forget, p. 21, cited in Nancy Cunard: Heiress, Muse, Political Idealist by Lois Gordon, Columbia UP, 2007, p. 59.
*** “Voices of the First World War: Zeppelins over Britain,” Imperial War Museum, https://www.iwm.org.uk/history/voices-of-the-first-world-war-zeppelins-over-britain.
**** Lois Gordon, Nancy Cunard: Heiress, Muse, Political Idealist, Columbia UP, 2007, p. 52.
Posted by Connie R. at 10:20 PM 2 comments: