Where do we go from here?


“What a good time the women are having in the war! And, in a way, they really are. For into that somewhat drab thing called every-day life has come the call of duty that makes every one, man, woman, and child, who has red blood, get up and do whatever duty bids.”
—Cleveland Plain Dealer, Oct. 28, 1917*

In 1919, the Souvenir Publishing Company printed two books within one binding: Nice Poems by Nice War Workers and Naughty Poems by Naughty War Workers, compiled by Jean of the A.G.O. Each half of the book had its own title page and thirty-two pages of poetry, with titles such as “Buy a Bond” (from Nice Poems) and “Me for the Cave-Man Stuff” (from Naughty Poems). The Nice Poems section of the book also included a poem that parodied a popular song of the day: 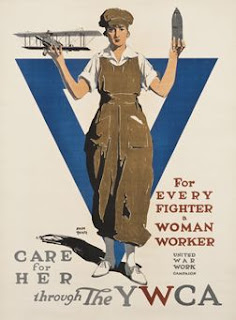 Where Do We Go from Here

The poem would have been immediately familiar to most as a variation on the popular tune “Where Do We Go from Here [Boys],” published in 1917.  That song follows the adventures of Paddy Mack, a cab driver from New York who joins the American Expeditionary Force (you can listen to it here): 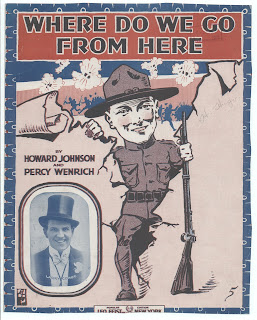 Ollie Parnell’s variation on the tune reminds readers of women’s contributions to the war and the uncertainty they faced in the post-war world.  Historian Lynn Dumenil notes,
During World War I, observers routinely described women workers, especially those who were breaking down barriers that had limited their work opportunities, as the “second line of defense," whose service in the nation’s interest paralleled that of male soldiers.”***
During the war, women workers were needed to fill jobs that had previously been open only to men. They completed the work professionally and competently, whether working in munitions factories, on subways and tram cars, or at agricultural and forestry positions.  After the war, these women “presented themselves as competent individuals who contributed significantly to the winning of the war. They insisted that they had thus earned equal citizenship, a claim that became an important part of the final drive for woman suffrage and the ratification of the Nineteenth Amendment in 1920.”****