Football with the lads

Perhaps the best-known football story of the First World War is that of the men of the London Irish Rifles who dribbled the ball across No Man’s Land under heavy machine gun and artillery fire as they attacked the German lines at Loos in 1915.*

What is less well-known is the plight of soldiers who returned from the war, unable to ever again join in a game of football. An estimated 8 million veterans returned home permanently disabled, 750,000 men in Britain and 1.5 million in Germany.  As historian Deborah Cohen explains, 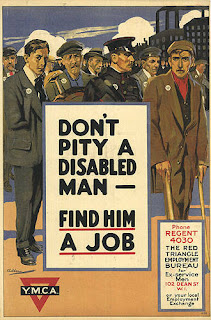 More than any other group, disabled veterans symbolized the First World War’s burdens. Long after the Armistice, the sight of empty sleeves tucked into pockets recalled “sad memories of the war and its longdrawn suffering.” For the disabled themselves, as one veteran explained, the Great War “could never be over.”**
In January of 1920, Punch published a poem by E.W. Pigott that tells of the costs born and the courage displayed by disabled veterans.

Now has the soljer handed in his pack,
And “Peace on earth, goodwill to all” been sung;
I’ve got a pension and my ole job back—
Me, with my right leg gawn and half a lung;
But, Lord! I’d give my bit o’ buckshee° pay

And my gratuity in honest Brads°
To go down to the field nex’ Saturday
And have a game o’ football with the lads.

It’s Saturdays as does it. In the week
It’s not too bad; there’s cinemas and things;
But I gets up against it, so to speak,
When half-day-off comes round again and brings
The smell o’ mud an’ grass an’ sweating men
Back to my mind—there’s no denying it;
There ain’t much comfort tellin’ myself then,
“Thank Gawd, I went toot sweet° an’ did my bit!”

Oh, yes, I knows I’m lucky, more or less;
There’s some pore blokes back there who played the game
Until they heard the whistle go, I guess,
For Time an’ Time eternal. All the same
It makes me proper down at heart and sick
To see the lads go laughing off to play;
I’d sell my bloomin’ soul to have a kick—
But what’s the good of talkin,’ anyway?
—E.W. Pigott***
Over 40,000 British veterans of the First World War suffered the amputation of one or more limbs, while the number of war amputees in Germany totaled over 67,000.†  In the aftermath of the Great War,  the economic plight of disabled veterans was particularly acute as widespread social unrest spread and unemployment rose.

In Britain, pensions for the disabled were limited to no more than 40 shillings per week, a sum far below what was needed to support a man, much less a family (unskilled builders earned 84 shillings/week, coal miners between 99 – 135 shillings/week††). Disability review boards assessed the extent to which men were disabled and awarded the full 40 shillings only to those who were determined to experience 100% disability, defined as follows: 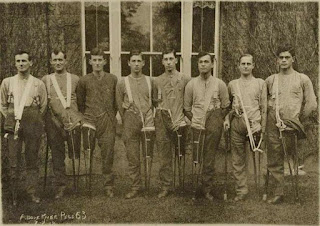 Loss of two or more limbs, loss of an arm and an eye, loss of a leg and an eye, loss of both hands or all fingers and thumbs, loss of both feet, loss of a hand or a foot, total loss of sight, total paralysis, lunacy, wounds or disease resulting in a man being permanently bedridden, wounds to internal organs or head involving total permanent disability, very severe facial disfigurement.
Those with legs amputated at the hip or with a stump of “not more than five inches” were assessed as 80% disabled and received 32 shillings/week, while a veteran with a leg amputated “more than 4 inches below the knee” was determined to be only 50% disabled and entitled to receive a mere 20 shillings per week.†††

As former Sergeant Thomas Kelly of Dumbartsonshire wrote to his government,
There was not so much red-tape to go through in August, 1914, when the country was crying for men and I left a good job to join the soldiers, but now when I am a maimed and not fit for manual labour, this country has no further use for me. Yet it was to be a country fit for heroes to live in.††††

***While it is nearly impossible to determine the author’s identity with certainty, the Imperial War Museum's Lives of the First World War lists a Lieutenant Edward William Pigott, who served with the London and East Lancashire Regiments.
† For Britain, Joanna Bourke’s Dismembering the Male, Univ. of Chicago, 1996, p. 33; for Germany, Robert Weldon Whalen’s Bitter Wounds, Cornell UP, 1984, p. 40.
†† “War and Impairment: The Social Consequences of Disablement,” UNITE and UK Disability History Month, Nov/Dec 2014, https://ukdhm.org/v2/wp-content/uploads/2014/09/UK-Disability-history-month-2014-Broadsheet.pdf, Accessed 20 Jan. 2019.

††† Thanks to Dr. Jessica Meyer who shared these statistics from Joanna Bourne’s Dismembering the Male in a presentation at Voices from the Home Fronts, The National Archives at Kew, 20 Oct. 2018.

Email ThisBlogThis!Share to TwitterShare to FacebookShare to Pinterest
Labels: Pigott

One of the most sensational news stories of January 1919 was the double suicide of twin sisters who had volunteered with the Red Cross as nurses and canteen workers. The women were the wealthy daughters of a New York City businessman, and one of the sisters was a published poet. Following the tragedy, Harriet Monroe of Poetry magazine wrote,
The toll of our heroic soldier dead does not complete the list of those who have given their lives in the cause of liberty…. The self-drowning of the twin sisters Gladys and Dorothea Cromwell should not be called suicide, but the tragic result of over-strain due to months of contact with the dark realities of war…. Thus her fellow-poets of America are entitled to inscribe the name of Gladys Cromwell on their honor-roll, just under those of Alan Seeger, Joyce Kilmer and the other poet-heroes who died in battle.*

The biographical note that appears at the conclusion of Gladys Cromwell’s posthumously published poems relates her story:

“Gladys and Dorothea Cromwell were so essentially one that any account of either must include the other…. They were born in November, 1885, and inherited possessions, talents, and an exquisite beauty strangely poignant because in the twin sisters the charm seemed more than doubled…. They found their home in the unseen. In the outer, material world, they existed only by an effort that cost them much, for they moved as spirits, untouched by crude desires; bending with a shy longing to meet human needs; searching for some solution that should justify their personal immunities, their money, and the grace and luxury to which they had been born.  A delicate humility made them feel debtors to life….
In January, 1918, the two sisters, having enrolled in the Canteen Service of the Red Cross, sailed for France and were stationed at Chalons. For eight months they worked under fire on long day or night shifts; their free time was filled with volunteer outside service; they slept in ‘caves’ or under trees in a field; they suffered from the exhaustion that is so acute to those who have never known physical labour; yet no one suspected until the end came that for many months they had believed their work a failure, and their efforts futile.  The Chalonais called them “The Saints”; during dull evenings, the poilus, who adored the “Twin Angels,” found amusement in effort, always unsuccessful, to distinguish them apart. The workers in the Canteen loved and admired them for their courage—that finest bravery which leads fear to intrepid action; they loved them for their rare charm, but they gave them whole-souled appreciation for the tireless, efficient labor which made them invaluable as practical canteeners.

In September, at their own request, they were transferred to an Evacuation Hospital, for after the rest of a ‘permission,’ they longed to work with ‘our own boys.’ Eight months overwhelming strain and fatigue had made them more weary than they realized, and the horrors of conditions near the Front broke their already overtaxed endurance. In the diaries they left, signs of mental breakdown begin to show as early as October…. but years of self-control and consideration for others made them conceal the black horror in which they lived—the agony through which they saw a world which they felt contained no refuge for beauty and quiet thought.  In such a world they conceived they had no place, and when on their way home, they jumped from the deck of the Lorraine, it was in response to a vision that promised them fulfilment and peace…. ”**

Gladys Cromwell’s poem “The Extra” describes the burden of living in a world wrecked by war. The poem’s title is ambiguous; it may refer to the outsider status of women in war zones, to the ever-present reality of war, or perhaps to a woman estranged from herself after witnessing the horrors of war.

Sheltered and safe we sit.
Our chairs are opposite;
We watch the warm fire burn
In the dark. A log I turn.
Across the covered floor
I hear the quiet hush
Of muffled steps; the brush
Of skirts; — then a closing door.
Close to you and me
The clock ticks quietly.

I know that we exist
Two entities in Time.
Our vital wills resist
Enclosing night; our thoughts
Command a Truth above
All fear, in knowing Love.

Are we awake or dreaming?
On the hearth, the ashes are gleaming.

Listen, dear:
The clock ticks on in the quiet room,
It’s all a joke, a poor one, too.
Or else I’m mad! This can’t be true?
I light the lamp to lift the gloom.
My world’s too good for such a doom.
One fact, if nothing else, I know,
I’ll die sooner than have it so!
—Gladys Cromwell

On the night of January 19, 1919, a sentry on the deck of the Lorraine was the only one who saw the women calmly walk to the ship’s rail, before quickly climbing over and plunging into the water. By the time the Captain of the Lorraine could be notified, the ship had traveled five miles beyond the place the Cromwell sisters were last seen.  Their double suicide provoked widespread public debate concerning the mental effects of war work on women volunteers.  In a New York Times front-page article, Mrs. Edward Shearson, a passenger on the ship from which the sisters jumped, was quoted as saying, “It is my belief that all American women should come home as soon as possible.  Conditions are such that they can be released and all, especially young women, should be brought back.  Their work is finished. They are tired and nervous.”†