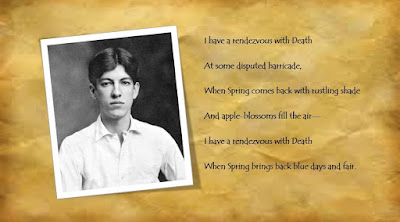 “Of all the poets who have died young, none has died so happily,” said William Archer, describing Alan Seeger in the “Introduction” to Seeger’s posthumously published poems.* Seeger, sometimes called “the American Rupert Brooke,” was an American living in Paris when war broke out in July of 1914. Within weeks, he had volunteered to fight with the French Foreign Legion, and less than two years later, he was killed at the Somme on July 4, 1916 in a French attack on German lines at Belloy-en-Santerre. According to Archer, on the evening of July 4th,

Alan Seeger advanced in the first rush, and his squad was enfiladed by the first of six German machine guns, concealed in a hollow way. Most of them went down, and Alan among them—wounded in several places. But the following waves of attack were more fortunate. As his comrades came up to him, Alan cheered them on; and as they left him behind, they heard him singing a marching-song in English: “Accents of ours were in the fierce mêlée.” They took the village, they drove the invaders out; but for some reason unknown—perhaps a very good one—the battlefield was left unvisited that night. Next morning Alan Seeger lay dead.**


Best-known for his war poem “I Have a Rendezvous with Death,” Seeger wrote extensively about the glory of war and the honor of dying in battle (in this, he can perhaps be more readily compared to the British poet Julian Grenfell). In Seeger’s poem “The Hosts,” he writes,
Friend or foe, it shall matter nought;
This only matters, in fine: we fought.
For we were young and in love or strife
Sought exultation and craved excess:
To sound the wildest debauch in life
We staked our youth and its loveliness.
Let idlers argue the right and wrong
And weigh what merit our causes had.
Putting our faith in being strong—
Above the level of good and bad—
For us, we battled and burned and killed
Because evolving Nature willed,
And it was our pride and boast to be
The instruments of Destiny.

In October of 1914, while halted on march to the front lines, Seeger wrote his mother from outside Reims: “I am feeling fine, in my element, for I have always thirsted for this kind of thing, to be present always where the pulsations are liveliest. Every minute here is worth weeks of ordinary experience.”*** He grew increasingly impatient with American neutrality, and in June of 1915 wrote,“Everybody should take part in this struggle which is to have so decisive an effect, not only on the nations engaged but on all humanity. There should be no neutrals, but everyone should bear some part of the burden…. Death is nothing terrible after all. It may mean something even more wonderful than life. It cannot possibly mean anything worse to the good soldier.”**** In Seeger’s poem “A Message to America,” he was even more direct:

You are virile, combative, stubborn, hard,
But your honour ends with your own back-yard;
Each man intent on his private goal,
You have no feeling for the whole….

Never one to retreat from confrontation or his sense of his duty (Seeger was a founding member of Harvard’s Socialist Club and a friend of journalist John Reed†), Seeger condemned those who refused to fight. In “On Returning to the Front after Leave,” he also celebrates the “intrepid brotherhood” that soldiers share.

Sonnet XI
On Returning to the Front after Leave

Apart sweet women (for whom Heaven be blessed),
Comrades, you cannot think how thin and blue
Look the leftovers of mankind that rest,
Now that the cream has been skimmed off in you.
War has its horrors, but has this of good—
That its sure processes sort out and bind
Brave hearts in one intrepid brotherhood
And leave the shams and imbeciles behind.
Now turn we joyful to the great attacks,
Not only that we face in a fair field
Our valiant foe and all his deadly tools,
But also that we turn disdainful backs
On that poor world we scorn yet die to shield—
That world of cowards, hypocrites, and fools.
—Alan Seeger

William Archer says of the soldier-poet, “But, devoted though he was to his art, he felt that to live greatly is better than to write greatly.”†† Seeger has no known grave.