The World I Knew


The Great War ended on November 11, 1918, but its effects were felt for years to come. Louis Golding, the son of Jewish immigrants from Russia who had settled in Manchester, was rejected from British army service for medical reasons: poor vision, inflamed tonsils, and diseased lungs.* Wanting to contribute in some way, Golding volunteered as a hospital orderly and canteen worker, serving in England, Salonika, and France.*  His first book of poetry, Sorrow of War, was published in 1919 and draws upon his experiences in tending the wounded. 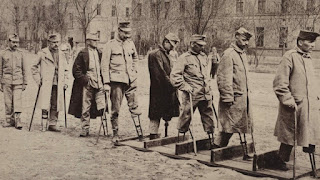 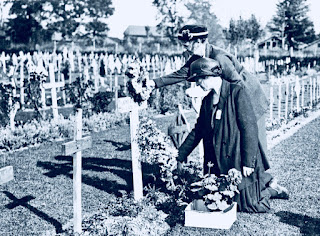 Though Golding’s poem “Broken Bodies” bears witness to his medical work during the war, it also likely draws upon a more personal tragedy: Golding’s younger brother, Jack, a soldier with the 1/7th Manchester Regiment, was killed in one of the last German offensives of the war on April 5, 1918.

In 1940, Golding published his memoir, The World I Knew. In it, he describes the sadness and unease that characterized life after the Armistice:
The war came to an end.  I returned to Oxford, in the autumn of 1919.  It was not, as I had sometimes hoped it might be, a gay season.  There was something a little husky, a little wild in the voices of the autumnal city, as if they told of Death departing from his covenant, of his coming not when the fruit had been gathered, but when the sap rose through the trees.  That year, when the flush of red washed flame-like over the creepers, there were many to whom the colour spoke too vividly of the flush of red that had washed over the green fields of France that did not always remain green.**

Email ThisBlogThis!Share to TwitterShare to FacebookShare to Pinterest
Labels: Golding


Although British Prime Minister David Lloyd George had promised in late November of 1918, just weeks after the Armistice, that his government would work “to make Britain a fit country for heroes to live in,”
By 1921, countless former soldiers, many of them badly disabled, were living in dire poverty, begging on the streets or trying to eke out a living by selling matches and mementoes, eating at food kitchens, sometimes forced to sleep in doorways or on park benches. “We were no longer heroes, we were simply ‘unemployed’ was one former officer’s bitter commentary.”*

British soldier and writer Edward Shanks served with South Lancashire Regiment until he was gassed in 1915 and medically discharged from his unit. He worked in clerical support positions for the rest of the war, publishing several volumes of war poetry.**  However, his poem “Armistice Day, 1921” was not published until 1925.  Perhaps it was too real, too disheartening to print before that time.

The hush begins.  Nothing is heard
Save the arrested taxis throbbing
And here and there an ignorant bird
And here a sentimental woman sobbing.

The statesman bares and bows his head
Before the solemn monument:
His lips, paying duty to the dead
In silence, are more than ever eloquent.

But ere the sacred silence breaks
And taxis hurry on again,
A faint and distant voice awakes,
Speaking the mind of a million absent men:

‘Mourn not for us. Our better luck
At least has given us peace and rest.
We struggled when our moment struck
But now we understand that death knew best.

‘Would we be as our brothers are
Whose barrel-organs charm the town?
Ours was a better dodge by far—
We got our pensions in a lump sum down.

‘We, out of all, have had our pay,
There is no poverty where we lie:
The graveyard has no quarter-day,
The space is narrow but the rent now high.

‘No empty stomach here is found:
Unless some cheated worm complain
You hear no grumbling underground:
Oh, never, never wish us back again!

‘Mourn not for us, but rather we
Will meet upon this solemn day
And in our greater liberty
Keep silent for you, a little while, and pray.’
—Edward Shanks

Shanks’ poem “Remembrance Day” gives the dead a voice: they speak to the despair that many war survivors experienced.  The poem also provides an interesting contrast to one of the most famous poems read on Remembrance Day, Laurence Binyon’s “For the Fallen,” that proclaims, “We will remember them.”

But how are soldiers who survived the Great War remembered?  Fifteen million men from all sides of the conflict received wounds that left them permanently crippled.  In Britain, over 41,000 British soldiers had arms or legs amputated, while 65,000 received disability pensions for mental health problems diagnosed as ‘neurasthenia.’†  Robert Graves, British soldier and war poet, recalls that in the years following the war, “Ex-servicemen were continually coming to the door selling boot-laces and asking for cast-off shirts and socks.”††

Email ThisBlogThis!Share to TwitterShare to FacebookShare to Pinterest
Labels: Shanks


Describing the poetry of Scottish writer Marion Angus, a reviewer wrote, “To read her verse is like sitting in an empty room where fingers tap on the window pane, and outside the house, something passes on noiseless feet.”*

Empty noiselessness: an earlier post on this blog has noted the unnatural quiet that marked the Armistice. All along the battlefront, men described the sudden silence:
The silence is oppressive. It weighs in on one’s eardrums. We have lived and had our being in din …. The air is full of half-forgotten sounds: the rustling of dead leaves, the organ tone of wind in the tree tops, whispers through the underbrush, lazy echoes of voices in the road…. it can’t be true…We cannot comprehend the stillness.**

Silence was experienced by those on the home front as well, but for them, the stillness echoed with absence and extended down through the years.

Some one was singing
Up a twisty stair,
A fragment of a song,
One sweet, spring day,
When twelve o’clock was ringing,
Through the sunny square—

‘He dwells within a far countree,
Where great ones do him courtesie,
They’ve gien him a golden croon,
An’ he’ll come nae mair to oor toon.’—

No one is singing
Up the twisty stair.
Quiet as a sacrament
The November day. 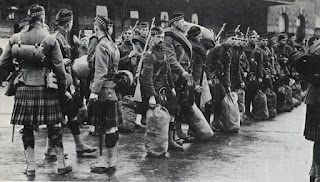 Can’t you hear it swinging,
The little ghostly air?—
Hear it sadly stray
Through the misty square,
In and out a doorway,
Up a twisty stair—
Tartan plaid and buckled shoon,
He’ll come nae mair to oor toon.
—Marion Angus

Reworking the ballad form, Angus contrasts traditional Scottish music before the war with the raw and painful ways in which the old ballads were heard after the tragic losses of the Great War.  An estimated 125,000 Scottish soldiers never returned home.

Angus was known for writing in Scots, but “Remembrance Day” begins in English, then shifts to Scots to sing of a young soldier “baith frank and free” who will come no more to his home town. The poem reverts to English as it describes a bereft voice that sings no more and the sacramental silence that falls on Remembrance Day, before the poem returns to Scots, closing with the ghostly notes of an ancient ballad that now keens for the recent war dead.

Hugh MacDiarmid, a contemporary of Marion Angus and one of the best-known modern Scots writers of the twentieth century, notes, “the Scottish consciousness is divided […] this linguistic division means that Scotsmen feel in one language and think in another, that their emotions turn to the Scottish tongue.”***

Fluent in both Scots and English, Marion Angus worked during the war at the Stobs, a British Army training camp in the Scottish Borders that became an internment camp for civilians and prisoners of war.  By May of 1916, there were over 4,500 prisoners in the camp.†  Her first book of poetry, The Lilt, was published in 1922.  At the time of her death in 1946, Marion Angus was credited as being “one of the most distinctive voices of the modern Scots revival,”†† but her poetry, which focuses almost entirely on women’s experiences, has been largely forgotten.