In October of 1918, in its review of newly published works, The Bookman praised a small volume of poetry titled Lost City, claiming that the work
makes a trilogy with Rupert Brooke and Rose Macaulay. It is a book of Cambridge and the Fen Country and of those who went from Cambridge, that city of youth, never to return.  The poetry has the clear colour, the pure music, the intensity that entitles it to a place in the trilogy.
The author, Kathleen Montgomery (née Coates) Wallace, was a graduate of Girton College, Cambridge. Together with Margaret Postgate (Cole) and three other Girton students, Kathleen Coates had contributed to a small volume of love poetry, Bits of Things, published in the spring of 1914.  In the halcyon days before the Great War, while earning her degree in English, she was joined at Cambridge by her younger brother Basil, who studied medicine at Queens’ College, where their father had served as Bursar and Assistant Tutor before his death in 1912. When war was declared, Kathleen's brother Basil was an early volunteer, joining the 10th Rifle Brigade in 1914.  Sent to France early in the summer of 1915, he was killed by a German sniper within sight of his own lines on 7 September 1915, just days before his 22nd birthday.  His body was never recovered.*

Lost City, divided into “Before” and “After,” mourns the death of her brother and struggles to create a locus for grieving a soldier who has no known grave, as his sister remembers him in the familiar sights of the university town they shared. 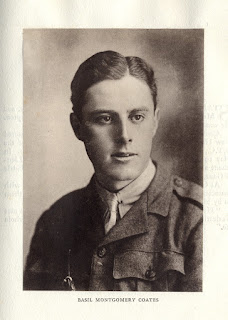 I have come back in a rich hour of May
My heart, to this gray town of yours and mine,
To the grave gardens by the river’s line
Where scents rise softly at the end of day
—Back from hot city pavements worlds away,
Where life flows outwards in a ceaseless line,
Where soul treads hard on soul and makes no sign.
—To the dear smell of lawns, and the branches sway.
Gold of the sky, black boughs, and the rooks call
The evening stillness rises like a tide—
Across the cobbled court I hush my tread;
There is your window, lamplight on your wall,
There is a shadow on the blind inside—
But you are dead, my dear, but you are dead.
—Kathleen Montgomery Wallace

On the home front, life continued, and it is this that tinges all of reality with a sense of the surreal, as described in the final stanzas of another of Wallace’s poems “Unreturning”:

Red leaves above your door,
Gray walls and echoing street
Whose stones will never more
Ring to your passing feet;

Strange! to think Term is here,
Life leads the same old dance,
While you lie dead, my dear,
Somewhere in France…. 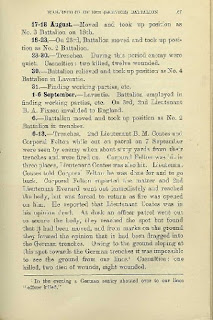 The War Record of 10th (Service) Battalion records the details of Basil Montgomery Coates’ death in its entry for 6th - 13th September 1915:
2nd Lieut. B.M. Coates and Corporal Felton while out on patrol on 7th September were seen by the enemy when about sixty yards from their trenches and were fired upon. Corporal Felton was hit in three places, Lieutenant Coates was also hit. Lieutenant Coates told Corporal Felton he was done for and to go back. Corporal Felton reported the matter and 2nd Lieut. Everard went out immediately and reached the body, but was forced to return as fire was opened on him. He reported that Lieutenant Coates was in his opinion dead. At dusk an Officer patrol went out to secure the body, they reached the spot but found that it had been moved, and from marks on the ground they formed the opinion that it had been dragged into the German trenches. Owing to the ground sloping at this spot towards the German trenches it was impossible to see the ground from our lines. In the evening a German sentry shouted over to our lines “officer killed.”

Coates’ commanding officer, Lieutenant Colonel S. J. Loftus, wrote to Basil’s mother, “Your son was killed yesterday (7 Sept.) while on patrol duty, and unfortunately we were unable to recover his body, which the Germans have taken into their lines, and which they will no doubt give an honourable burial.” Another officer, Lieutenant C. Warren, added, “Coates was one of the bravest men I’ve known. … He had become very keen about day patrolling, which is risky work and had done several good patrols…. It [Coates’ death] was a terrible shock to us all, as we were all immensely fond of him. He was so good-natured and had such a charming manners, and was always cheerful and considerate.”

In January of 1917, the Cambridge Independent Press announced the engagement of Kathleen Montgomery Coates to Major James Hill Wallace, a Canadian officer who was attached to the Canadian Mounted Rifles and who by the war’s end was serving as Chief Supervisor of the Canadian YMCA. The couple were married in February of 1917, and after the Armistice, Kathleen Montgomery Wallace traveled with her husband to Canada and China, raising four sons and writing numerous novels and children’s books, among them, Immortal Wheat: An Imaginative Interpretation of the Lives and Works of the Brontës. 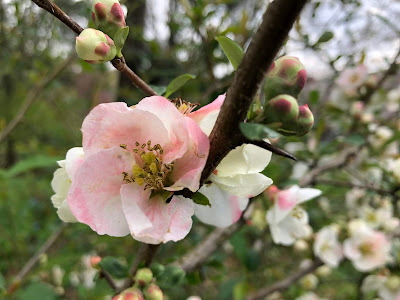 A previous post on this blog shared Sara Teasdale’s “Spring in War-Time,” a poem that ironically juxtaposes spring battle offensives with the regeneration and rebirth most often associated with the season.  In “Spring the Cheat,” British author Winifred Letts contrasts the promise of spring with the devastating losses felt by those on the home front.

The wych-elm shakes its sequins to the ground, 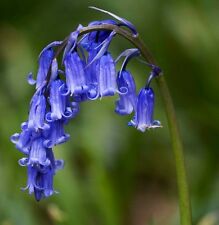 With every wind the chestnut blossoms fall:
Down by the stream the willow-warblers sing,
And in the garden to a merry sound
The mown grass flies.  The fantail pigeons call
And sidle on the roof; a murmuring
Of bees about the woodbine-covered wall,
A child’s sweet chime of laughter – this is spring.

Luminous evenings when the blackbird sways
Upon the rose and tunes his flageolet*,
A sea of bluebells down the woodland ways,--
O exquisite spring, all this—and yet—and yet—
Kinder to me the bleak face of December
Who gives no cheating hopes, but says—“Remember.”
—Winifred Letts

Blossoms fall from trees like sequins, birdsong echoes in woods and streams, bees drowsily buzz their bass note as children’s treble laughter fills the scented air – but all is out-of-tune with the bleak mood of those who mourn. The renewal of the natural world merely underscores what has been lost forever: beloved men who were killed in the Great War.