“To become a conscientious objector in 1916 was a difficult decision, which apparently involved rejecting the whole of conventional British society and everything it stood for.”
—Margaret Brooks, “Conscientious Objectors in Their Own Words”† When Britain instituted mandatory conscription with the Military Service Act of 1916, conscientious objectors were allowed to apply to local tribunals to request exemption from military service.  Yet often those seeking exemption as conscientious objectors “were mocked and vilified by the press and public, were ostracised by friends and family, sacked from jobs, imprisoned and physically brutalised.  To most people, they were seen as shirkers, cowards, and even traitors.”*

Tribunals granted few exemptions: approximately 16,000 men were recorded as conscientious objectors in Britain in the First World War, compared to the six million men who served in the military. The British Imperial War Museum website notes, however, that  “the impact of these men on public opinion and on future governments was to be profound.”†  Over one-third of conscientious objectors were imprisoned at least once;† many were assigned to non-military manual labor work in support of the war effort.

Gerald Shove was a graduate of King’s College at Cambridge, a close friend of the economist John Maynard Keynes, and a life-long pacifist.  He met his future wife, the poet Fredegond Maitland, at a tea party in 1914, where the two spent the evening discussing the war.  The couple became engaged the same week that Rupert Brooke, a Cambridge friend of Shove’s, died on his way to Gallipoli.**

Although Shove likely would have been granted exemption from military service on medical grounds, he applied for conscientious objector status and was assigned to agricultural work. Fredegond writes of that time,

…the war was only then reaching its peak of horror and our life had suddenly grown very strenuous and anxious.  We got out of bed when the alarm-clock said that it was five o’clock, and Gerald uncomplaining set forth across the fields to his new work.  He returned at dusk, but I used, of course, to walk over to the farm with packages of food and I used always to be terrified that he would collapse under the strain of the work (33).**

In her poem “The Farmer, 1917” it seems likely Fredegond Shove took her husband as her inspiration for the “solemn and uncompromising form” of the solitary man in the fields.

I see a farmer walking by himself
In the ploughed field, returning like the day
To his dark nest. The plovers circle round
In the gray sky; the blackbird calls; the thrush
Still sings—but all the rest have gone to sleep.
I see the farmer coming up the field,
Where the new corn is sown, but not yet sprung;
He seems to be the only man alive
And thinking through the twilight of this world.
I know that there is war behind those hills,
And I surmise, but cannot see the dead,
And cannot see the living in their midst—
So awfully and madly knit with death.
I cannot feel, but know that there is war,
And has been now for three eternal years,
Behind the subtle cinctures of those hills.
I see the farmer coming up the field,
And as I look, imagination lifts
The sullen veil of alternating cloud,
And I am stunned by what I see behind
His solemn and uncompromising form:
Wide hosts of men who once could walk like him
In freedom, quite alone with night and day,
Uncounted shapes of living flesh and bone,
Worn dull, quenched dry, gone blind and sick, with war;
And they are him and he is one with them;
They see him as he travels up the field.
O God, how lonely freedom seems to-day!
O single farmer walking through the world,
They bless the seed in you that earth shall reap,
When they, their countless lives, and all their thoughts,
Lie scattered by the storm: when peace shall come
With stillness, and long shivers, after death.
--Fredegond Shove

The poem describes a moment at the close of day when under a gray sky, a farmer returns “to his dark nest” in the twilight of the world.  The hills rise up around him as a cincture, the rope belt worn by priests and associated with spiritual watchfulness and self-mastery.

The careful pattern of repetitions (“I see the farmer”) marks the man as isolated and also mirrors the deliberate decisiveness required of men who identified as conscientious objectors.  While the first nine lines of the poem emphasis the farmer’s alienation – in a world that has seen millions of men march off to war, “he seems to be the only man alive” – the poet’s imagination “lifts the sullen veil of alternating cloud.” Stunningly, what is revealed is the deep connection between the solitary farmer and the “Wide hosts of men…/ Worn dull, quenched dry, gone blind and sick, with war.”

Together, the farmer and the fighters have been “awfully and madly knit with death.” They fight for him; he farms for them so that they can continue to fight. In a war that has dragged on for “three eternal years,” they are linked to one another in their loneliness and in their courage: “they are him and he is one with them.”

The close of the poem looks to a future, perhaps far distant.  If peace comes, it will arrive “With stillness, and long shivers” after the incomprehensible loss of “countless lives, and all their thoughts.” And yet the fighting men bless the farmer for the hope he scatters: in the metaphor of seed lies the promise of birth and future sustenance.

Fredegond Maitland Shove was a niece by marriage of composer Ralph Vaughan Williams (he set four of her poems to music), and she was a cousin of Virginia Woolf (the two were quite close until Shove’s conversion to Catholicism in 1927).  She was also the first female poet included in the Georgian Poetry anthologies, her work selected for the 1918-1918 volume (the poetry of Charlotte Mew, Rose Macaulay, and Edith Sitwell had also been considered).  It has been suggested that if not for her connections and her gender, her poem “The Farmer, 1917” would not have appeared in anthologies of the time.  And yet if understood as a reflection upon conscientious objectors, “The Farmer, 1917” powerfully addresses an aspect of the war that is often forgotten.

It is easy to forget the sheer scale of the Great War. The numbers tell the tale: over 32 million artillery shells were fired during the battle of Verdun; over 3,000 artillery guns were used by the Allies during the Third Battle of Ypres; during the battle of High Wood on August 24, 1916, it is estimated that 10 British machine guns fired over 1 million rounds in 12 hours.  The human toll was also staggering: over 35 million were killed or wounded, and on average, 230 soldiers died each hour of every day during a conflict that lasted over four years.*

Men were dwarfed by the scale of a war such as the world had never seen before. Gilbert Frankau’s poem “Ammunition Column” considers one man’s place in a modern, industrial war.

I am only a cog in a giant machine, a link of an endless chain:
And the rounds are drawn, and the rounds are fired, and the empties return again;
Railroad, lorry, and limber; battery, column, and park;
To the shelf where the set fuse waits the breech, from the quay where the shells embark.
We have watered and fed, and eaten our beef; the long dull day drags by.
As I sit here watching our “Archibalds”** strafing an empty sky;
Puff and flash on the far-off blue round the speck one guesses the plane—
Smoke and spark of the gun-machine that is fed by the endless chain.

I am only a cog in a giant machine, a little link of the chain,
Waiting a word from the wagon-lines that the guns are hungry again:—
Column-wagon to battery-wagon, and battery-wagon to gun;
To the loader kneeling 'twixt trail and wheel from the shops where the steam-lathes run.
There's a lone mule braying against the line where the mud cakes fetlock-deep'
There's a lone soul humming a hint of a song in the barn where the drivers sleep;
And I hear the pash of the orderly's horse as he canters him down the lane—
Another cog in the gun-machine, a link in the self-same chain.

I am only a cog in a giant machine, but a vital link of the chain;
And the Captain has sent from the wagon-line to fill his wagons again:—
From wagon-limber to gunpit dump; from loader's forearm at breech,
To the working-party that melts away when the shrapnel bullets screech.
So the restless section pulls out once more, in column of route from the right,
At the tail of a blood-red afternoon; so the flux of another night
Bears back the wagons we fill at dawn to the sleeping column again . . .
Cog on cog in the gun-machine, link on link in the chain!

In Frankau’s poem, the war has taken on a monstrous life of its own: the guns are insatiably hungry and must be fed. The poem’s regular meter sounds like a drumbeat, signaling the inevitability of the conflict’s relentless advance. 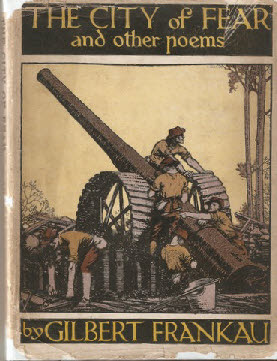 Men are reduced to machine parts as they work to satisfy the appetite of the war and its endless demand for ammunition. Everything and everyone appears small and subservient to the Great War.  The mule, the horse, the lone soul humming song: all are merely links and cogs in the chain of mechanized killing.  The grim irony is that in stoking the engines of war and prolonging its life, the men ensure that the killing will continue.  War feeds on human lives.

Gilbert Frankau joined the British Army shortly after the war began in 1914 and was transferred to the Royal Field artillery in early 1915.  He fought at Loos, Ypres, and the Somme, but left the army “on account of ill-health contracted on active service” in February of 1918.†