The last of wars 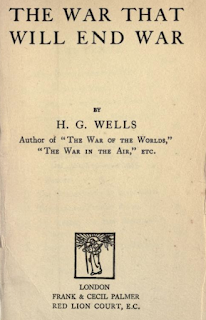 One of the most common catchphrases of the First World War was that it promised to be “the war to end war.”  H.G. Wells had written a series of essays at the war’s outbreak; these were published in book form in October 1914 and titled The War That Will End War.  Wells wrote,

For this now is a war for peace. It aims straight at disarmament. It aims at a settlement that shall stop this sort of thing for ever. Every soldier who fights against Germany now is a crusader against war. This, the greatest of all wars, is not just another war—it is the last war!* Just one year later, a poem written by a British lieutenant with the Essex Regiment questioned such optimism.

Coming in splendour thro’ the golden gate
Of all the days, swift passing, one by one,
Oh, silent planet, thou hast gazed upon
How many harvestings, dispassionate?
Across the many-furrowed fields of Fate,
Wrapt in the mantle of oblivion,
The old, grey, wrinkled Husbandman has gone,
Sowing and reaping, lone and desolate—
The blare of trumpets, rattle of the drum,
Disturb him not at all—He sees,
Between the hedges of the centuries,
A thousand phantom armies go and come,
While Reason whispers as each marches past,
“This is the last of wars,—this is the last!”
—Gilbert Waterhouse

The splendid “golden gate” of both sunrise and sunset marks the swift passage of time, while the earth sits in mute witness to the repeated harvests of war: bodies that lie strewn in “the many-furrowed fields of Fate.” Amidst the scene, an ancient and solitary Husbandman – the medieval term given to a farmer who cultivates the land – continues to reap and to sow, appearing deaf to the sounds of battle. While the figure may represent Fate or Death, it is a more likely reference to God, as Christ says in John 15:1, “I am the true vine, and my father is the husbandman” (KJV).  The husbandman sees nothing new, for He has watched thousands of ghostly armies march to their deaths.  Only Reason appears shocked, for to the rational mind, it is inconceivable that war continues to yield its macabre harvests.

The sonnet offers an interesting comparison to Sara Teasdale’s “There Will Come Soft Rains,” published in 1918.  In both poems, the natural world is an indifferent bystander to the killing fields of battle. As Teasdale’s poem concludes,

Not one would mind, neither bird nor tree
If mankind perished utterly;

And Spring herself, when she woke at dawn,
Would scarcely know that we were gone.

Gilbert Waterhouse was mortally wounded on the first day of the Battle of the Somme, July 1st, 1916 (his poem “Bivouacs” was previously shared on this blog). In one of his last poems, “To England,” he had written, “Mayhap my body shall lie bare/ And stark between the trenchéd lines.” Waterhouse was listed as wounded and missing until March of 1917.  His body wasn’t discovered until the summer of 1917 after Germans withdrew from Serre; he is buried at Serre Road Cemetery No. 2.
-------------------------------------------------------
* H.G. Wells, The War That Will End War, Frank & Cecil Palmer, 1914, p. 11. Although the phrase is often attributed to American president Woodrow Wilson, the Oxford Handbook of Propaganda Studies (2013) notes that Wilson biographer John Milton Cooper Jr. "casts doubts on whether whether Wilson ever actually uttered the phrase" (318, fn. 5).
** The poem first appeared in the English Review in October of 1915 and was titled “Sonnet”; it appears in Waterhouse’s posthumously published Rail-head and Other Poems (1916) as “IV” under the heading “Four Sonnets,” and was reprinted in American anthologies, newspapers, and trade journals (including The New England Journal of Medicine and Brooms, Brushes & Handles) as “This Is the Last of Wars.”
Posted by Connie R. at 3:08 PM No comments:

Email ThisBlogThis!Share to TwitterShare to FacebookShare to Pinterest
Labels: Waterhouse

Geoffrey Studdert Kennedy is one of the best-known British chaplains of the First World War; his war-time nickname “Woodbine Willie” was gained from his practice of offering cigarettes to wounded and dying soldiers as he attended to their physical and spiritual needs. He was awarded the Military Cross for conspicuous gallantry in 1917, when during an attack at Messines Ridge, he risked his life to cross a heavily shelled area to procure morphine for the wounded and to care for and retrieve injured soldiers from No Man’s Land.  In his 1919 collection of essays, The Hardest Part, he wrote,
The cutting of the world in two by the sword has helped me to see it whole.  Men’s minds are of necessity less parochial, less insular, and more cosmopolitan, in the best sense, than they were. As a consequence of this there is a quickened interest in ultimate questions, a desire to know the meaning of it all.*

Although an enthusiastic supporter of the war at its onset, its experiences changed him, and after the war ended, he became a vocal pacifist. His first collection of poems, Rough Rhymes of a Padre (1918), was dedicated “To the Officers and Men of the 46th and 24th Infantry Divisions living here and beyond the veil… by one who is proud to have been their comrade.” One of the shortest poems in the collection is titled “War.”

There’s a soul in the Eternal,
Standing stiff before the King.
There's a little English maiden
﻿            Sorrowing.
There's a proud and tearless woman,
Seeing pictures in the fire.
There's a broken battered body
﻿            On the wire.
—G.A. Studdert Kennedy

The poem simply describes four victims of war. The first is a soldier who has risen from the dead, but whose stiff posture, even in heaven, recalls his body’s rigor mortis and the military discipline that was demanded of him in life. The final snapshot is that of a dead man suspended on barbed wire in No Man’s Land; the adjectives “broken and battered” link his sufferings with those of Christ.

The two middle images are those of women on the home front who grieve the dead, each in her own way. One is an idealized English sweetheart, the other a woman who seems almost heartless in her pose of detachment. By including both women, the poem suggests there is no single way to mourn and that outward appearances may be misleading.

In its structure and imagery, the poem also connects the brokenness of the soldiers with the emotional devastation of the home front. The sorrowing maiden is linked with the battered body of the dead soldier in the poem’s only two indented lines (“Sorrowing” and “On the wire”), while the resurrected soldier and the “proud and tearless woman” are alike in their stoic restraint.

At the time of the First World War, poems were a common feature of everyday life, and poetry was deeply connected to politics and current events. War poetry provided a key way of commenting on the war, and numerous poems explicitly referenced others, debating the meaning and purpose of the conflict. In early drafts, Wilfred Owen dedicated his most famous poem “Dulce et Decorum Est” to Jessie Pope, responding to and criticizing her view of the war (perhaps specifically addressing her poem “The Lads of the Maple Leaf”).*

The following two American poems debate not only the war, but ways of understanding the death of war poets. The first poem, written by Walter Adolphe Roberts, appeared in his collection Pierrot Wounded: And Other Poems (1919) and was reprinted in William Stanley Braithwaite’s Anthology of Magazine Verse for 1919. Prior to the U.S. involvement in the war, Roberts was the European war correspondent for the Brooklyn Daily Eagle.

For Poets Slain in War

Happy the poets who fell in magnificent ways!
Gayly they went in the pride of their blossoming days,
Each with his vision of Liberty, chanting its praise.

Seeger and Ledwidge and Pearse and Brooke and Péguy — **
Names that are songs in the saying, that surely shall be
Laurelled among the immortals, for all men to see.

Lo, they were darlings of destiny! Weakly we shed
Even one tear that they lie at the barricades red.
Splendidly dead for the Patria, splendidly dead!
—Walter Adolphe Roberts

Marion Doyle’s response appeared in Selected Poems for Armistice Day (1928).  Doyle’s first collection of poetry, Strange Exodus, was published in 1934; prior to that, her work frequently appeared in magazines and newspapers.

Spendidly Dead
(After reading “For Poets Slain in War”)

“Splendidly dead,” who dares such maudlin singing!
Seeger, Kilmer, Pearse, Brooke, and Péguy—***
Men who would today be gladly bringing
Daring gifts of song to tired humanity,
Sacrificed to Power’s lust for power,
Masked beneath the lie: “For Home and Honor.”
“Splendidly dead”—the pride of manhood’s flower
Crucified upon the cross of horror?

Face the truth: what need now to dissemble?
Mars and Kings have silenced all their singing;
They are dust and yet we start and tremble
At the white dove’s perilous slow winging….