I know the truth


Regarded as one of the finest Russian poets of the twentieth century, Marina Tsvetaeva was a witness to war and revolution.  Born in Moscow in 1892, her father was a professor of Fine Art at the University of Moscow, and her mother was a concert pianist, with strong family ties to Germany and Poland. Her mother wished Marina to become a concert pianist and disparaged her daughter’s writing.  In later life, Tsvetaeva was to write, “With a mother like her, I had only one choice: to become a poet.”

Before her marriage in 1912, Tsvetaeva traveled extensively in Europe, attending school in Switzerland and studying literature at the Sorbonne. When Russia declared war on Germany in 1914, her husband volunteered for the Russian army; she adopted a pacifist stance.  Tsvetaeva composed “defiantly pro-German poems [that] she wrote and read in public during World War I,” and in her essay “On Germany,” written shortly after the war, she wrote, “Politics is a self-evident abomination from which nothing but further abominations should be expected. The very idea of trying to bring ethics into politics!”*

I know the truth! Renounce all others!
There’s no need for anyone to fight.
For what? – Poets, generals, lovers?
Look: it’s evening, look: almost night.
Ah, the wind drops, earth is wet with dew,
Ah, the snow will freeze the stars that move.
And soon, under the earth, we’ll sleep too,
Who never would let each other sleep above.
3rd October, 1915
—Marina Tsvetaeva, translated by A.S. Kline

Russian soldiers suffered greatly due to a severe shortage of weapons and munitions. Lacking artillery shells, machine guns, and rifles, they had little choice but to carry out what became known as the Great Retreat in September of 1915. Tsvetaeva’s poem is a desperate cry for peace, made with the certain knowledge that the war will continue.  As surely as night will fall, snow will fall, and men will continue to fall by the hundreds of thousands. There will be no end to the killing until death claims more victims than can be counted.  Scholar Catherine Ciepiela writes, Tsvetaeva “asks too much; her demands are embarrassing and improper; she ‘makes one feel guilty’ as one critic has phrased it…. She speaks, that is, as all human subjects would like to speak but dare not.”**

Our dead are coming home again 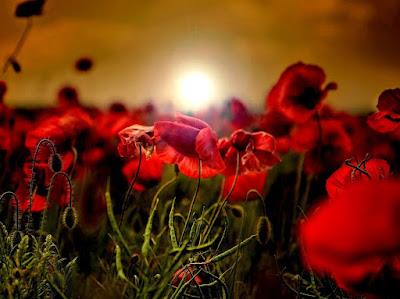 “Every visible and invisible creature is a theophany, or appearance of God,” Evelyn Underhill wrote, quoting John Scotus Erigena in the introduction to her 1916 book of poetry, Theophanies.

Our dead are coming home again:
Softly they come, on silent feet.
Even as with joy we gave our men,
So their return is sweet.

Together they went forth.  Now one by one
They slip into the ancient place;
And we, that thought ourselves alone,
Glimpse the remembered face—

Meet in the shattered homestead of the heart
The old familiar touch, the faithful ways,
The dear known hands, that still possess the art
To mend our broken days.
—Evelyn Underhill

Evelyn Underhill was an established writer when war was declared, the author of Mysticism (1911) and The Path of Eternal Wisdom (1912). But Underhill’s spiritual understanding was deeply shaken by the First World War.  In a letter written in 1921 she confessed it was a time during which she “went to pieces.”* In the years that followed, Underhill became increasingly committed to pacifism. Shortly before her death in 1941, she wrote a friend, “Christianity and war are incompatible, and… nothing worth having can be achieved by “casting out Satan by Satan.”**  She acknowledged in another letter that year, “Not everyone can face the results of an air raid with an unshaken belief in the lovingkindness of God…. But all these various obstacles and difficulties are simply part of the circumstances in which God requires us to serve.”***
----------------------------------------------------------------------
* Evelyn Underhill, letter to Friedrich von Hügel, 21 Dec. 1921, qtd. in Fragments from an Inner Life, p. 108.
** Robert Gail Woods, “The Future We Shan’t See: Evelyn Underhill’s Pacifism,” Religion Online, https://www.religion-online.org/article/the-future-we-shant-see-evelyn-underhills-pacificism/.
*** Evelyn Underhill, Fruits of the Spirit, letter for Eastertide, 1941, quoted in The Soul’s Delight, Upper Room, 1999, p 67.
Posted by Connie R. at 10:51 AM No comments: