How does one make sense of the death of a friend in war?  Frances Cornford shaped her pain into poetry. Cornford was the granddaughter of Charles Darwin and had written poems from a young age.  She was twenty-eight when war broke out in August of 1914 and twenty-nine when she received news of the death of her friend Ferenc Békássy.

A Hungarian scholar and poet who had entered Cambridge in 1911, Békássy left England and his Cambridge friends to join the Austro-Hungarian army soon after war was declared. In a letter dated May 1915, shortly before riding to the Eastern Front, Békássy wrote, “Do you know I think there’s a difference between poets (who write poetry) and other people, that poets take hold of the feelings they have and won’t let go; and other people let feelings have their natural effects and so don’t write poems.”*

We, who must grow old and staid, 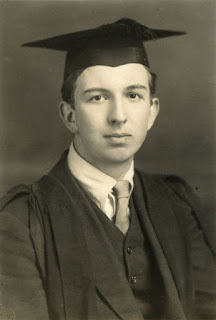 Full of wisdom, much afraid,
In our hearts like flowers keep
Love for you until we sleep.

You the brave, and you the young
You of a thousand songs unsung,
Burning brain, and ardent word,
You the lovely and absurd.

Say, on that Galician plain,
Are you arguing again?
Does a trench or ruined tree
Hear your – ‘O, I don’t agree!’

We, who must grow staid and old,
Full of caution, worn and cold,
In our hearts, like flowers keep
Your image, till we also sleep. 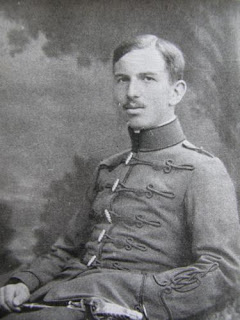 In the introduction to Cornford’s Selected Poems, Jane Dowson notes that readers may miss the depths of Cornford’s poetry as they “take the simplicity at face value and miss the undertow,” for nearly all of Cornford’s work is infused with a “sense of the impermanence of all human relationships” (xv-xvi). This poem is simple in its communication of loss and waste, the “thousand songs unsung,” but it touches upon more complex emotions in refusing to idolize the dead. It offers a gentle mockery of Békássy's incautious and ardent intensity and his penchant for philosophical argument. These were the lovely absurdities that made him a dear friend; he is remembered as a man and not as an idealized warrior.

In May of 1915, Békássy wrote what would be his last letter to Noel Olivier, a young woman he had courted: “I am going to the front in five days’ time, and am already feeling quite detached from everything so that nothing interests me very much and the only vivid remembrances are: people.... I’m going gladly, I know it’s very worth taking the risk, and I am sure to get something good out of the war unless I die in it. It’s part of “the good life” just now, that I should go: and the sooner one gives up the idea that the world can be made better than it is, the better. I daresay one can make it happier, but then happiness isn’t the main point, is it?”*

Békássy was killed in action four days after arriving at the Eastern Front on June 22, 1915.  His war poem “1914” can be read on an earlier post on this blog.


* Letter excerpted from George Gömöri’s “Ferenc Békássy, Rupert Brooke, and Noel Olivier,” The Hungarian Quarterly, vol. 199, pp. 105-113.
**Originally published in Different Days (1928), the poem was slightly revised, and the version shared in this post is from Cornford’s Collected Poems (1954).

On an August day in 1914, Edward Thomas and Robert Frost “were sitting on an orchard stile near Little Iddens, Frost's cottage in Gloucestershire…when word arrived that Britain had declared war on Germany. The two men wondered idly whether they might be able to hear the guns from their corner of the county.”*

Frost would later describe Edward Thomas as “the only brother I ever had.” The First World War separated the two poets: Frost returned to America, and in 1915 Thomas enlisted in the British Army, but the two men frequently exchanged letters.  In December of 1916, Frost sent Thomas a letter about talk of the war in the United States: “Silly fools are full of peace talk over here…. It's none of my business what you do: but neither is it any of theirs. I wrote some lines I've copied on the other side of this about the way I am struck. When I get to writing in this vein you may know I am sick or sad or something.” Frost enclosed this poem with the letter:

Suggested by Talk of Peace at This Time

France, France I know not what is in my heart.
But God forbid that I should be more brave
As a watcher for a quiet place apart
Than you are fighting in an open grave.

I will not ask more of you than you ask,
O Bravest, of yourself. But shall I less?
You know the extent of your appointed task,
Whether you still can face its bloodiness.

Not mine to say you shall not think of peace.
Not mine, not mine. I almost know your pain.
But I will not believe that you will cease
I will not bid you cease, from being slain.

And slaying till what might have been distorted
Is saved to be the Truth and Hell is thwarted.

Shortly before being posted to the Western Front, Edward Thomas replied to Frost in a letter dated 31 December 1916:**

My dear Robert,
I had your letter & your poem ‘France, France’ yesterday.
I like the poem very much, because it betrays exactly what you would say & what you feel about saying that much. It expresses just those hesitations you or I would have at asking others to act as we think it is their cue to act. Well, I am soon going to know more about it.

In previous letters to Edward Thomas, Frost had written,“You know I haven't tried to be troubled by the war. But I believe it is half of what's ailed me ever since August 1914,” and “You rather shut me up by enlisting….Talk is almost too cheap when all your friends are facing bullets.”†

Frost’s poem expresses his own ambivalence toward the Great War as well as the uncertainty many Americans felt towards the conflict.  Frost is deeply worried for his soldier-friend Edward Thomas, who prepares for “fighting in an open grave” while Frost watches in safety “from a quiet place apart.” The repeated refrain “Not mine, not mine” speaks not only of Frost's surrendering his  right to comment on a war that the US had not yet entered, but also of Frost's respect for Thomas’s decision to enlist and even for Thomas’s willingness to die in battle. It is a very hard thing to concede that our loved ones have the right to sacrifice their lives that are so very precious to us.

Edward Thomas was killed on Easter Monday, 9 April 1917.  In his letter of sympathy to Helen, Thomas’s widow, Frost wrote,

“I have heard Edward doubt if he was as brave as the bravest. But who was ever so completely himself right up to the verge of destruction, so sure of his thought, so sure of his word? He was the bravest and best and dearest man you and I have ever known….
Of the three ways out of here, by death where there is no choice, by death where there is a noble choice, and by death where there is a choice not so noble, he found the greatest way.  There is no regret—nothing that I will call regret. Only I can’t help wishing he could have saved his life without so wholly losing it and come back from France not too much hurt to enjoy our pride in him.  I want to see him to tell him something.  I want to tell him, what I think he liked to hear from me, that he was a poet….”††

Song of the Air, Part II

In her lifetime, Jessie Pope was one of the most popular writers of humorist verse in England.  As a recent article from the BBC News Magazine  indicates, however, she has since become “the war poet students love to hate….She is the villain of the war.” In British schools, Pope’s poem “Who’s for the Game?” is widely studied and derided for its jingoist views as it is contrasted with Wilfred Owen’s poem “Dulce et Decorum Est” (in an early draft, Owen dedicated his poem “to Jessie Pope, etc.”).

Not all of Pope’s poems, however, are blind to the darker side of war.  In her poem describing a German airplane (“To a Taube”), she notes the beauty of the plane as well as its destructive power.  Pope acknowledges that modern technologies can be shaped for terrible ends; man has fine-tuned the art of slaughter, and people can now be killed from a distance with cool detachment.

Above the valley, rich and fair,
On flashing pinions, glittering, gay,
You hover in the upper air,
A bird of prey.

Snarling across the empty blue
You curve and skim, you dip and soar,
A dove in flight and shape and hue –
The dove of war.

Above the soldier and the slain,
An armoured bird, you hang on high,
Directed by a human brain,
A human eye.

A thirsty hunter out for blood –
Drinking adventure to the dregs –
Where hidden camps the country stud
You drop your eggs.

Thus, man, who reasons and invents,
Has inconsistently designed
The conquest of the elements
To kill his kind.
– Jessie Pope

Like Alchin in his poem “Song of the Plane,” Pope also celebrates the new and astonishing miracle of flight: the German Taube (the word is translated as dove in English) glitters as it glides above the earth, and light reflects off its wings.  Yet there is a sinister double identity to the Taube: the soaring dove is also a bird of prey, a “thirsty hunter out for blood.” With ruthless precision, the plane discovers hidden camps upon which to drop its bombs, deadly eggs that hatch not life but death and destruction.  During the First World War, German airplanes dropped over 120 tons of explosives on England*; it is estimated that British pilots dropped over 600 tons of explosives on Germany.**

The plane snarls, dips, and soars in a world far removed from the bloody carnage it has caused below.  But Pope’s poem does not hold the machine to blame: the plane is directed by a human brain and human eye.  Humans have invented the plane to subdue the heavens and to kill their own kind. The aeroplane just one of the many inventions of mass destruction developed or refined for slaughter during the Great War (others include armored tanks, modern hand grenades, machine guns, and poison gas).

Although Pope is remembered for her nationalistic war writing, this poem seems to condemn not just the Germans, but humans on all sides who create only to kill.

See Song of the Air, Part I