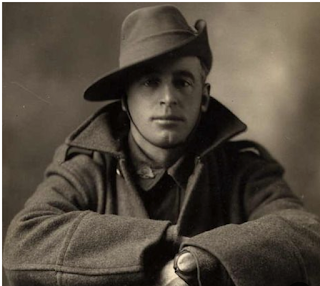 In December of 1915, in the midst of supervising troop withdrawals from the failed Gallipoli campaign, General W.R. Birdwood, Commander of the Australian and New Zealand Army Corps, penned an introduction to the ANZAC Book, a collection of writings, cartoons, and sketches contributed by the ANZAC men who had fought at Gallipoli. The General expressed his opinion that the material in the book “does as much credit to them as the fighting here has done to the Force,” but added that “those who are more critical [of the literary offering] will perhaps remember the circumstances under which the contributions have been prepared, in small dug-outs, with shells and bullets frequently whistling overhead.”  He concluded,
No words of mine could ever convey to readers at their firesides in Australia, New Zealand and the Old Country, one-half of what all their boys have been through, nor is my poor pen capable of telling them of the never-failing courage, determination and cheerfulness of those who have so willingly fought and given their lives for their King and country’s sake.* 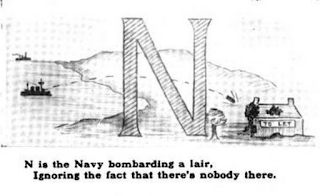 As happened often in the First World War, one way in which men coped with the psychological traumas of war was through humour. The Gallipoli soldiers’ 1915/1916 anthology offered two “ANZAC Alphabets” (“N is the Navy bombarding a lair,/ Ignoring the fact that there’s nobody there”) as well as a short story that recounted the tale of a Sergeant Major who faints dead away when he learns his supply officer has been writing poetry.  And in addition to patriotic and nostalgic verse that recalled scenes of home, the book included “Anzac Limericks”: 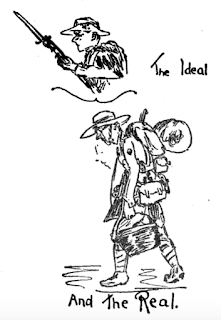 There’s a certain darned nuisance called “Beachy,”**
Whose shells are exceedingly screechy;
But we’re keeping the score,
And we’re after your gore—
So look out, “Beachy Bill,” when we meet ye.

They’ve given us all respirators,
And we’ve bundles of ancient Spectators;***
But we’d give up the two
For a good oyster stew,
Or a dixie of chipped pertaters.
-- C.D. Mc.