An Anthology of Lost Voices 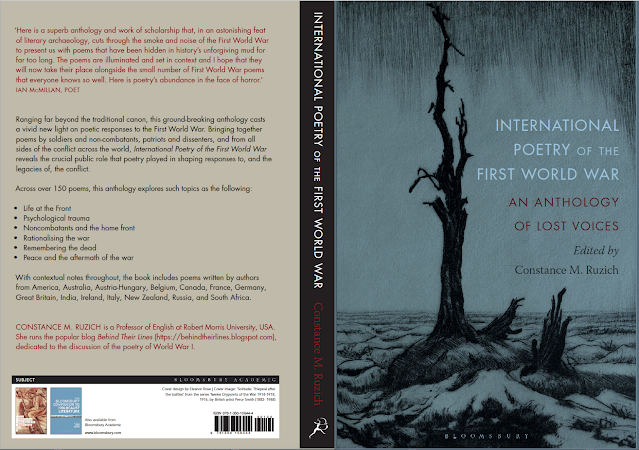 It’s not coincidental that one of my favorite words is serendipity, “the faculty or phenomenon of finding valuable or agreeable things not sought for.” The journey of writing, editing, and publishing International Poetry of the First World War: An Anthology of Lost Voices has been a circuitous one along twisting roads and unmarked paths, and I am grateful to everyone who has provided direction and sustenance along the way. This book would not have been possible if not for the support of so many who contributed to the surprising discoveries that are at the heart of the anthology.
The kindness of strangers was one of the best of these discoveries, such as the generous review provided by the poet Ian McMillan:

Here is a superb anthology and work of scholarship that, in an astonishing feat of literary archaeology, cuts through the smoke and noise of the First World War to present us with poems that have been hidden in history's unforgiving mud for far too long. The poems are illuminated and set in context, and I hope that they will now take their place alongside the small number of First World War poems that everyone knows so well. Here is poetry’s abundance in the face of horror.

What McMillan describes as “literary archaeology” often felt more like happy mudlarking as I searched the foreshore of archives and second-hand bookshops with an eye to spotting poems that were lost, discarded, or forgotten. Some of the finds are rather ordinary, perhaps even common, yet they tell rich stories about the past. Others are true treasures, but it is the search and excavation that have offered such delight. This project’s work has been a happy adventure, and it is my hope that readers will encounter the same pleasures of serendipitous discovery, finding valuable and agreeable voices, histories, and poems in this collection.
International Poetry of the First World War: An Anthology of Lost Voices is published by Bloomsbury Academic Press. It can be ordered online at www.bloomsbury.com at a 35% savings by entering the discount code GLR TW5 on the first page at checkout.
Posted by Connie R. at 11:02 PM No comments:

In her autobiography Grey Ghosts and Voices, May Wedderburn Cannan writes,

The Census for 1921 had found there was in the country a surplus of women who, inconsiderately, had not died in the war, and now there was an outcry and someone christened them “The Surplus Two Million.” The Times suggested that they might seek work abroad; the unemployment figures were swollen with these unnecessary and unwanted persons.*

What was it like for women in the war’s aftermath? During the war, May Wedderburn Cannan had worked in a French railway canteen for British soldiers and in the Paris office of British intelligence. Her fiancé, Bevil Quiller-Couch, survived some of the fiercest fighting on the Western Front, only to die of influenza in February of 1919, while still on active duty in Germany (further details can be read here).

At the war’s end, surviving soldiers who were demobilised returned as different men to homes that had changed dramatically from those they had left. But women, too, struggled to return “back to the empty world.”
Women Demobilized
July 1919
Now must we go again back to the world
Full of grey ghosts and voices of men dying,
And in the rain the sounding of Last Posts
And Lovers’ crying—
Back to the old, back to the empty world.

Now are put by the bugles and the drums,
And the worn spurs, and the great swords they     carried,
Now are we made most lonely, proudly, theirs,
The men we married:
Under the dome the long roll of the drums.
Now are the Fallen happy and sleep sound,
Now in the end, to us is come the paying,
These who return will find the love they spend,
But we are praying
Love of our Lovers fallen who sleep sound.
Now in our hearts abides always our war,
Time brings, to us, no day for our forgetting,
Never for us is folded War away,
Dawn or sun setting,
Now in our hearts abides always our war.
—May Wedderburn Cannan

Cannan includes the first stanza of this poem in her autobiography, prefacing it with the explanation, “Losing one’s world, one still wanders in it, a ghost. It is for long, more real than the new world into which one knows (but does not want to know) one must presently move and live.”**

She attempted to forget her grief in work, but found it difficult to secure a position. In one job interview, she was asked, “And at which University, Miss Cannan, did you get your degree?”

I said I had hoped I had made it clear in my application that I had no Degree and the voice said coldly “the other ten candidates have all got Degrees.”
I thought, “Well, I’ve lost it,” and I thought “surplus two million”: and I collected my bag and my gloves and I looked at them all sitting round that long table and I said, “If I had got a Degree, it would have been between 1914 and 1918 and I preferred to be elsewhere. And what is more, Gentlemen” —I had got up now and pushed back my chair and made them a little bow— “I still prefer to have been elsewhere.”
There was a horrid silence and then someone said loudly, “God bless my soul, the young lady’s quite right.”***

Cannan got the job. Describing her life at that time she writes, “I slept badly, woke dead tired, went early to work, and in the evenings, pulled the green shaded lamp down over my work and was happy to be alone.”†

Although Cannan suffered immense grief, she did not despair, writing, “I was fortunate because though I had lost everything, I kept so much. I did not believe that the Dead had died for nothing, nor that we should have ‘kept out of the war’ —the Dead had kept faith, and so if we did not grudge it, had we.”†† 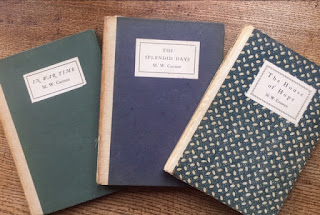