In the fall of 1916, a soldier from the Western Front returned to England on leave and recounted an unsettling experience:

Towards the end of September, I stayed in Kent with a recently wounded First Battalion friend. An elder brother had been killed in the Dardanelles, and their mother kept the bedroom exactly as he had left it, with the sheets aired, the linen always freshly laundered, flowers and cigarettes by the bedside. She went around with a vague, bright religious look on her face. The first night I spent there, my friend and I sat up talking about the war until past twelve o’clock. His mother had gone to bed early, after urging us not to get too tired. The talk had excited me, and though I managed to fall asleep an hour later, I was continually awakened by sudden rapping noises, which I tried to disregard but which grew louder and louder. They seemed to come from everywhere. Soon sleep left me and I lay in a cold sweat. At nearly three o’clock, I heard a diabolic yell and a succession of laughing, sobbing shrieks that sent me flying to the door. In the passage I collided with the mother who, to my surprise, was fully dressed. ‘It’s nothing,’ she said. ‘One of the maids had hysterics. I’m so sorry you have been disturbed.’ So I went back to bed, but could not sleep again, though the noises had stopped. In the morning I told my friend: ‘I’m leaving this place. It’s worse than France.’ There were thousands of  mothers like her, getting in touch with their dead sons by various spiritualistic means.[i]

The First World War saw a dramatic surge in spiritualism, and in their desperate wish to communicate with the dead, many of the grieving turned to Ouija boards, mediums, and séances.[ii]  It’s no surprise then that many poems of the First World War are also peopled with ghosts.

Will you come back to us, men of our hearts, tonight
In the misty close of the brief October day?
Will you leave the alien graves where you sleep and steal away
To see the gables and eaves of home grow dark in the evening light?

"O men of the manor and moated hall and farm,
Come back to-night, treading softly over the grass;
The dew of the autumn dusk will not betray where you pass;
The watchful dog may stir in his sleep but he'll raise no hoarse alarm.

Then you will stand, not strangers, but wishful to look
At the kindly lamplight shed from the open door,
And the fire-lit casement where one, having wept you sore,
Sits dreaming alone with her sorrow, not heeding her open book.

Forgotten awhile the weary trenches, the dome
Of pitiless Eastern sky, in this quiet hour
When no sound breaks the hush but the chimes from the old church tower,
And the river's song at the weir, -- ah! then we will welcome you home.

You will come back to us just as the robin sings
Nunc Dimittis from the larch to a sun late set
In purple woodlands; when caught like silver fish in a net
The stars gleam out through the orchard boughs and the church owl flaps his wings.

We have no fear of you, silent shadows, who tread
The leaf-bestrewn paths, the dew-wet lawns. Draw near
To the glowing fire, the empty chair, we shall not fear,
Being but ghosts for the lack of you, ghosts of our well-beloved dead.
--Winifred M Letts 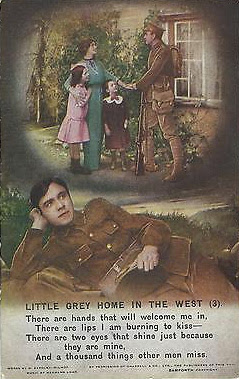 In Letts’ poem, the silent shadows of the men who have died appear not as frightening ghosts, nor as strangers, but as “men of our hearts” who have returned to the places they have loved. The quiet spirits who come “treading softly” are tenderly welcomed.  They are urged to come out of the darkness and into the “kindly lamplight” of home where they may find shelter and solace under familiar gables and eaves.  The beloved ghosts are invited once again to occupy “the empty chair,” and draw near “the glowing fire.”

In the magical twilight of Halloween, both the dead and the living wish nothing more than to forget for a while  the pain and sorrow of “the weary trenches.”  In this spellbound time, supernatural grace suffuses the natural world too, as stars gleam “like silver fish caught in a net” and the robin sings “Nunc dimittis” like a choir boy at Evensong: “Lord, now lettest thou thy servant depart in peace according to thy word, for mine eyes have seen thy salvation.” And most precious of all, in this world of magical thinking is the assurance, “we will welcome you home.”

The poem discloses the deep bond of kinship between the souls of the war dead and those who, “dreaming alone with…sorrow,” grieve for them at home.  All have been transformed into ghosts, and all are united in the empty, lost futures that stretch before them.  With sad confidence, the voice of the poem can say, “We have no fear of you” – for the horror is to be found in the war, not in its dead.

On July 1, 2016, groups of men dressed as First World War soldiers walked the streets and sidewalks of Great Britain in silence.  Appearing in shopping malls, train stations, and parks, the “ghost soldiers” were largely silent except for occasionally joining together to sing the trench song “We’re Here Because We’re Here.”  The commemorative tribute was inspired “in part from tales told during and after the First World War by people who believed they had seen the ghosts of loved ones they had lost.”[iii]

[i] Robert Graves, Goodbye to All That, 1929.  The soldier he visited was Siegfried Sassoon.
[ii] To learn more about Spiritualism during the war, see “’A solace to a tortured world…’—The Growing Interest in Spiritualism during and after WW1” by Suzie Grogan, published online at World War I Centenary: Continuations and Beginnings.
[iii] “Secrets behind #WeAreHere revealed” by Ann Gripper, Rod McPhee, and Nicola Oakley.  The Mirror, 1 July 2016.
Posted by Connie R. at 11:39 PM