Nearly all of the poems of the First World War that have been preserved in the literary canon take as their subject scenes and actions from the trenches and fields of battle.  What have often been omitted are the many beautiful poems that describe men’s thoughts of home and of loved ones.

Robert E. Vernède, “of the dark eyes and the unforgettable smile,”* was a married man of thirty-nine, a published novelist, and an enthusiastic gardener when he enlisted with the British army.  Between November of 1915 and September of 1916, he served in some of the most dangerous locations on the Western Front, in the Ypres Salient and at the Somme.  He was injured at the Somme in September, sent home to recover, and returned to the Western Front in January of 1917.

A friend of the writer GK Chesterton (they had attended school together), Vernède wrote hundreds of letters home.  These letters reveal him as an officer who cared deeply about his men, a writer with a dry wit and self-deprecating sense of humor, and a husband who was exceptionally close to his wife, Caroline Howard Vernède. 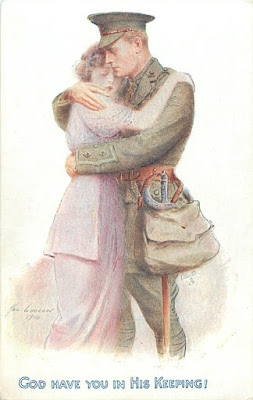 What shall I bring to you, wife of mine,
When I come back from the war?
A ribbon your dear brown hair to twine?
A shawl from a Berlin store?
Say, shall I choose you some Prussian hack
When the Uhlans** we overwhelm?
Shall I bring you a Potsdam goblet back
And the crest from a Prince's helm?

Little you'd care what I laid at your feet,
Ribbon or crest or shawl--
What if I bring you nothing, sweet,
Nor maybe come home at all?
Ah, but you'll know, Brave Heart, you'll know
Two things I'll have kept to send:
Mine honour for which you bade me go
And my love--my love to the end.
--Robert Ernest Vernède

At its start light-hearted and optimistic, the poem imagines not only a British victory, but a soldier’s homecoming as he brings gifts and spoils of war.  As the poem continues, the soldier-husband’s gifts become increasingly extravagant and absurd.  The list begins with a ribbon for his dear wife’s hair, and then goes on to detail a shawl from Berlin (indicating that the German capital city has been taken by the British), a horse from the Prussian cavalry, a priceless crystal goblet crafted in Potsdam (where glassware was fashioned for the Prussian royal household), and finally an elaborate gilded crest from the helmet of the German crown prince himself.

Tender and whimsical, Vernède acknowledges that his wife would little care what material gifts he brings her.  But then the poem turns serious as the writer imagines a wholly different and much more likely future: what if he never returns home, but instead is killed in battle?  The final four lines are intended to reassure his wife, even as he addresses her as “Brave Heart.”  If her husband is killed in battle, she can take comfort in knowing that his honour and his love for her will remain long after his death.

We will probably never know if Carol Vernède found the poem amusing or of comfort, but Robert Vernède did not return to their home and gardens in Standon, Hertfordshire.  In his last letter to his wife, written on Easter Sunday of 1917, the day before he was killed, Robert Vernède closed with these lines: “I think it will be summer soon, and perhaps the war will end this year and I shall see my Pretty One again.”

Remembering Vernède, his close friend F.G. Salter said, “He loved life, with a solid, English love ; he loved his garden, his art, his friends ; above all, he loved the wife who for all the years since their betrothal had been the inspirer and encourager of everything he did, and who was so in this decision also, and to the end.  He very greatly desired to come back alive after the war.  But it seemed to him that such a desire was, for the present, simply irrelevant."

Vernède’s poems were published posthumously in 1917, and in the introduction to the slim volume, Edmund Gosse writes, “The circumstances of his death repeat the story of a thousand such events in this prodigious war. Vernède was in charge of his platoon on the advance, and was in front with a couple of his men when they suddenly came upon a concealed enemy machine gun. He was hit, and it was immediately seen that the wound was serious. His men carried him back alive to the aid station, but he died upon the further journey. He was buried in the French cemetery at Lechelle.*** His friend Captain F. E. Spurling put up a cross and planted around it a large bowl of daffodil bulbs which had been the joy of the poet when they flowered in the company mess. They now, in their long sleep, watch over his rest.”  Vernède would have appreciated the flowers; his last words were “Send my love to my wife.” 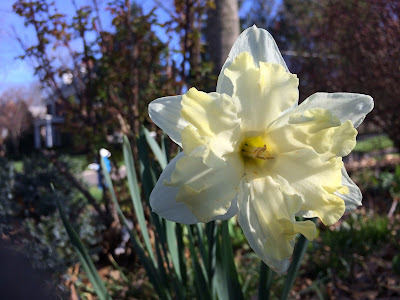 *From Edmund Gosse’s introduction to Vernède’s posthumously published book of poetry, War Poems and Other Verses.
** British term for German cavalry units
*** His remains were moved during burial concentrations, and he now rests at Lebucquiere Communal Cemetery Extension

Email ThisBlogThis!Share to TwitterShare to FacebookShare to Pinterest
Labels: Vernede