While British men fought in the trenches, British women served in the fields.  The Women’s Land Army was begun in 1915, and by 1917 an estimated one quarter of a million women were working as agricultural labourers.  The “Land Girls” fed livestock, milked cows, plowed fields, and harvested fruits and vegetables.  Britain’s labour shortage was real: over three million men had left for military service, and women workers were desperately needed to maintain the country’s food supply.

Despite the need for women workers, resistance was high.  Those with traditional values viewed the Land Girls’ uniform trousers as disgraceful cross-dressing. In response, the government issued posters that celebrated the women’s patriotic efforts and feminized the new roles in an attempt to change public attitudes.*

Rose Macaulay, the daughter of a Cambridge professor, volunteered with the Women’s Land Army (WLA) in 1916.  Working at Station Farm outside Cambridge, Macaulay wryly wrote of her experiences in the poem “Spreading Manure.”

There are fifty steaming heaps in the One Tree field, 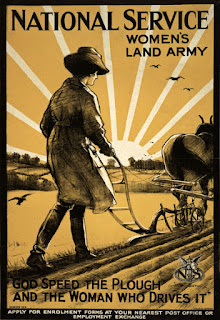 Lying in five rows of ten,
They must all be spread out ere the earth will yield
As it should (and it won’t, even then).

Drive the great fork in, fling it out wide;
Jerk it with a shoulder throw.
The stuff must lie even, two feet on each side,
Not in patches, but level -- so.

When the heap is thrown you must go all round
And flatten it out with the spade,
It must lie quite close and trim till the ground
Is like bread spread with marmalade.

The north-east wind stabs and cuts our breath;
The soaked clay numbs our feet.
We are palsied, like people gripped by death,
In the beating of the frozen sleet. 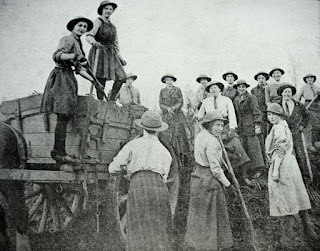 I think no soldier is so cold as we,
Sitting in the Flanders mud.
I wish I was out there, for it might be
A shell would burst to heat my blood.

I wish I was out there, for I should creep
In my dug-out, and hide my head,
I should feel no cold when they laid me deep
To sleep in a six-foot bed.

I wish I was out there, and off the open land:
A deep trench I could just endure.
But things being other, I needs must stand
Frozen, and spread wet manure.
The first three stanzas give a sense of the tedium of the work: fifty steaming piles of dung must be forked, lifted, and flung before the stinking excrement can be evenly smoothed across the field “like bread spread with marmalade.” The simile ironically highlights the contrast between the typical domestic sphere of women and the work of the Land Girls, and the image linking manure with marmalade is both apt and disgusting. 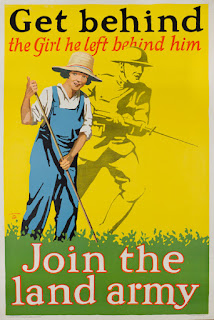 The last four stanzas use wry humor to highlight a similarity that is even more shocking and disturbing: Macaulay dares to compare the discomforts of the Land Girls’ work with the conditions of the men on the front lines of battle.  Both the soldiers and the Land Girls battle the cold and wallow in the frozen mud.  But “Spreading Manure” argues that the women have it worse: without the shelter of dugouts, they suffer longer spells in the freezing sleet and cold and are more exposed to the elements.  Without bursting shells, the women lack the excitement that warms the blood of the soldiers.  And without the threat of death, the Land Girls cannot anticipate an end to their misery.

The poem makes these audacious claims as it subtly challenges the social order that limited women’s participation in the war.  The poem’s repeated refrain “I wish I was out there” can be viewed as naïve and self-indulgent – or as a protest against the cultural restrictions that consigned women to roles that were tedious and frustratingly confining.

As a young girl, Macaulay was a tomboy who had wanted to be a naval captain; a New York Times book review notes that “a sense of adventure was the ‘dominant feature’ of her life.” British writer VS Pritchett described Macaulay as “lively as a needle” with an “irreverent eye and rapid, muttering wit….Activity was her principle, asking questions her ironical pleasure.”

“Spreading Manure” teases the reader with questions: is the comparison between the Land Girls and soldiers’ lives self-absorbed or satirical?  Is confinement worse than danger? Or are all attempts to weigh sacrifice and suffering absurd by their very nature?  In her 1926 novel Crewe Train, Macaulay remarked, “Nothing, perhaps, is strange, once you have accepted life itself, the great strange business which includes all lesser strangenesses.” The same could be said of war.
*For more on the Land Girls as unconventional soldiers of the First World War, see this link.
Posted by Connie R. at 10:19 AM