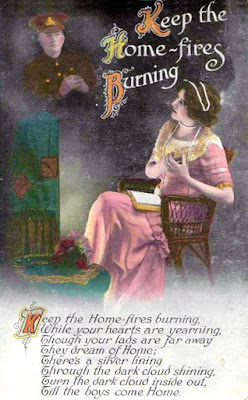 In April of 1916, at the same time that the fight for Verdun was being waged on the Western Front, an advertisement in London papers urged women “Don’t let WAR-STRAIN spoil your complexion.”  The makers of Ven-Yusa, a “novel Toilet crème,” cautioned women that “Anxiety for relatives at the Front, grief for those who have ‘gone west,’ and the stress of voluntary war work, are all bad for the skin.”  The contrasts between life at the front and life on the home front were dramatic. Soldiers wrote about their sense of dislocation while on leave, and the soldier poet Siegfried Sassoon castigated women’s naïve patriotism and blind innocence in his poem “The Glory of Women.”

Sadly, what has been lost in time are the voices of women who grappled with the paradoxical complexities of war.  In her poem "Homes," Margaret Widdemer, an American writer who was awarded the Pulitzer Prize in 1919 (sharing the honor with Carl Sandburg), explores the contrasts between sites of war and places of peace.

The lamplight's shaded rose
On couch and chair and wall,
The drowsy book let fall,
The children's heads, bent close
In some deep argument,
The kitten, sleepy-curled,
Sure of our good intent,
The hearth-fire's crackling glow:
His step that crisps the snow,
His laughing kiss, wind-cold. . . .

Only the very old
Gifts that the night-star brings,
Dear homely evening-things,
Dear things of all the world,
And yet my throat locks tight. . .

Somewhere far off I know
Are ashes on red snow
That were a home last night.
-Margaret Widdemer

The first stanza of Widdemer’s poem describes a world seen through the rose-tinted light of a parlor lamp. It’s an idyllic domestic scene: a kitten naps before the fire, and children enjoy a quiet squabble while their mother nods off over the book she is reading.  At hearing the father’s “step that crisps the snow,” the family eagerly welcomes him home from the wind-cold night, enjoying his “laughing kiss.”

The second stanza begins by reflecting on the universal timelessness and beauty of these “very old gifts,” giving thanks for a husband’s return and family gathered before the fireside.  Home, security, and love -- these are the dear things that the "night star brings." But the stanza ends with a short six-word sentence, the hinge on which the poem turns: “And yet my throat locks tight.”

Warm and safe in her own home, the woman who speaks in the poem is deeply aware of her connection to other women who struggle in far different circumstances.  While her home rosily glows with lamplight, another woman’s home burns in the fires of war.  As her husband returns from a winter’s walk, other women’s sweethearts, sons, and husbands huddle in the bitter cold of the trenches.

German poet Maria Benneman’s poem “Visé” relates a similar moment of sympathy for other women whose lives are destroyed by the war -- in this case, destroyed by the actions of her own soldier-husband:
"you do your duty,
Blow this house up like all the rest.
…Was that a cry?  Or just a broken string?
Music, music behind you has collapsed."

It’s easy to stereotype women’s views of the First World War as naïve and jingoist when one of the most commonly anthologized female poets is Jessie Pope (to whom Wilfred Owen angrily directed his most famous poem, “Dulce et Decorum Est).  A wider reading of women poets provides a richer and more complex understanding.  Margaret Widdemer is just one of the many poets who have been forgotten, despite her very positive critical reception at the time of the war.

Widdemer was a prolific writer and an associate of Ezra Pound, F. Scott Fitzgerald, and T.S. Eliot, but she is chiefly remembered today for popularizing the word middlebrow in her 1933 essay “Message and Middlebrow.”  The essay itself, like its author, has been largely forgotten, an irony that would not have been lost on Margaret Widdemer, for in “Message and Middlebrow,” she argues that literary critics and intellectual elites have coerced the reading public into accepting a narrow and truncated view of literary merit, one that attempts to exclude works that address ideals and morality.

Widdemer’s poem “Homes” depends on a shared sense of morality and humanity: it urges readers today as surely as it did nearly 100 years ago to consider the effects of war, even when those wars are very far from home, even when destruction is targeted at the enemy.  The poem challenges us to a visceral empathy with all who are caught up in devastating conflicts.