The Rising and the War 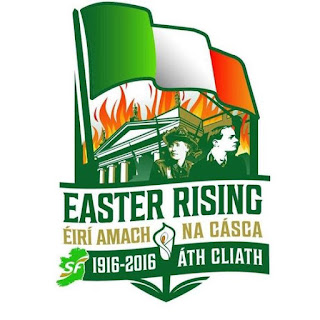 On April 24th, Easter Monday of 1916, Irish republicans wishing to end British rule in Ireland used armed force to overtake strategic locations in Dublin and to proclaim an independent Ireland. The British Army responded by violently suppressing the Rising, executing its leaders, and imposing martial law.  A brief blog entry cannot provide the full background and context necessary to understand the Easter Rising, but the First World War played a significant role in dividing Irish loyalties.

Many Irish had volunteered to serve in the British Army, believing that their service would be rewarded by British acceptance of Irish Home Rule.  However, in the aftermath of the Easter Rising and the associated violence and repressive actions of the British Army, Irishmen who had chosen to fight for England and with the British Army were commonly viewed as disloyal to Ireland.

Speaking to this context of deeply divided loyalties, George William Russell, Irish nationalist, writer, and pacifist (known by the pseudonym AE), called for reconciliation and unity among the people of Ireland.  In a letter to the Irish Times written in December of 1917, Russell wrote,
“I myself am Anglo-Irish, with the blood of both races in me, and when the rising of Easter Week took place, all that was Irish in me was profoundly stirred, and out of that mood I wrote commemorating the dead.  And then later there rose in memory the faces of others I knew who loved their country, but had died in other battles.  They fought in those because they believed they would serve Ireland, and I felt these were no less my people.  I could hold them also in my heart and pay tribute to them.  Because it was possible for me to do so, I think it is possible for others; and in the hope that the deeds of all may in the future be a matter of pride to the new nation I append here these verses I have written.”

The poem Russell included with his letter was “To the Memory of Some I Knew Who Are Dead and Who Loved Ireland.”  In alternating stanzas, the poem honors both those killed in the Easter Rising and the Irish who died on the battlefields of the First World War.

Their dream had left me numb and cold,
But yet my spirit rose in pride,
Refashioning in burnished gold
The images of those who died,
Or were shut in the penal cell.
Here's to you, Pearse, your dream, not mine,
But yet the thought for this you fell,
Has turned life's waters into wine.

You who have died on Eastern hills
Or fields of France as undismayed,
Who lit with interlinked wills
The long heroic barricade,
You, too, in all the dreams you had,
Thought of some thing for Ireland done.
Was it not so, Oh, shining lad,
What lured you, Alan Anderson?

I listened to high talk from you,
Thomas MacDonagh, and it seemed
The words were idle, but they grew
To nobleness by death redeemed.
Life cannot utter words more great
Than life may meet by sacrifice,
High words were equaled by high fate,
You paid the price.  You paid the price.

You who have fought on fields afar,
That other Ireland did you wrong
Who said you shadowed Ireland’s star,
Nor gave you laurel wreath nor song.
You proved by death as true as they,
In mightier conflicts played your part,
Equal your sacrifice may weigh,
Dear Kettle, of the generous heart.

The hope lives on age after age,
Earth with its beauty might be won
For labour as a heritage,
For this has Ireland lost a son.
This hope unto a flame to fan
Men have put life by with a smile,
Here’s to you, Connolly, my man,
Who cast the last torch on the pile.

You, too, had Ireland in your care,
Who watched o’er pits of blood and mire,
From iron roots leap up in air
Wild forests, magical, of fire;
Yet while the Nuts of Death were shed
Your memory would ever stray
To your own isle.  Oh, gallant dead –
This wreath, Will Redmond, on your clay.

Here’s to you, men I never met,
Yet hope to meet behind the veil,
Thronged on some starry parapet,
That looks down on Innisfail,
And see the confluence of dreams
That clashed together in our night,
One river, born from many streams,
Roll in one blaze of blinding light.
--A.E.


In the first, third, and fifth stanzas, the poem memorializes leaders of the Easter Rising who were executed by the British: Patrick Pearse, Thomas MacDonagh, and James Connolly (readers wishing further biographical information can follow the hyperlinks in the poem).  As Russell’s poem argues, even for those not sharing the dream of the Easter Rising, these men’s willingness to die for an independent Ireland was transformative, turning life’s water into wine and refashioning the men’s deaths into “burnished gold.” As WB Yeats wrote, “a terrible beauty is born.” The executed leaders of the Easter Rising paid the ultimate price, and laying down their lives, they fanned the hopes of Irish independence.

But that same price was paid by the Irishmen named in the second, fourth, and sixth stanzas of the poem: Alan Anderson, Thomas Kettle, and Willie Redmond (for further biographical information, see the associated links).  Although killed in battle while fighting with the British Army, these men too fought for a dream and gave their all in the blood and mud of the Western Front, dying for their own isle, for their homes, for “Thought of some thing for Ireland done.”

The poem’s last stanza attempts to reconcile the deep Irish divisions exacerbated by the war.  It imagines the two divided political causes as streams that join in a mighty confluence, mixing the best of each and amalgamating the differences until they form one majestic river that rolls forward in a “blaze of blinding light.” Whether a prophet or naïve optimist, Russell believed that if the people of Ireland were able to put aside their internal differences, they could achieve greatness as a free nation.  In the same letter in which he published his poem for those who had died for Ireland, Russell wrote,
“And here I come to the purpose of my letter, which is to deprecate the scornful repudiation by Irishmen of other Irishmen, which is so common at present, and which helps to perpetuate our feuds.  We are all one people. We are closer to each other in character than we are to any other race.  The necessary preliminary to political adjustment is moral adjustment, forgiveness, and mutual understanding.”

The centenary of the Easter Rising and the First World War may perhaps prompt the kind of remembrance and reconciliation that Russell dreamed of.  An article written by Rowan McGreevy and published in the Irish Times in April of 2016 reminds us that in the same week in which 488 Irish were killed in Dublin during the Easter Rising, 532 men of the Irish Division were gassed, bayoneted, shelled, and shot in the gas attacks outside Hulluch in northern France. The article also calls us to remember the sacrifice of the hundreds of Germans who died in the attacks at Hulluch.

Perhaps nothing makes the case so strongly, however, for the complexities of Ireland's political situation and the need for peace and reconciliation than one family’s poignant story from that tumultuous time.  Fighting with the Royal Dublin Fusiliers and caught up in the gas attacks at Hulluch, Private John Naylor died on April 29th.  That same day, John Naylor's wife, Margaret, was shot and killed during the Easter Rising as she crossed Dublin's Ringsend drawbridge. Their three young orphaned daughters, Maggie, Kitty, and Tessie, survived, bearing the burdens of the past as they grew up into the future of the emerging nation of Ireland.