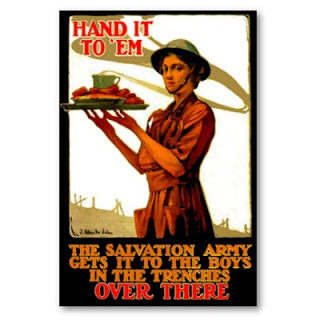 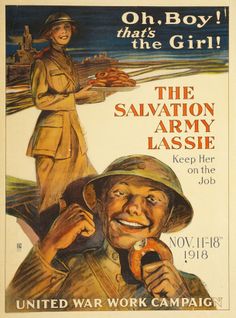 A century ago, charitable organizations such the Salvation Army, the Jewish Welfare Board and the Young Men's Christian Association (YMCA) mobilized to support the soldiers of the American Expeditionary Forces (AEF). The YMCA alone operated 1,500 canteens and nearly 4,000 huts and recreational tents, many of which were located just behind the front lines.  Never before had a nonprofit, community-based organization assisted the military on such an immense scale.  With a paid staff of over 26,000 and an estimated 35,000 volunteers, the YMCA was responsible for “90% of all welfare work” that supported American troops in Europe.*


Canteens staffed by friendly American female volunteers boosted morale and reminded the doughboys of home as the women dispensed not only doughnuts, but also hot chocolate, coffee, cookies, and pie.  We will most likely never know the name of the doughboy who penned the following popular poem that celebrated one of the few pleasures of the war.

Home is Where the Pie Is 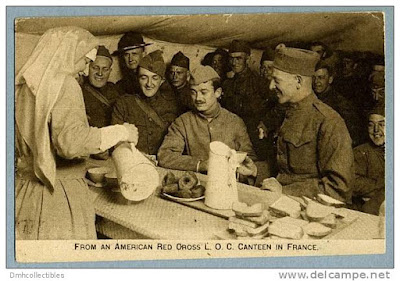 “Home is where the heart is” –
Thus the poet sang;
But “home is where the pie is”
For the doughboy gang.
Crullers in the craters
Pastry in abris
Our Salvation Army lass
Sure knows how to please.

Watch her roll the pie crust
Mellower than gold;
Watch her place it neatly
Within its ample mold;
Sniff the grand aroma
While it slowly bakes—
Though the whine of Minnie shells
Echoes far awakes. 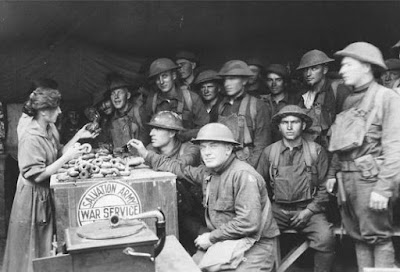 Tin hat for a halo!
Ah, she wears it well!
Making pies for homesick lads
Sure is “beating hell”;
In a region blasted
By fire and flame and sword
Our Salvation Army lass
Battles for the Lord!
Call me sacrilegious,
And irreverent, too;
Pies? They link us up with home
As naught else can do!
“Home is where the heart is”—
True, the poet sang;
But “home is where the pie is”
To the Yankee gang!
--Anonymous

The poem speaks with such irrepressible good humor that you can almost see the smile on the face of the soldier who has composed an ode to the most American of desserts.  Pie is better than “Crullers in the craters” (perhaps one of the most original alliterative lines in war poetry); it is the antithesis of “fire and flame and sword” and the horrors of the Western Front.  Apple pie – mellow, ample, and grand – serves up memories on a plate.

This isn’t a poem that expresses one man’s musings on the war, but rather a collective anthem that remembers home.  The Salvation Army volunteer is our lass; she serves so near to the front that she wears a tin helmet like a halo, and her bravery inspires all the “doughboy gang.”

The Salvation Army reported that the young women who served at the canteens “were the touch of home which comforted the soldier on the front line….Stories have come back to our headquarters of great husky lads who called nineteen year old girls ‘Ma.’ It was not funny, it was perfectly natural, and the girls and the men understood the great instinct which prompted the affectionate greeting” (Atlanta Constitution, 13 April 1919).

Irreverent?  Sacrilegeous? The women canteen workers understood, “Whatever you did for one of the least of these brothers of Mine, you did for Me” -- even in the simple baking and serving of pie.
*This and other statistics on the YMCA in the First World War can be found at Doughboy Center, “The History of the YMCA in World War I.”