The Gift of India 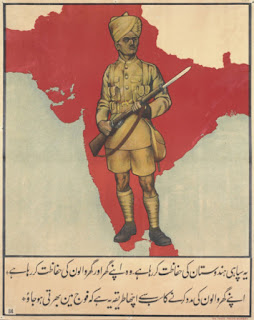 Over one million Indian troops from Britain’s colonial empire served in the British army in World War I.  Nearly 75, 000 died on foreign fields, never returning home, and over 70,000 were wounded.  Serving in the Ypres Sector and other sites on the Western Front, as well as in Mesopotamia and Gallipoli, Indian troops were of vital significance in many battles of the First World War.

Sarojini Naidu, who served as governor of the provinces of Agra and Oudh and was elected the President of  the Indian National Congress, was also known as the nightingale of India.  Her poem “The Gift of India” commemorates the sacrifices of her countrymen.

The Gift of India 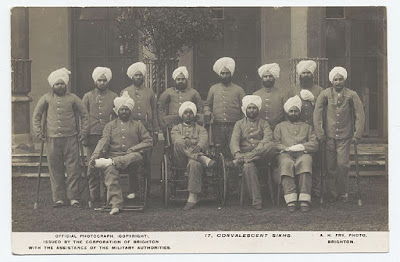 Is there aught you need that my hands withhold,
Rich gifts of raiment or grain or gold?
Lo! I have flung to the East and West
Priceless treasures torn from my breast,
And yielded the sons of my stricken womb
To the drum-beats of duty, the sabres of doom.

Gathered like pearls in their alien graves
Silent they sleep by the Persian waves,
Scattered like shells on Egyptian sands,
They lie with pale brows and brave, broken hands,
They are strewn like blossoms mown down by chance
On the blood-brown meadows of Flanders and France.

Can ye measure the grief of the tears I weep
Or compass the woe of the watch I keep?
Or the pride that thrills thro' my heart's despair
And the hope that comforts the anguish of prayer?
And the far sad glorious vision I see
Of the torn red banners of Victory?

When the terror and tumult of hate shall cease
And life be refashioned on anvils of peace,
And your love shall offer memorial thanks
To the comrades who fought in your dauntless ranks,
And you honour the deeds of the deathless ones
Remember the blood of thy martyred sons!
--Sarojini Naidu

Pressed down and overflowing, the gifts of India are abundantly extravagant.  Nothing has been withheld, not the richest of garments, grain, or gold.  More precious still, the sons of India have been entrusted to the British war cause, torn from their mothers’ breasts and yielded to “the drum beats of duty, the sabers of doom.”

How has the gift been received?  Broken and far from home, the dear bodies of the sons of India lie in “the blood-brown meadows of France and Flanders,” thousands of miles from their country, an insurmountable distance from their families who ache with loss.  The bright and shining gifts of India’s manhood are pearls buried in a foreign field, as numerous and scattered as shells on the sand.

How does one measure the grief of Indian mothers whose sons have died too young? To cope with such unimaginable loss, the sacrifice is set against the pride, hope, and glory of Allied victory.  The poem imagines what Indian deaths have purchased: a world in which terror and hate will have ended, “refashioned on anvils of peace.”  Love and memory will be the building bricks of this new world, laid on the foundation of the gift of India – the lifeblood of her beloved sons.

"Strewn like blossoms mown down by chance," the gift of India has been commemorated on the Western Front battlefield of Neuve Chapelle, where Indian troops first fought as a unit.  There, a memorial honors Indian soldiers and laborers who were killed on the Western Front and who have no known graves – over 4,700.  At the Neuve Chapelle Memorial, one may “honour the deeds of the dauntless ones” and “Remember the blood of my [India’s] martyred sons!”

In 2015, the essay “Why the Indian soldiers of World War I were forgotten” was published in the BBC News Magazine.  Its author states “The Indian soldiers who died in the First World War …. gave their ‘todays’ for someone else's ‘yesterdays’. They left behind orphans, but history has orphaned them as well. As Imperialism has bitten the dust, it is recalled increasingly for its repression and racism, and its soldiers, when not reviled, are largely regarded as having served an unworthy cause.  But they were men who did their duty, as they saw it. And they were Indians. It is a matter of quiet satisfaction that their overdue rehabilitation has now begun.” 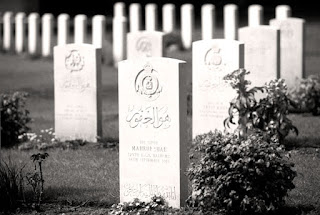