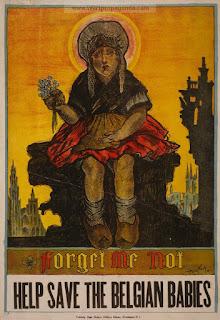 The best-known poems of the First World War, such as those written by Wilfred Owen and Siegfried Sassoon, strongly protest the war as they describe the senseless horrors of battle.  However, among the voices that have been forgotten are the popular poems of the day that justified the war, poems that advocated violence so as to balance the scales of justice. Émile Cammaerts, a Belgian writer who was living in London, had tried to enlist when he heard of the invasion of his country, but was denied due to his age. In her biography of her father, Cammaerts’ youngest daughter writes that at thirty-six, he “already had a slight academic stoop, [and] was painfully thin.”*


Cammaerts turned to verse to express his patriotism and to gain public support for Belgians who had suffered during the German invasion of their country.  His poem “To My Country in Bondage” (À Ma Patrie Enchaînée”) concludes,
How long, oh how long,
My own country,
Wilt thou stretch out towards me
Patiently
Thy bruised hands?

Cammaerts’ 1915 volume of World War I verse, Belgian Poems: Patriotic Songs and Other Poems, was written in French and translated into English by his British wife.

I wish that every hour of life
May wound your heart.
I wish each step you take in strife
May burn your feet.
I wish that you may be both blind and deaf 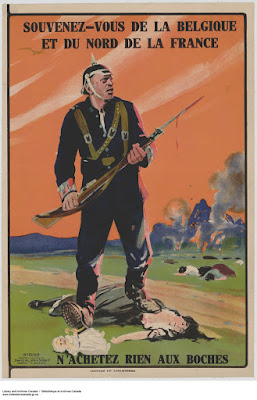 Unto all lovely things,
That you may walk all day and night
Beneath a sky bereft of light,
Seeing no flowers in the fields,
Hearing no word, no bird’s sweet song
To mind you of the wives and children left
Alone at home so long.
I wish the soil—our country’s soil—
May open and become
A quicksand ‘neath your ranks,
And that the streams—our country’s streams—
May overflow their banks
And drown your hosts.
I wish your nights may poisoned be
By all our martyrs’ ghosts,
That you may neither watch nor sleep,
But ever breathe the smell of blood
By our Holy Innocents shed.
I wish the ruins of our homes
May crash above your head,
That your brain with anguish reel,
That doubt confound your rage,
That you may wander like lost beasts
Before the wild storm flying…

I wish that you may live to feel
All we have suffered of late,
So that God may spare you the punishment supreme—
His eternal vengeance and hate.
—Émile Cammaerts

The speaker of the poem imagines a future in which the enemy’s soldiers are exiles, condemned to wander “like lost beasts/Before the wild storm flying” in a land of barren loneliness. As the men of the German Army are swallowed by quicksand, drowned in rivers, poisoned by ghosts, and buried in the collapse of the Belgian homes they occupy, German survivors are doomed to “ever breathe the smell of blood" shed by Belgian innocents. The poem desperately wishes the German Army to feel the same fear, suffering, and death as Belgians experienced when the Germans overran their country.

The poem echoes the message of propagandist war posters of the time, but it is also a poem of hope  – hope that the Germans will suffer indescribable torments, but also hope that those torments will provoke German doubt about the rightness of their cause, doubts that will call into question the rage that motivates the German military onslaught.  The poem deliberately stops short of wishing eternal damnation on the German soldiers, but instead calls down calamity on their heads that may lead to their repentance — and perhaps an end to the war.

Cammaert's volume of World War I verse, Belgian Poems: Patriotic Songs and Other Poems, was written in French and translated into English by his British wife.  The couple had six children: their son Pieter was killed in the Second World War while serving with the British Royal Air Force in 1941. Pieter’s older brother, Francis, was a pacifist and conscientious objector in the Second World War, but after the death of his brother he joined British Special Operations, organizing resistance groups in occupied France to sabotage German military operations. The Cammaerts’ grandson is Michael Morpurgo, the British Children’s Laureate and author of the novels War Horse and Private Peaceful.