The Law of the Trench

Before Irish-born Cyril Morton Horne joined the King’s Own Scottish Borderers and served nearly a year fighting on the Western Front, he had sung and danced in musical comedies in London’s West End and on New York’s Broadway.  In Horne’s last role before joining the British Army, he appeared in the operetta Mlle. Modiste as the romantic lead, a French army captain in love with a shop girl.  In that role, he’d sung, “For there’s always a hitch in it somewhere, and the thought sets your brain in a whirl, for seldom if ever do you find them together – the time and the place and the girl.”

He found himself in a very different drama in 1915, one of the few officers from his company who survived the Battle of Loos unwounded.  Sometime after the battle, in late 1915, he wrote what is considered to be one of the earliest poems describing the realities of the trench life: “The Moles.”  I’ve included an excerpt of the poem; the full text can be found on pages 3-4 in Songs of Shrapnel, and Other Verse by Cyril Morton Horne.

I’ve been in a trench for fifteen days, 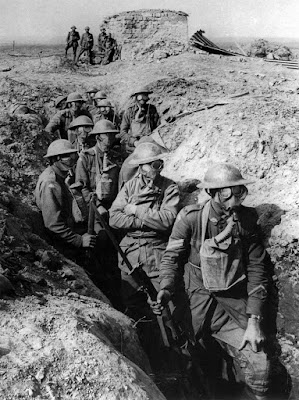 I'm choked for the want of air;
It's harvest time where my mother stays,
And I'm wishing that I was there.

I've ceased to count in the scheme of things.
My courage has waned and set;
It's trysting-time where the mavis sings
And I'm wishing I could forget.
….
We've learnt the law of shot and shell,
We've learnt the law of steel;
But the Law of the Trench is a cultured Hell
For it stifles the power to feel.
….
We have used our youth and lost the strength
That the spirit of youth controls;
We have become no more at length
Than partially human moles.
….
And this is our Fate: When the Gods are kind
Our existence shall simply cease —
A sniper's bullet — a trench that's mined —
God-speed, and a quick release!

What is striking about the poem is the matter-of-fact way in which it describes how the war has transformed men into animals.  The guiding laws of morality and faith have been replaced with “the law of shot and shell…the law of steel,” and months of living half-underground have blunted the soldiers’ ability to feel.  The young men in the trenches are no more than “partially human moles.”  They have seen repeated attempts to break free in charges over the top, but these have resulted only in thousands of dead and wounded, some bodies never recovered, some trapped between the lines, many hastily buried in make-shift cemeteries.  The sum of these experiences brings the poignant realization, “I’ve ceased to count in the scheme of things.”  Men have lost not only their humanity, but their individual identities in the mass slaughter.

Cyril Morton Horne was killed on 27 January, 1916 when he and a fellow officer ignored “The Law of the Trench” and attempted to rescue a wounded comrade lying in No Man’s Land.  The preface to his posthumously published book of poems states, “A shrapnel shell exploded overhead just as his comrades were ready to cheer him for his heroic rescue. Both men were killed instantly.”

Three years earlier, Horne had sung in the finale of Mlle Modiste, “Alas to part, how great the sorrow, to leave the friends grown fond with years, to know perchance that on the morrow, for love and smiles come doubts and tears.”  His wife Marie chose as the epitaph for his grave the first two lines from one of his poems -- “Aftermath”: 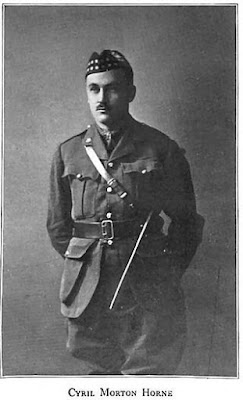 A grim gray tribute of memory
Is all that we have left to give.
To those who have fought and fallen
From those who sorrow and live.
Memory lives; and we wonder
If the law of the Gods was kind,
For the hardest battle was fought by
The Somebody-left-behind.