The previous post featured the Belgian poem “New Year’s Wishes to the German Army,” which inflamed support for the First World War and cursed the German soldiers.  However, the most famous hate-the-enemy, nationalistic poem of the war was written by Ernst Lissauer, a German-Jewish poet.  His “Hymn of Hate” was composed shortly after war broke out in 1914, and in just a few short months, it was translated and published in the United States (then a neutral nation). The New York Times admired Lissauer’s technical skill, but described the poem as “simply abominable,” and “a brutal and wicked production.”* In Germany, not surprisingly, the poem was an immediate success.  The Kaiser honored Lissauer, and the Crown Prince of Bavaria ordered that the poem be printed and distributed to his troops.

In the Captain's Mess, in the banquet hall,
Sat feasting the officers, one and all,
Like a sabre blow, like the swing of a sail,
One seized his glass and held high to hail;
Sharp-snapped like the stroke of a rudder's play,
Spoke three words only: "To the Day!"
Whose glass this fate?
They had all but a single hate.
Who was thus known?
They had one foe and one alone--
ENGLAND! 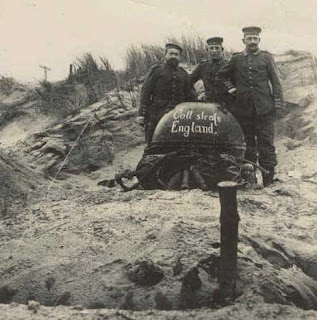 Take you the folk of the Earth in pay,
With bars of gold your ramparts lay,
Bedeck the ocean with bow on bow,
Ye reckon well, but not well enough now.
French and Russian, they matter not,
A blow for a blow, a shot for a shot,
We fight the battle with bronze and steel,
And the time that is coming Peace will seal.
You we will hate with a lasting hate,
We will never forego our hate,
Hate by water and hate by land,
Hate of the head and hate of the hand,
Hate of the hammer and hate of the crown,
Hate of seventy millions choking down.
We love as one, we hate as one,
We have one foe and one alone--
ENGLAND!

(Here is the text of the poem in German.)

Unlike Cammaerts’ “New Year’s Wishes to the German Army,” this poem doesn’t focus on the harm it wishes to the enemy or the specific tortures it wishes to inflict on opposing troops.  Instead, the repeated We is the focus of the poem, as Germans join together in song, feasts, and toasts to vow their common hatred of ENGLAND!  The British are mocked as cowards who crouch behind the “dark grey flood” of the English Channel, and Germany's shared sense of outrage at England's perceived betrayal fosters German unity: “We love as one, we hate as one.” The German loathing for England inspires battle zeal as they “fight the battle with bronze and steel.” While the poem is titled as a hymn, its sentiment seems nearer to a rousing drinking song, and it’s easy to imagine with that a few editorial changes, it could work as a modern sports anthem.

Curiously, the poem became almost as popular in England as in Germany.  Lissauer, who had also coined the German Army’s slogan “Gott Strafe England” (may God punish England), could not have anticipated that the British would view his war slogan as a compliment, nor that the British would find a great deal of amusement in parodying his “Hymn of Hate.” Newspapers in England published the text of the poem with an accompanying musical score, and the choir at the Royal College of Music performed it as a joke.  A review of the performance noted that although the 100-member British choir was instructed to sing “with plenty of snarl,” their laughter made this difficult, and “when they came to the word England, they rolled it out in fine style.”

Lissauer himself grew to regret writing the poem.  In 1926, he wrote that instead of writing a poem of hatred against England, he should have written a poem of love for Germany.  In the years following World War I, Germany, the country he so loved, rejected him as a Jew and accused him of “fanatical hatred” that was “utterly un-German” and “characteristic of nothing so much as the Jewish race.” Tragically, the hatred that inspired his poem did not end with the First World War.
*This and other historical information on the poem and its author can be found in the 1987 History Today article by C.C. Aronsfeld, “Ernst Lissauer and the Hymn of Hate.”
Posted by Connie R. at 8:04 AM