There are war poems that ring with exultation: “Stand in the trench, Achilles,/ Flame-capped, and shout for me.” Others sound with ear-shattering blasts and the confusion of artillery fire: “Dance, little girls, beneath the din!/The four-point-ones are talking.” Edward Thomas’s poem “Rain” never raises its voice above a whisper as it contemplates the loneliness of war.

Rain, midnight rain, nothing but the wild rain
On this bleak hut, and solitude, and me
Remembering again that I shall die
And neither hear the rain nor give it thanks
For washing me cleaner than I have been
Since I was born into solitude.
Blessed are the dead that the rain rains upon:
But here I pray that none whom once I loved
Is dying tonight or lying still awake
Solitary, listening to the rain,
Either in pain or thus in sympathy
Helpless among the living and the dead,
Like a cold water among broken reeds,
Myriads of broken reeds all still and stiff,
Like me who have no love which this wild rain
Has not dissolved except the love of death,
If love it be towards what is perfect and
Cannot, the tempest tells me, disappoint.
--Edward Thomas

The poem recalls the soporific properties of rain at night, but sets the sound in a lonely context, where even though this man has found “bleak” shelter, he listens in solitude and in chilling awareness of the dead and wounded that lie out in the cold rain.  The poem is a quietly desperate prayer for all who are “Helpless among the living and the dead.”  Both the living and the dead share in the broken paralysis of war that transforms men into “myriads of broken reeds all still and stiff.”

What is amazing is the beauty that is found in this poem of despair: there is blessing and cleansing in the “wild rain,” and the repetition of the word “rain” and “rains” in the line “Blessed are the dead that the rain rains upon,” gives the poem an incantatory sense.  There is peace here even in the face of wild rain, a peace that comes from the love which is left, the love of death.  In this way, the poem recalls Keats’ “Ode to a Nightingale” and its lines, “for many a time/I have been half in love with easeful Death,/....Now more than ever seems it rich to die,/To cease upon the midnight with no pain.” 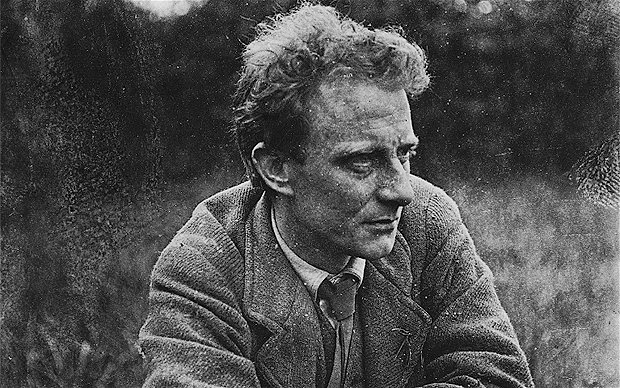 It was Robert Frost who encouraged Thomas to write poetry and who shared his love of countryside rambles.  Frost tried to discourage Thomas from enlisting, and in the early months of the war, Thomas considered emigrating to America with his family to live near the Frosts.  However, in July of 1915, the 37-year-old Thomas decided to enlist in the British Artists Rifles, and “Rain” was written while training in Essex.  Sent to the Western Front in early 1917, Thomas wrote his wife, “It becomes harder for me to think about things at home somehow.  Although this life does not absorb me, I think, yet, I can’t think of anything else.  I don’t hanker after anything.  I don’t miss anything.  I am not even conscious of waiting.  I am just quietly in exile, a sort of half or quarter man.…”

Before the war, Thomas had turned his gaze to the solitary, singular moments in everyday life:

Yes. I remember Adlestrop—
The name, because one afternoon
Of heat the express-train drew up there
Unwontedly. It was late June.

The steam hissed. Someone cleared his throat.
No one left and no one came
On the bare platform. What I saw
Was Adlestrop—only the name

And willows, willow-herb, and grass,
And meadowsweet, and haycocks dry,
No whit less still and lonely fair
Than the high cloudlets in the sky.

And for that minute a blackbird sang
Close by, and round him, mistier,
Farther and farther, all the birds
Of Oxfordshire and Gloucestershire.

Rather than describe the war directly, nearly all of Thomas’s poems explore its effects on men and women through meditations on landscapes and natural scenes.  When asked by a friend on a countryside walk in England, “Do you know what you are fighting for?”, Thomas stopped and picked up a handful of earth and answered, “Literally, for this.” He was killed on the first day of the Battle of Arras, Easter Monday, 1917.
Posted by Connie R. at 5:22 PM

Email ThisBlogThis!Share to TwitterShare to FacebookShare to Pinterest
Labels: Thomas