New Year, Shall I See Your End? 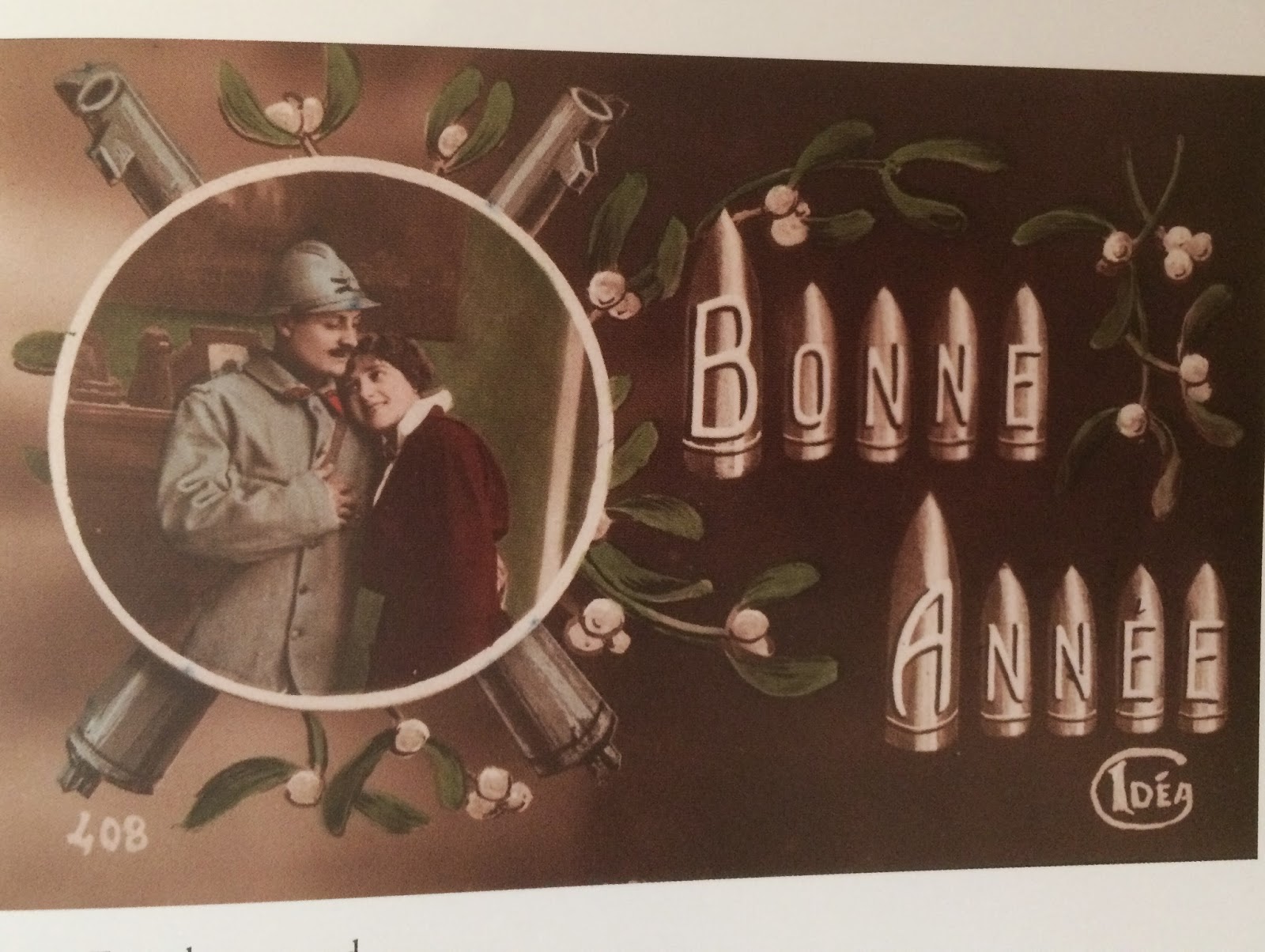 Happy New Year -- Happy War!  That seems to be the message of this French WWI post card, with "Good Year" (the literal translation of the greeting) spelled out over bullets or artillery shells, while  interlocking guns and mistletoe frame the soldier and his sweetheart. 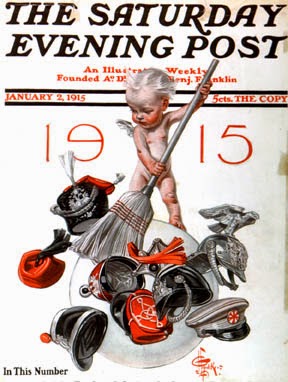 The war that was supposed to be over by Christmas of 1914 was settling in for a long stay. For the French poilu (the nickname for French infantry soldiers, just as the British were Tommies and the Americans doughboys), the war would have terrible costs: it is estimated that by the war’s end, over 70% of French active duty soldiers were casualties of the war (over 1.3 million dead, over 4.25 million wounded).

Jean-Pierre Calloc’h (also known in Breton as Yann Ber Kalloc'h) was twenty-six when he wrote “A Song of Welcome to the New Year.” The title of the excerpt I’ve quoted from can be translated “Come, Holy Spirit!”  It begins by comparing the “blood-face of War” to that of a hungry, resentful beggar pressed against a window, staring into an extravagant ballroom as he watches the self-indulgent “wild dancing.”  Is this the face of the ordinary soldier staring into the glittering world of statesmen and power-hungry rulers?  There is little sense of joyous welcome here for the future, nor in the two similes that follow:  a prophetic, disembodied hand writes of imminent doom at the feast of an ancient Babylonian king, and the moon outshines the sun.  Both signal a world gone terribly wrong.


Veni, Sancte Spiritus!  from A Song of Welcome to the New Year

Now in the one thousand nine hundred and fourteenth year after Christ was born in the stable;
Like the Poor man’s face all at once against the windows of the worldly rich at their wild dancing;
Like the three words on the wall, when Belshazzar made his great feast;
Like a moon of grief and terror, blinding each day’s sun with its savage splendour,
Over every contemptible horizon of the Strumpet Europe,
The blood-face of War!
And before that terrible Star every star fell back, cast into the depths of night;
And all works ceased, until the Great Work should be wrought;
And men fixed their eyes upon fields of carnage, the place of celebration of a great Mystery, a transcendental Sacrifice,
The Mass whose celebrant is Fire, its unexampled music the gun, the Mass whose victim they call the son of man.

I sleep no more.  There is a voice, in the winter night, calling to me, a strange voice;
A strong voice, and harsh, a voice accustomed to command: such a voice rings agreeably in young men’s ears;
(And it is no woman’s voice, nor that mermaid voice that haunts the Celtic sea);
A voice that none can disobey: War, howling at the frontiers.
I will obey.  Soon I shall be with my brothers, a soldier following soldiers.
Soon I shall be among the slaughter…What signs are on my brow?  New year, shall I see your end?
But it is of no account! Sooner, or later, when the hour to approach the Father sounds,
I shall go with gladness.  Jesus shall comfort our mothers.
Be blessed, new year, even should, among your three hundred and sixty-five days, there be my last!....
New year, year of war!  Be blessed, even should you
bring, wrapped in the folds of your cloak, next to springtime for the world, death for me.
--Jean-Pierre Calloc'h (Yann Ber Kalloch), translated by Ian Higgins


The new year that this French soldier welcomes in 1915 is not heralded with merry song:  instead, like a ravenous beast intent on devouring all before it, war “howls at the frontiers.”  Here are no  amorous meetings with sweethearts under the mistletoe, but rather men who go to meet their brothers “upon fields of carnage.”

And yet….this poem does welcomes the new year and invites the Spirit of God to join in marking a new beginning. Calloc’h’s poem recognizes the suffering that is to come and still names the field of tragedy as “the place of celebration of a great Mystery, a transcendental Sacrifice.”  Even the valley of the shadow of death can be welcomed if he walks there with his Father God.  What is easily dismissed today as naïve superstition was for Calloc’h a bedrock of belief that allowed him to say, “I shall go with gladness.”