Song of the Mud

While few have heard of Mary Borden -- a nurse, memoirist, and poet of the First World War --  the mud she writes about is one of the most iconic images of the war.  Born in Chicago, Borden graduated from Vassar and married a Scotsman.  When he joined the British army in 1914, she volunteered her services with the Red Cross and was working in a military hospital in Belgium by January of 1915, despite having three children (the youngest who had been born in November).


In a series of haunting and richly descriptive short vignettes, she writes of her hospital work in Belgium and on the Somme (where the hospital was so close to the front lines that it was in bombarded by artillery fire).

She attempted to publish her writing as a short memoir titled The Forbidden Zone in 1917, but British authorities censored the book and halted publication, concerned that it would damage morale.  The Forbidden Zone was finally published in 1929.  Borden explained that the book's fragmentary quality was her attempt to reflect the brokenness of the war experience.  The Forbidden Zone is one of my favorite memoirs of all time -- beautiful, haunting, and unforgettable. In the vignette “Belgium,” Borden writes, “Mud: and a thin rain coming down to make more mud.  Mud:  with scraps of iron lying in it and the straggling fragments of a nation, lolling, hanging about in the mud on the edge of disaster.”

Paul Fussell in The Great War and Modern Memory provides soldiers’ accounts of the mud:  Wilfred Owen wrote to his mother from his posting at the Somme in early 1917, “The waders are of course indispensable.  In 2 ½ miles of trench which I waded yesterday there was not one inch of dry ground.  There is a mean depth of two feet of water.” Another soldier wrote in his diary, “Water knee deep and up to the waist in places.  Rumors of being relieved by the Grand Fleet” (48).   Borden’s poem "Song of the Mud" communicates the sights, sounds, smells, and agonies of that morass.

It is a wonderful poem for reading out loud – the words “feel good in the mouth.”  In the tradition of Walt Whitman and his poem “Song of Myself,” Borden’s “Song of the Mud” strings together phrases that repeat, getting stuck and unstuck as they vividly paint shifting scenes:  the sodden lanes, the sunken trenches, and the sludge of No Man’s Land, viewed from different angles and perspectives.


The Song of the Mud

This is the song of the mud,
The pale yellow glistening mud that covers the hills like satin;
The grey gleaming silvery mud that is spread like enamel over the valleys;
The frothing, squirting, spurting, liquid mud that gurgles along the road beds;
The thick elastic mud that is kneaded and pounded and squeezed under the hoofs of the horses;
The invincible, inexhaustible mud of the war zone.
This is the song of the mud, the uniform of the poilu.
His coat is of mud, his great dragging flapping coat, that is too big for him and too heavy;
His coat that once was blue and now is grey and stiff with the mud that cakes to it.
This is the mud that clothes him. His trousers and boots are of mud,
And his skin is of mud;
And there is mud in his beard.
His head is crowned with a helmet of mud.
He wears it well.
He wears it as a king wears the ermine that bores him.
He has set a new style in clothing;
He has introduced the chic of mud.
This is the song of the mud that wriggles its way into battle.
The impertinent, the intrusive, the ubiquitous, the unwelcome,
The slimy inveterate nuisance,
That fills the trenches,
That mixes in with the food of the soldiers,
That spoils the working of motors and crawls into their secret parts,
That spreads itself over the guns,
That sucks the guns down and holds them fast in its slimy voluminous lips,
That has no respect for destruction and muzzles the bursting shells;
And slowly, softly, easily,
Soaks up the fire, the noise; soaks up the energy and the courage;
Soaks up the power of armies;
Soaks up the battle.
Just soaks it up and thus stops it.
This is the hymn of mud –  the obscene, the filthy, the putrid,
The vast liquid grave of our armies. It has drowned our men.
Its monstrous distended belly reeks with the undigested dead.
Our men have gone into it, sinking slowly, and struggling and slowly disappearing.
Our fine men, our brave, strong, young men;
Our glowing red, shouting, brawny men.
Slowly, inch by inch, they have gone down into it,
Into its darkness, its thickness, its silence.
Slowly, irresistibly, it drew them down, sucked them down,
And they were drowned in thick, bitter, heaving mud.
Now it hides them, Oh, so many of them!
Under its smooth glistening surface it is hiding them blandly.
There is not a trace of them.
There is no mark where they went down.
The mute enormous mouth of the mud has closed over them.
This is the song of the mud,
The beautiful glistening golden mud that covers the hills like satin;
The mysterious gleaming silvery mud that is spread like enamel over the valleys.
Mud, the disguise of the war zone;
Mud, the mantle of battles;
Mud, the smooth fluid grave of our soldiers:
This is the song of the mud. 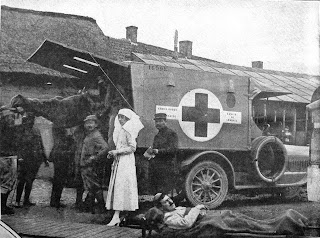 Yet this is the “disguise of the war zone,” for beneath the surface, the mud is a sinister devourer, with “slimy voluminous lips,” a “mute enormous mouth” and a “monstrous distended belly.”  This is the stuff of nightmares.

There is a dark humor in the poem (the soldiers have “introduced the chic of the mud” as it clings to their hair, their clothing, their bodies), but the poem's somber message is much like Wilfred Owen’s in “Dulce et Decorum Est.” Beauty and glory are the mythical appearances of the war, but just underneath the surface of these lies and disguises are suffering,  nightmares, and futile deaths.
Posted by Connie R. at 7:31 PM