Napoleon and Frederick the Great are both credited with saying, “An army marches on its stomach,” but commanders of the First World War recognized that soldiers’ feet were just as critical to military success. Trench foot was a serious problem, and men were advised to change their socks twice a day to avoid the painful, debilitating condition. Some reports suggest that a pair of socks lasted only two weeks when on active duty.* In the first months of the war, British commander Lord Kitchener requested the help of Queen Mary in enlisting volunteers to produce at least 300,000 pairs of socks for the troops, and by war’s end over 15 million handmade items had been supplied.**

Those who volunteered were encouraged to go about their work with cheerful optimism, for women’s emotional energies were believed to “permeate the very articles made, handled and packed.”*** Homemade garments were more than items of clothing: they were charmed talismans sent from the home front to the war: “What prayers are knitted into the socks, what hopes stitched into the pyjamas.”****

In his essay “The Unknown Sock Knitter,” Bruce Scates praises the work of those who crafted items for soldiers and sailors during the Great War: “This emotional labour is not something money can buy—it is a product of unpaid work, a thing freely given.”†

The actual work of knitting could be tedious: it would take at least one day of uninterrupted knitting (“without life interfering”) to make a single, grey sock.†† But knitting was one way in which women could display their patriotism, and the very act of knitting also helped to manage anxiety, grief, and the frustrating loss of control that was a regular part of life during wartime.

Shining pins that dart and click
In the fireside’s sheltered peace
Check the thoughts that cluster thick
20 plain and then decrease.

He was brave—well, so was I—
Keen and merry, but his lip
Quivered when he said good-bye—
Purl the seam-stitch, purl and slip.

Hark! The paper boys again!
Wish that shout could be suppressed;
Keeps one always on the strain—
Knit off 9, and slip the rest.

Researcher Jan Montefiore argues that much of women’s war poetry reflects “the extent to which their writers seem trapped…. living through a horrifying War whose course they are powerless to affect, often racked with anxiety about men they love but are powerless to help,” women who are “trapped not only in anxiety but in the drably unheroic existence of wartime civilians.”††† Knitting may have provided some hope and comfort.

Recent research has found that knitting is characterized by “movements that are bilateral, rhythmic, repetitive, and automatic…. [and that] engage more brain capacity than unilateral ones and appear to facilitate a meditative-like state more readily than unilateral movements.” As well, evidence from animals has found “that repetitive movements …. enhance the release of serotonin.”†††† In research surveys, knitters report that knitting helps them to “forget problems” or “work things out,” and that it often serves as a “defence against anxiety” or as a means of “coping with their pain.”° 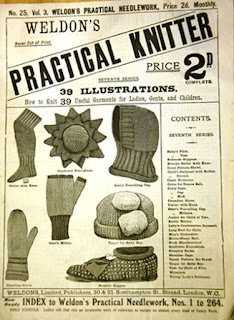 In her day, Jessie Pope, the author of “Socks,” was popular for her lighthearted comic verse; she contributed over 170 poems to Punch between 1902 and 1922.°° Today, Pope is more commonly known as the target of Wilfred Owen’s sardonic criticism, as evidenced in his derisive dedication to her in early drafts of “Dulce et Decorum Est.” But as Jane Potter argues in “A Certain Poetess,” “Like many voices from the Great War, Jessie Pope’s voice creates a more complex and interesting alternate space. Her writing problematizes our view of war as a useless waste, at least for those experiencing it at the time, a great many of whom welcomed the kind of humourous, witty, and simple escape from the cataclysm.”°°°

During the First World War, women were encouraged and expected to remain positive and cheerful, and knitters were praised for the prayers and optimism that they invested in the socks they made. Those who harboured negative thoughts may have felt the need to repress their despair for fear it would infect the garments they were sending to the front.