A Grave in Flanders

Frederick George Scott was serving as a chaplain with the First Canadian Division in France when he learned of the death of his twenty-four-year-old son Henry, killed in October 1916 while leading an attack on enemy lines near Albert. After the chaos of battle, Henry’s body had been hastily buried between the lines, but could not be recovered. In late November 1916, the fifty-five-year-old chaplain set out to find his son’s remains and rebury them.

Frederick George Scott, known as the poet of the Laurentians, was an Anglican priest before the war. He volunteered as an Army Chaplain in August 1914 and recalled his thoughts when he stood in the pulpit that same Sunday: “When I was preaching at the service and looked down at the congregation, I had a queer feeling that some mysterious power was dragging me into a whirlpool, and the ordinary life around me and the things that were so dear to me had already begun to fade away.”*

Canon Scott was an atypical military chaplain, choosing to serve not near field hospitals at the rear, but instead near the front. Others report that he was “Always in the thick of the fighting, bearing almost a charmed life, ignoring any suggestion that he should be posted to a softer job ‘further back.’”** Perhaps because of his own sons’ war service (two of his sons were with the Canadians at the Western Front), Scott “made a habit of spending time with his men on the front lines, giving last rites to the dying. He often courted death to be with the soldiers, whom he saw as ‘his boys.’ Though he was commissioned as a major, he frequently went in the trenches wearing a private’s uniform with his clerical collar so as to mingle with the men more freely.”***

The wood [Ploegsteert] in those days was a very pleasant place to wander through. Anything that reminded us of the free life of nature acted as a tonic to the nerves, and the little paths among the trees which whispered overhead in the summer breezes made one imagine that one was wandering through the forests in Canada. In the wood were several cemeteries kept by different units, very neatly laid out and carefully fenced in. I met an officer one day who told me he was going up to the trenches one evening past a cemetery in the wood, when he heard the sound of someone sobbing. He looked into the place and there saw a young boy lying beside a newly made grave. He went in and spoke to him and the boy seemed confused that he had been discovered in his sorrow. “It’s the grave of my brother, Sir,” he said, “He was buried here this afternoon and now I have got to go back to the line without him.” The lad dried his eyes, shouldered his rifle and went through the woodland path up to the trenches. No one would know again the inner sorrow that had darkened his life. ****

It is likely this account that contributed to inspiring Scott’s poem “A Grave in Flanders.”

A Grave in Flanders†

All night the tall trees over-head
Are whispering to the stars;
Their roots are wrapped about the dead
And hide the hideous scars.

The tide of war goes rolling by,
The legions sweep along;
And daily in the summer sky
The birds will sing their song.

No place is this for human tears,
The time for tears is done;
Transfigured in these awful years,
The two worlds blend in one.

This boy had visions while in life
Of stars on distant skies;
So death came in the midst of strife
A sudden, glad surprise.

He found the songs for which he yearned
Hopes that had mocked desire;
His heart is resting now which burned
With such consuming fire.

So down the ringing road we pass,
And leave him where he fell,
The guardian trees, the waving grass,
The birds will love him well.
—Frederick George Scott, 1st Canadian Division, BEF

Nature guarded the dead just as it brought solace to the living. Scott recalls a night spent ministering to the wounded in a sunken trench near Courcelette in late September 1916:

The stars were always a great comfort to me. Above the gun-flashes or the bursting of shells and shrapnel, they would stand out calm and clear, twinkling just as merrily as I have seen them do on many a pleasant sleigh-drive in Canada. I had seen Orion for the first time that year, rising over the broken Cathedral at Albert. I always felt when he arrived for his winter visit to the sky, that he came as an old friend, and was waiting like us for the wretched war to end.††

Just weeks later, Scott received word that one of his sons had died in battle. His memoir records his visit to the 87th Battalion shortly after to learn the details: 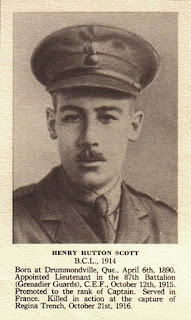 When the battalion was relieved the dead had to be left unburied, but several men volunteered to go and get my son’s body. This I would not hear of, for the fighting was still severe, and I did not believe in living men risking their lives to bring out the dead. I looked far over into the murky distance, where I saw long ridges of brown land, now wet with a drizzling rain, and thought how gloriously consecrated was that soil, and how worthy to be the last resting place of those who had died for their country. Resolving to come back later on when things were quieter, and make my final search, I bid good-bye to the officers and men of the battalion and was motored back to my Headquarters.”†††

Scott was able to return to the area near Regina Trench over a month later in mid-November, and with a runner, he found a cross marking his son’s grave. They began to dig until they exposed a hand wearing Henry’s signet ring. Removing the ring, the chaplain read the burial service, then “made a small mound where the body lay, and then by quick dashes from shell hole to shell hole we got back at last to the communication trench…. It was a strange scene of desolation, for the November rains had made the battle fields a dreary, sodden waste.”° A working party brought Henry Hutton Scott’s remains back behind the lines on Nov. 24. His father was there as they

laid my dear boy to rest in the little cemetery on Tara Hill …. I was thankful to have been able to have him buried in a place which is known and can be visited .… In June of the following year, when the Germans had retired after our victory at Vimy Ridge, I paid one more visit to Regina Trench. The early summer had clothed the waste land in fresh and living green. Larks were singing gaily in the sunny sky. No sound of shell or gun disturbed the whisper of the breeze as it passed over the sweet-smelling fields. Even the trenches were filling up and Mother Nature was trying to hide the cruel wounds which the war had made upon her loving breast. One could hardly recall the visions of gloom and darkness which had once shrouded that scene of battle. In the healing process of time all mortal agonies, thank God, will finally be obliterated.°°