Recovering in hospital from a war wound, Canadian soldier Tom Johnson wrote to his sweetheart,
What an awful job you will have to make me into a dignified Methodist minister. For the last two days two nurses have had to make a savage attack on me & my bed to get “that Canadian” out before 7 am. But today I routed the enemy who had brought up a bowl of water to sprinkle on me, by upsetting it in their hands with a crutch I had secreted under my bedclothes in case of a raid at dawn. The man in the next bed & I won a complete victory this time - they said it was “just like those Canadians.”*

Though he may have teased the nurses, Johnson made clear his appreciation for the Canadian sisters at the hospital. Complimenting their readiness to joke and laugh, he writes in the same letter, “I begin to think that the gift of humor is as priceless as the gift of physical courage.”*

Soldiers responded to the deadly seriousness of the war with humor that helped them to endure physical hardship, cope with psychological trauma, and strengthen the bonds of comradeship. In his essay on Canadian soldiers’ humor in the Great War, historian Tim Cook writes,
Comedy and humour allowed for the soldiers to exert some control over their wartime experience….In this war of endurance, laughter was armour, the joke was a crutch, and the song was a shield.  Gentle or jagged, humour was everywhere.”**

Humor even found its way into war poetry. Robert M. Eassie, serving with the Canadian 5th Battalion, published his comic verse in the 1917 volume Odes to Trifles. A review appearing in
The Literary Digest proclaimed that the author “must be the most cheerful man in all the Canadian Expeditionary Forces,” for the “incurable optimist beguiles his time in the trenches by bringing the Nursery Rimes up to date.”† Eassie’s book included twenty-four parodies of children’s rhymes in the section titled “Rhymes from a New Nursery.”  Here are just two examples:

Jack and Bill, they stuck it till
Their knees were under water;
Jack fell down, and said to Bill
Some words he didn’t oughter!

Subverting the idealism of war-time heroics, the first poem laughs not only at the soldier’s obscenity-laden response to the discomforts and indignities of the Western Front, but at the absurdity of moral codes that condemn cursing while promoting killing.  The second poem trivializes terror as it mocks death and dismemberment, the grisly realities of a battle zone littered with unburied and unidentifiable human remains.

Odes to Trifles also included an entire “Alphabet of Limericks.” Though its origins are uncertain, the limerick's humor lies in its treatment of taboo subjects. Robert Eassie's examples delight in exposing wounds in unmentionable places and soldiers’ sexual dalliances; heroism is best left to brave girls.

A
There was a young hero of Aire
Who was hit, but he couldn’t say where,
Till a comrade close by
Said, “Just sit down and try,”
And he did, and he shouted, “It’s there!”

N
There was a brave girl of Nieppe
Who was full of sand, ginger, and pep;
With Taube or Fokker
The Huns couldn’t shock her
And she’d smile when she spotted a Zepp!

O
There was a sweet thing at Olhain
Whose kisses were hard to obtain;
But, once they were snatched,
They couldn’t be matched
From the Salient down to the Aisne.

V
There was a young fellow of Vimy
Who said, “If my sweetheart could see me
Accepting the kisses
Of these here French misses,
I guess I would rather not be me!”

Cook's discussion of Canadian First World War humor argues, “Antiheroic jokes were among the most transgressive forms of humour as they seemingly undermined the patriotic and heroic discourse of the war,” as well as allowing soldiers to “distance themselves from those at home, and reinforce the bonds that strengthened their own insulated society.”° Perhaps the most shockingly transgressive act, however, was responding to the war and its carnage with laughter. The satirical cartoons of Bruce Bairnsfather, immensely popular with the soldiers of the Great War, were initially criticized by many on the home front, including a member of the British Parliament who condemned them as “vulgar caricatures of our heroes.” 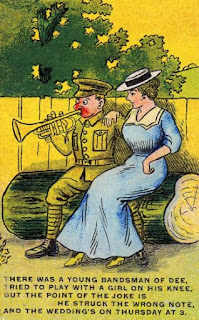