In early January of 1917, a second lieutenant of the Welch Regiment wrote to a friend about the precarious mental state that, together with his wounds, had landed him in a Red Cross Hospital in Rouen:
I am as stupid as an owl & all night I lie awake & perceive the ward full of Huns of forbidding aspect—except when they give me a sleeping draft. I am in short rather ill still & sometimes doubt my own sanity—indeed, quite frequently I do. I suppose that, really, the Somme was a pretty severe ordeal, though I wasn’t conscious of it at the time. Now, however, I find myself suddenly waking up in a hell of a funk—& going on being in a hell of a funk till morning. And that is pretty well the condition of a number of men here. I wonder what the effect of it will be on us all, after the war—& on national life and the like.‡
Just two days later, the soldier, Ford Madox Hueffer (who would later change his name to Ford Madox Ford), wrote “One’s Day’s List,” a poem that tries to make sense of the death of friends, his own survival, and the incomprehensibility of war itself.

My dears …
The rain drips down on Rouen Town
The leaves drip down
And so the mud
Turns orange brown ….
A Zeppelin, we read, has been brought down.
And the obscure brown
Populace of London town 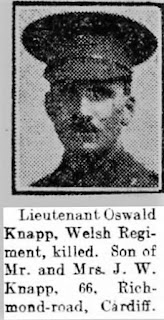 Make a shout of it,
Clamouring for blood
And reductions in the price of food …
But you – at least – are out of it ….

Poor little Arnott—poor little lad …
And poor old Knapp,
Of whom once I borrowed a map—and never returned it.
And Morris and Jones … and all the rest of the Welch,
So many gone in the twenty-four hours of a day …
One wonders how one can stay…
One wonders ….
For the papers are full of Kelch,
Finding rubbishy news to make a shout of it,
But you at least are out of it.

One wonders how you died …
The mine thunders
Still where you stuck by Welch Alley and turned it ….
The mine thunders
Upwards—and branches of trees, mud, and stone,
Skulls, limbs, rats, thistles, the clips
Of cartridges, beef tines and wire
Belch
To the heavens in fire 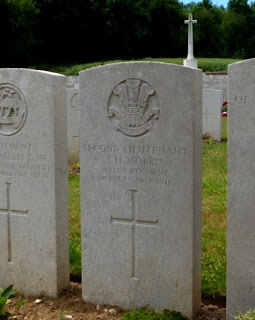 From the lips
Of the craters where doubtless you died,
With the Cheshires and Wiltshires and Welch
Side by side.

One wonders why you died,
Why were we in it? …
At home we were late on parades,
Seldom there to the minute,
When “B.” were out on Cathays
We didn't get much of the lectures into the brain ….
We talked a good deal about girls.
We could all tell a story
At something past something, Ack Emma!

But why?  Why?  Why were we there from the Aisne to Mametz,
Well—there's a dilemma ….
For we never talked of glory,
We each thought a lot of one girl,
And waited most days for hours in the rain
Till she came: 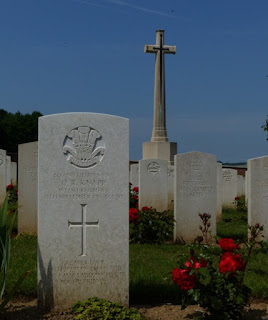 But we never talked of Fame ….

It is very difficult to believe
You need never again
Put in for week-end leave,
Or get vouchers for the 1.10 train
From Cardiff to London ….
But so much has the Hun done
In the way of achievements.

And when I think of all the bereavements
Of your mothers and fathers and sweethearts and wives and homes in the West,
And the paths between the willows waiting for your tread,
And the white pillows
Waiting each for a head,
Well … they may go to rest!

And, God help me, if you meet a Hun
In Heaven, I bet you will say, “Well done,
You fought like mad lions in nets
Down by Mametz.”

But we who remain shall grow old,
We shall know the cold
Of cheerless
Winter and the rain of Autumn and the sting 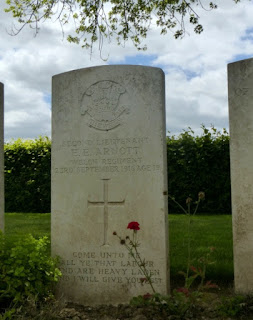 Of poverty, of love despised and of disgraces,
And mirrors showing stained and ageing faces,
And the long ranges of comfortless years
And the long gamut of human fears ….
But, for you, it shall be forever spring,
And only you shall be forever fearless,
And only you have white, straight, tireless limbs,
And only you, where the water-lily swims
Shall walk along the pathways, thro’ the willows
Of your west.
You who went West,
And only you on silvery twilight pillows
Shall take your rest
In the soft sweet glooms
Of twilight rooms ….
No. 2 Red Cross Hospital,
Rouen, 7/1/17
—Ford Madox Ford

The poem echoes Binyon’s “For the Fallen” (published in September of 1914), asserting that those who are left will “grow old.” But while Binyon’s poem creates a fellowship of purposeful tribute (“We will remember them”), Ford imagines a bleak and cheerless future for Great War survivors. The only certain comfort in the deaths of the young Welch soldiers is that they escaped the mud and misery: “at least you are out of it.” But so much else is uncertain: Why did some men survive? How did others die? For what purpose did they fall? Why were they fighting? And what unkind fate assigned the Welch Regiment to hold the line from the Aisne to Mametz in the late summer and early fall of 1916?

Ford grieved to read in the Casualty List the names of men he knew, liked, and admired. Here are their stories:
E.E. Arnott: Euan Edward Arnott was the eldest son of Mrs. Mary Morgan from Garth in Monmouth (his mother had remarried after his father’s death). Euan attended Christ College, Brecon, where he was known for his athletic abilities (playing football, cricket, and hockey) and his “frank, good natured comradeship.” With his friend Edward Trevor Akrill Jones, the two young boys “desperate to enlist … left school during the cricket season of 1915—shortly after their sixteenth birthdays.”* He died of wounds on September 23, 1916 and is buried at Warlencourt. His mother chose the grave inscription, “Come unto me all ye that labour and are heavy laden and I will give you rest,” and his name appears on the war memorial at St. Mary’s Priory Church in Monmouth. 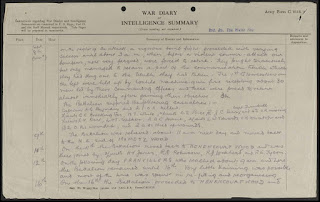 O.R. Knapp: Oswald Reed Knapp was a Freemason and the son of James and Emily Knapp of Roath, Cardiff.  According to the Regimental War diary, Oswald was wounded at High Wood on September 8th: “a vigorous bomb fight proceeded with varying success until about 3 a.m., when, before a violent counter-attack our bombers, now very fatigued, were forced to retire. They fought tenaciously but only managed to retain a part of the communication trench which they had dug out to the trench they had taken.”** He died five days later on September 13, 1916. He is buried at Heilly Station Cemetery; his grave inscription reads, “Greater Love Hath No Man Than This That A Man Lay Down His Life For His Friends.”

JH Morris: John Herbert Morris was the youngest son of Watkin and Elizabeth Morris of Cwmavon, Glamorgan and had attended Llandovery College. He served first with the 20th Battalion Royal Welsh Fusiliers and was transferred to the 6th Bn, where his unit was used “to clear the battlefields after the July battles on the Somme, and then to dig forward and communication trenches when the line moved forward.”†  He was twenty-five years old when killed Sept. 21, 1916 (or 22nd) and is buried at Flatiron Copse Cemetery. The notice of his death in the Mid-Glamorgan Herald and Neath Gazette reported that he “was very popular and well beloved by all in the village. His father is churchwarden of All Saints’, Cwmavon, and had he lived Lieut. Morris would have succeeded his father in these duties.”†† 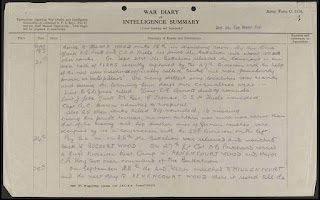 EBD Jones: Neither the Commonwealth War Graves Commission nor the Imperial War Museum’s Lives of the First World War have any record of a second lieutenant with these initials. However, it is highly probable that Ford was remembering B.G.D. Jones, who was killed on the same day as Euan Arnott and whose name appears on the same casualty list as Arnott and Morris (2 Oct. 1916 London Telegraph). Basil Gordon Dawes Jones was the son of William and Emily Jones of Worthing.  Born into a military family (his father was a Colonel in the Indian Army), Basil had attended the British military school at Sandhurst. According to the Sulhamstead Parish Magazine, he “was severely wounded in the second battle of Ypres in 1915, and was taken to Lady Carnarvon’s Hospital for wounded officers at Highclere Castle [the setting used for Downton Abbey], where he remained nearly four months. He only recovered sufficiently to return to the front at the beginning of this year, and had not since been home on leave. He was only 19 years of age when he was killed.”††† He was awarded a Military Cross and commended for “fine work in the front line trenches in command of machine guns under very heavy shell fire. He repeatedly made his way through heavy barrages to ensure the good work of his guns.” His regiment’s military diary reports his death on September 21, 1916; however, the Commonwealth War Grave Commission lists his death as occurring on October 23, 1916.  Basil’s body was never recovered: is it possible that men in his unit witnessed his death, but that in the fierce shelling described in the war diary, his body could not be recovered, thus delaying official confirmation? Basil’s name is listed on the British memorial to the missing at Thiepval and also appears on a private memorial in St. Mary’s Church, Goring-by-Sea, Sussex.
-----------------------------------------------------------------------------------------------------
‡ Ford Madox Ford, Letters of Ford Madox Ford, edited by Richard Ludwig, Princeton UP, 2015, p. 82.
* The Breconian, vol. IX, no. 6, Dec. 1916 (p. 170 includes a poem dedicated to him) and “Remembrance Dispatch 39 Edward Trevor Akrill Jones,” Christ College Brecon.
** “Second Lieutenant Oswald Reed Knapp,” 2nd Bn Welch Regiment War Diary, 8 Sept. 1916, Lives of the First World War.
† “John Herbert Morris,” Llandovery College War Memorial.
†† “Scroll of Fame,” Mid-Glamorgan Herald and Neath Gazette, Saturday, September 30, 1916.
††† “Gallant work with Lewis guns,” Berkshire at War, quoting from the Sulhamstead Parish Magazine, Nov. 1916, https://berkshirevoiceswwi.wordpress.com/tag/parsons/.
Posted by Connie R. at 9:34 PM

Email ThisBlogThis!Share to TwitterShare to FacebookShare to Pinterest
Labels: Ford