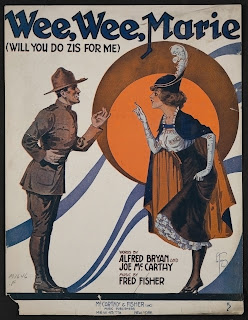 In late spring of 1918, as thousands of A.E.F. doughboys were arriving in France, an article in the American military newspaper The Stars and Stripes offered “An Earful of Suggestions for Boys Back Home.” One suggestion advised those headed “Over There,”
Throw away your ‘parley-voo’ books and forget all the French the Y.M. has been teaching you in your cantonment huts this winter.  You won’t need it.  “We have the natives so well acquainted with United States now that they understand everything we say—even when we get unduly accurate on one another’s ancestry.  Even if you do get stuck, there’s only one way to learn French—that is to talk it, and make it up as you go along.  In the course of time you’ll get at least half of what you want.”*

Charles (“Chick”) Divine “the babbling Rupert Brooke of the New York Division, [who] slings as hot a sonnet as anybody,”** was a newspaper reporter on The New York Sun before the war.
Divine recalled his efforts to join the army after war was declared: 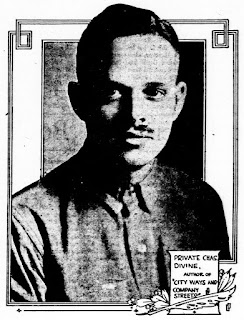 Trying to enlist and being rejected twice for underweight, wondering, fatuously, what to do next.  Hegira to Binghamton.  Cottage by the river.  Lots of sleep and rustic diet.  Gained weight.  Appearing at the Binghamton armory for another physical examination.  First drinking many quarts of water. Passed examination!***
Combining self-deprecating humor with a bit of swagger, Divine’s verse and comical essays were enormously popular, and the New York Sun praised his collection of war poetry as “the Happiest Verse of America at War.”†  Other reviews praised City Ways and Company Streets for capturing “the real spirit of the American citizen soldier,”†† while the writer himself was described as “a sort of camp Kipling; he is sometimes grave, sometimes gay, but always cheerful.”†††

It’s worth considering the ways in which Divine’s poetry both reflected and shaped  Americans’ sense of their identity and their attitudes towards the war. Americans wanted a quick and easy victory, and so they welcomed the “Happiest Verse of America at War.” The Cornell Alumni News said of the former student, “Divine is a true poet.  He never tries to write what he hasn’t seen or felt. He never poses. He is no rhapsodist. In the sincere work of such as he, in the broadening and deepening of their experience and the increase of their delineative skill, lies the immediate hope of American poetry.  England has had great and living verse out of this tragic war; we should have it too.  From three thousand miles away, it will come to us, celebrating in fit and memorable measures the part we are taking in the effort to save the freedom we have always died for.”§

Serving in France, Divine wrote of the language battles doughboys waged behind the front lines; the following poem was published in The Stars and Stripes in late October of 1918.

I can count my francs and santeems—
If I’ve got a basket near—
An’ I speak a wicked “bon jour,”
But the verbs are awful queer.
An’ I lose a lot o’ pronouns
When I try to talk to you, 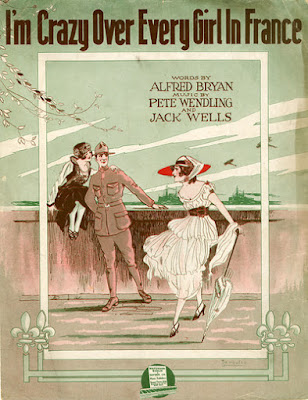 For your eyes are so bewitchin’

I forget to parlay voo.

In your pretty little garden,
With the bench beside the wall,
An’ the sunshine on the asters,
An’ the purple phlox so tall,
I should like to whisper secrets
But my language goes askew—
With the second person plural
For the more familiar “too.”

In your pretty little garden
I could always say “juh tame,”
But it ain’t so very subtle,
An’ it ain’t not quite the same
As “You’ve got some dandy earrings,”
Or “Your eyes are nice and brown”—
But my adjectives get manly
Right before a lady noun.

Those infinitives perplex me;
I can say you're “tray jolee,”
But beyond that simple statement
All my tenses don't agree.
I can make the Boche “comprenney”
When I meet ’em in a trench,
But the softer things escape me
When I try to yap in French.

In your pretty little garden
Darn the idioms that dance
On your tongue so sweet and rapid,
Ah, they hold me in a trance!
Though I stutter an’ I stammer,
In your garden, on the bench,
Yet my heart is writin’ poems
When I talk to you in French.
—Charles Divine

Most American soldiers had never left their home states, and many had never encountered any language other than English.  The Soldiers’ French Phrase Book, published in Chicago, offered “a convenient and serviceable aid to the intelligible expression in French of words and phrases.”  Phrases that were deemed useful included translations of the following: 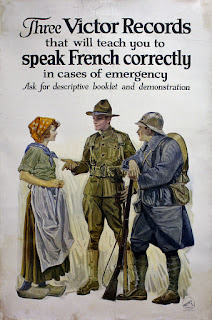 How is your father/mother/wife/husband?
Did you sleep well last night?
He has been wounded in the chest.
A bullet pierced his lips.
Are you telling me the truth?
My sweetheart.
You will always be in my memory.
Please write to me.
Are you fond of flowers?
Do you dance?
She is a doll.

Popular songs of the time such as “Wee, Wee, Marie” and “I’m Crazy Over Every Girl in France” celebrated the romantic inclinations of American soldiers while laughing at their linguistic shortcomings, with lyrics such as,
Young Sammy Brown was a volunteer,
Went off to France like a cavalier,
Sammy learned to say ‘oui oui/ wee wee’
You for me, ‘Ma cherie.’°