In the valley of the shadow of death that was the Great War, soldiers and civilians across Europe found comfort in assuring themselves that God was on their side.  Writing long after the war, British soldier-poet Robert Graves recalled that 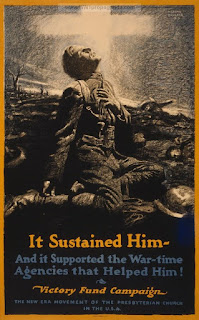 Christ was being evoked alike by the Germans and the Allies for victory in a new sort of total war. This paradox made most of us English soldiers serving in the purgatorial trenches lose all respect for organized Pauline religion, though still feeling a sympathetic reverence for Jesus as our fellow-sufferer. Cross-road Calvaries emphasized this relationship.”*
As evidence of this common connection forged between Christ and soldiers, Graves quotes an excerpt from Wilfred Owen’s poem “At a Calvary near the Ancre”:

One ever hangs where shelled roads part.
In this war He too lost a limb,
But His disciples hide apart;
And now the Soldiers bear with Him.

In his poem “Solomon in All His Glory,” First World War military chaplain Geoffrey Studdert Kennedy likens the “bloody sweaty tatters” of the wounded to “the robes of Jesus Christ,” and Paul Fussell, in The Great War and Modern Memory, writes, “The sacrificial theme, in which each soldier becomes a type of the crucified Christ, is at the heart of countless Great War poems.”**

But perhaps the best-known poem of the war that linked Christ and front-line soldiers was written by a woman on the home front. “Christ in Flanders” was written by Lucy Whitmell, former president of the Leeds Astronomical Society, wife of astronomer Charles Whitmell, and sister of a war nurse.  The poem first appeared in London’s Spectator on September 11th in 1915, and it was reprinted as a leaflet, card, and gospel tract, selling over 50,000 copies.***

And there were always other things to think of —
There’s lots of things a man has got to think of —
His work, his home, his pleasure, and his wife;
And so we only thought of You on Sunday —
Sometimes, perhaps, not even on a Sunday —
Because there’s always lots to fill one’s life.

And, all the while, in street or lane or byway —
In country lane, in city street, or byway —
You walked among us, and we did not see.
Your feet were bleeding as You walked our pavements —
How did we miss Your footprints on our pavements? —
Can there be other folk as blind as we?

Now we remember; over here in Flanders —
(It isn't strange to think of You in Flanders) —
This hideous warfare seems to make things clear.
We never thought about You much in England —
But now that we are far away from England,
We have no doubts, we know that You are here.

You helped us pass the jest along the trenches —
Where, in cold blood, we waited in the trenches —
You touched its ribaldry and made it fine.
You stood beside us in our pain and weakness —
We're glad to think You understand our weakness —
Somehow it seems to help us not to whine.

We think about You kneeling in the Garden —
Ah! God! the agony of that dread Garden —
We know You prayed for us upon the cross.
If anything could make us glad to bear it —
’Twould be the knowledge that You willed to bear it —
Pain — death — the uttermost of human loss.

Contemporary critics have accused the poem of sentimentality, yet “Christ in Flanders” was deeply comforting to many. As literary scholar Amy Helen Bell explains,
Rather than using abstract concepts of Christian spiritual belief, like “glory,” Whitmell imagines how thoughts of Christ help comfort the men in the trenches …. Christ becomes a comrade, a sharer in trench life and its jests.  Though wartime suffering and death is still portrayed as the will of God, it is the will of God humanized, prayed for by a man suffering on his own, personal cross.†

Two years after the poem was first published, the Spectator published another poem, presumably written by a soldier, entitled “To the Writer of ‘Christ in Flanders:’”††

On the battlefields of Flanders men have blessed you in their pain:
For you told us Who was with us, and your words were not in vain.
All you said was very gentle, but we felt you knew our ways;
And we tried to find the Footprints we had missed in other days.
When we found Those blood-stained Footsteps, we have followed to the End;
For we know that only Death can show the features of our Friend.
In the Mansions of the Master, He will make the meaning plain
Of the battlefields of Flanders, of the Crucifix of Pain.
—E.M.V. 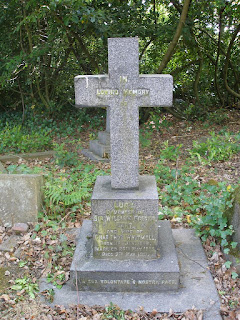