By late June of 1917, the Great War had dragged on for nearly 1,070 days, and there had been more death and suffering than anyone could have imagined when it began in August of 1914.  Great Britain was approaching the first anniversary of the worst day in its military history: one year earlier, on July 1, 1916, the Battle of the Somme began; 19,240 British soldiers were killed on the first day alone.

In late spring of 1917, Voluntary Aid Detachment nurse Vera Brittain resigned from her duties and returned from Malta to nurse Victor Richardson, a close friend of her brother and of her dead fiancé, Roland Leighton. Together, the men were known as "the three Musketeers." Richardson had been blinded and disfigured from wounds received in an attack on Arras on April 9 of 1917; Vera was planning to marry him and serve as his caretaker for life. Before they were wed, his injuries worsened, and Victor Richardson died on June 9, 1917. Brittain’s short poem “Sic Transit” was written shortly after.* 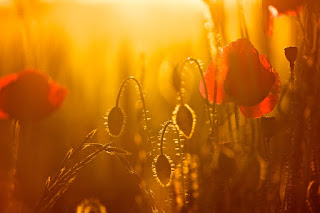 I am so tired.
The dying sun incarnadines the West,
And every window with its gold is fired,
And all I loved the best
Is gone, and every good that I desired
Passes away, an idle hopeless quest;
Even the Highest whereto I aspired
Has vanished with the rest.
I am so tired.
—London, June 1917

The poem’s title alludes to the Latin phrase “Sic transit gloria mundi” (Thus passes the glory of the world), a reference to the fleeting brevity of life. Brittain’s abbreviated poem restricts itself to the use of only two repeated rhymes. While in films and video games, war is often portrayed as an adrenaline rush of action, “Sic Transit” aches with numb exhaustion.

The Great War fed on youth and dreams; it devoured hope and sapped energy. Victor Richardson was twenty-two when he died; Vera Brittain was twenty-three when she found herself mourning the  death of yet another friend killed in battle.  Shortly after learning of Victor’s injuries, she had recorded in her diary, “I no longer expect things to go well for me; I don’t know that I even ask that they shall. All I ask is that I may fulfil my own small weary part in this War in such a way as to be worthy of Them, who die & suffer pain.”**
-------------------------------------------------------
*I am indebted to A Century Back for its insightful commentary on the circumstances surrounding the writing of the poem.
**Chronicle of Youth, excerpt from entry for April 18, 1917.
Posted by Connie R. at 5:04 PM