Pershing at the Front


In 1937, The Saturday Evening Post published a history that noted the magazines most popular poems:
Of the three poems most often asked for, two are serious, Alfred Noyes’ “A Victory Dance” and Arthur Guiterman’s “Pershing at the Front,” the latter printed in 1927. The third is Newman Levy’s burlesque of Hamlet, printed on the humor page in 1923.*
Ironically, “Pershing at the Front,” though one of the American magazine's most-requested poems, was not accurately remembered by the historian of The Saturday Evening Post — it is most certainly not a serious poem.

Pershing at the Front

The General came in a new tin hat
To the shell-torn front where the war was at;
With a faithful Aide at his good right hand
He made his way toward No Man’s Land,
And a tough Top Sergeant there they found,
And a Captain, too, to show them round.

The poem good-naturedly lampoons military hierarchy and protocol. The lowest ranking soldier, the whispering Sergeant, is the man who is most informed about the realities of war in the front-line trenches. Yet when the commander of the American Army visits the front, he is shielded from first-hand knowledge by his faithful Aide and a respectable Captain, who take it upon themselves to translate and repeat everything that the Sergeant says. While it may seem insignificant to the others that the Sergeant has a head-cold, the health of this one man alters the Generals’ – and the others’— understanding of the entire military situation. Because they have not taken the time to learn of the lowly Sergeant’s laryngitis, they interpret his whispers as signaling the close proximity of the German lines. With its last line, the poem mocks the isolation of those in command and their estrangement from the men whom they order into battle.

Why was the poem so popular? Perhaps because it uses humor to make a serious point. High school history teacher Wilbur Kirwan was remembered by a former student as trying to explain the paradox of life and war:
things that seemingly contradict each other – such as humor and horror – can coexist,
which is why as Memorial Day approached each year he [Kirwan] would recite Wilfrid Owen’s haunting Dulce et Decorum Est, followed by Arthur Guiterman’s hilarious Pershing at the Front.***
It’s a fascinating pairing of poems, one that challenges the ways in which we often simplify and stereotype past events and those who experienced them. 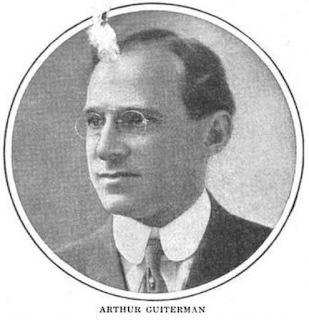