By the Canal in Flanders 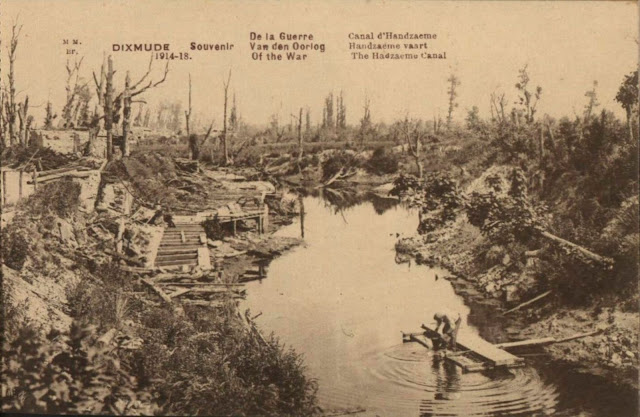 Time seems to move differently during war.  For some, time slows to a crawl while living in the trenches; for others, the anxious tension of waiting for news from the front lines seems to stretch each second into days. Nothing seems to happen – until unimaginable things suddenly occur in a rush and a blur.

In the third year of the war, a British soldier serving with the Royal Engineers wrote comically of his despair at being constantly hurried and harried, rushed and pushed. “By the Canal in Flanders” was published in Punch in 1917* and selected for inclusion in Poems from Punch 1909-1920.** The Preface to the collection explains that the poems “are brought together to represent a larger number which amid much delightful but, as is fitting, ephemeral verse, serve the permanent interest of the Comic Spirit.”† The Preface continues, defining comedy as “life’s victory…. particularly in the front we present to circumstances or events that people quite unmoved by the Comic Spirit might find anything but attractive, except as an occasion for martyrdom or some such hardening of mind.”††

The poem’s author, Captain Henry Norman Davey, arrived in France with the Royal Engineers in September of 1915 and served in France and Flanders until a prolonged period of ill-health sent him back to England in June of 1918.

By the Canal in Flanders

By the canal in Flanders I watched a barge’s prow
Creep slowly past the poplar-trees; and there I made a vow
That when these wars are over and I am home at last
However much I travel I shall not travel fast.
Horses and cars and yachts and planes: I’ve no more use for such:
For in three years of war’s alarms I’ve hurried far too much;
And now I dream of something sure, silent and slow and large;
So when the War is over—why, I mean to buy a barge.

A gilded barge I’ll surely have, the same as Egypt’s Queen,
And it will be the finest barge that ever you have seen;
With polished mast of stout pitch pine, tipped with a ball of gold,
And two green trees in two white tubs placed just abaft the hold.

So when past Pangbourne’s verdant meads, by Cliveden’s mossy stems,
You see a barge all white-and-gold come gliding down the Thames,
With tow-rope spun from coloured silks and snow-white horses three,
Which stop beside your river house—you’ll know the bargee’s me.
I’ll moor my craft beside your lawn; so up and make good cheer!
Pluck me your greenest salads! Draw me your coolest beer!
For I intend to lunch with you and talk an hour or more
Of how we used to hustle in the good old days of war.
—Norman Davey

The wonderfully farcical vision of a gilded barge draped in silks and pulled by snow-white horses contrasts strongly with the mud, filth, and grime of war.  Davey seems to have struggled as a soldier, writing in one of his poems, “for me the ways of war are hard— / An artist and a scholar and a bard.” In Desiderium, MCMXV-MCMXVIII, his volume of poetry published 1920, Davey includes a lengthy poem (“Oi bibliofiloi”) describing the thrill he finds in browsing the dusty bookshops of Charing Cross Road in search of bibliophile treasures.  The last lines (it runs on for 218 lines!) are worth citing, as they show a man who longs for nothing more than to return to the slow companionship of his books, if ever the war should end.  Addressing a friend who has remained in England, Davey writes about his love of books in a way that touches the heart of bibliophiles today:

Ah! Christie, when these woeful wars will cease,
(If cease they ever will) and patient Peace
Permits poor scholars to depart once more
Into the parts they love, out of the roar
And hurry of this world which is not theirs;
Come down with me where San Vitale bears
Her glory to the blue Italian skies;
And you and I with understanding eyes
Shall loiter in her aisles and sculptured crypts
Or search the town for painted manuscripts.
But this is all a dream; and now my books
Are lonely in their shelves, and no one looks
To see what company are gathered there.
Old friend, I pray you, let it be your care
To go into my library and pay
That duty that I owe to friends who stay
So patient in their shelves for my return.
Take them and study them; I know they yearn
For human friendship in the silent hours;
Take them and talk to them—true friend of ours—
And tell them when this calamity
Has passed away, if happily see
My own place once again; no force shall tear
Me from their fellowship; and that I swear,
By all the gods, never again to brook
Aught that shall part the scholar from his book.

Email ThisBlogThis!Share to TwitterShare to FacebookShare to Pinterest
Labels: Davey