Just weeks after war was declared, German mother and artist Käthe Kollwitz wrote in her diary,

A piece by Gabriele Reuter in the Tag on the tasks of women today. She spoke of the joy of sacrificing—a phrase that struck me hard.  Where do all the women who have watched so carefully over the lives of their beloved ones get the heroism to send them to face the cannon? …. Those who now have only small children … seem to me so fortunate. For us, whose sons are going, the vital thread is snapped.*

Kollwitz’s two sons, Hans and Peter, had joined the German army. Peter was killed on October 22, 1914.  Today, Kollwitz is best known for her sculpture Trauerndes Elternpaar (Grieving Parents), a memorial to her son and the sorrow of the war.

In Britain, one of the best-known letters of the war was titled “A Mother’s Answer to ‘A Common Soldier’” and signed simply, “A Little Mother.” Originally printed in August of 1916 in the Morning Post, the letter was reprinted as a pamphlet, and 75,000 copies were sold the first week.  Addressed to “Pacifists,” “the Bereaved,” and “the Trenches,” the letter is written by “a mother of an only child—a son who was early and eager to do his duty” and explains “what the mothers of the British race think of our fighting men.”  The “Little Mother” writes, 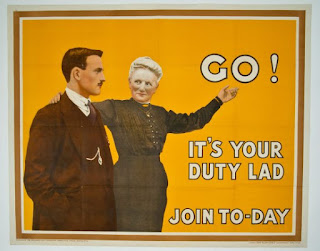 We women pass on the human ammunition of ‘only sons’ to fill up the gaps, so that when the ‘common soldier’ looks back before going ‘over the top’ he may see the women of the British race at his heels, reliable, dependent, uncomplaining…. Women are created for the purpose of giving life, and men to take it.  Now we are giving it in a double sense.**

After the war, British trench poet Robert Graves referred to the letter in his memoir, Goodbye to All That, dismissing it as “newspaper language,” while Jean Bethke Elshtain in Women and War (1987) excoriates the letter for expressing “bloodcurdling patriotism coated in vapid and lifeless pieties.”° At the time, however, the letter was enormously popular, and advertisements for the pamphlet said that the Queen “was deeply touched at the ‘Little Mother’s’ beautiful letter.”

While there are cultural differences, nearly all countries used iconic images of motherhood to recruit soldiers and marshal support for the war. In the flesh, women were more diverse: some were pacifists and protested the war (as evidenced in the American popular song, “I Didn’t Raise my Boy to Be a Soldier”); others joined the labor force, assuming jobs left vacant by men at the front.  Mothers filled the gaps in uniform supply, knitting socks, hats, and mittens for their boys at the front. No matter what their views of the war, millions mourned the death of sons who never returned home. 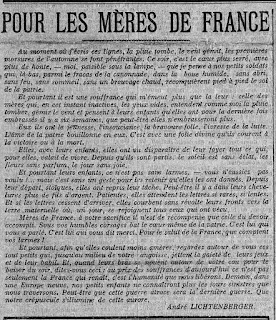 The French tried to boost military morale by matching isolated soldiers with marraines, godmothers who would send letters and gifts.  The scheme was very popular with women old and young, until suspicions arose that the program encouraged immoral romantic relationships.°°
In the article “Mothers, Marraines, and Prostitutes: Morale and Morality in First World War France” Susan R. Grayzel explains,

Women, seen both as a guarantee of and as a potential threat to conventional morality and the social order, were recognized to be the key to keeping up morale. The quality of their morality and maternity would either lead the nation to victory against Germany or to ignominious defeat….At the heart of the wartime construction of the ‘patriote’ was the mother, preferably of many sons.”°°°

In September of 1914, Le Petit Journal published “Pour les Mères de France,” comparing the sacrifice of soldiers at the front with that made by French mothers:

Since their sons left, the sun does not shine, the flowers have lost their scent, the day is without joy…. Mothers of France, for your sacrifice there is no reward except that of the duty accomplished. Under your humble bodices beats the very heart of your son’s country.†

By the war’s end, 1,393,000 soldiers had died for France, an estimated 20% of men under 50 years of age.†† Author Lucie Delarue-Mardrus witnessed the death of countless mothers’ sons as she worked in a French hospital during the First World War.  In her memoir published in 1938, she recalled, “The absurdity of this war, of all wars, seemed to me like that of a vandal who furiously smashes piles of china plates, then dreamily steps back to gaze at the debris with consternation.”§ What did the war mean to the mothers of France?  Delarue-Mardrus provides a disturbing answer in her poem “Regiments.”

All those boys who have left,
These soldiers reared to abominate war,
Were little babies once, held
Snug and swaddled in a mother’s arms.
All a-swagger in steel helmets,
They march towards the crack of flung lightning,
And leave behind that other hell,
The sorry female hell of tears and silence.

Mothers, in your inmost being, deep
Flesh of your flesh, you carried your children;
For you, victory and defeat
Are one: you hold your children’s death a crime.

But I just watch these lads march away,
And think in stupefaction of their birth;
And deep inside myself I say:
‘All these men’s heads have torn women with pain.’
—Lucie Delarue-Mardrus, trans. Ian Higgins

“Boys” – that is how the poem first names the soldiers who depart for battle. Despite their swagger as they march to the front, the poilus remain as children in the eyes of the mothers who watch them leave. The infants who were carried safe in their mothers’ wombs, the babies who were once snug and swaddled in their mothers’ arms, now march toward machine gun fire and bursting artillery shells protected only by steel helmets and bravado.

The poem asserts that in both the birth and the death of their sons, mothers must suffer and accept pain that tears them apart. For these women, victory and defeat are indistinguishable; the death of a child reduces any abstract cause to meaningless irrelevancy.