Sweethearts of the A.E.F. 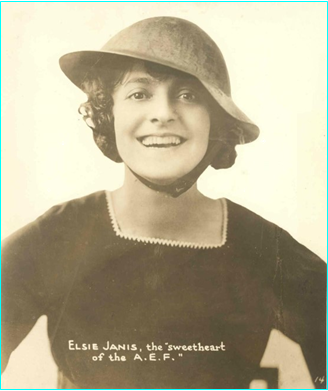 Elsie Janis was a comedian who sang, danced, and cartwheeled her way into the hearts of American soldiers. The “Sweetheart of the A.E.F.” was also one of the most popular American entertainers of the early twentieth century.  Janis visited First World War hospitals and military camps, sharing laughter and music with thousands of doughboys, and by March of 1918 she had already given over 400 performances.*

From her impersonations of Charlie Chaplin to her frequently repeated shout to the troops, ““Do I come from Ohio? By damn yes!” Janis touched her audiences with “an American performance, by an American girl, done in an American way, the first of its kind to be seen by most of the audience in many months.”**

Whether it was Elsie Janis, the women of Belgium, or sweethearts back home, women often gave soldiers the motivation to fight.  The American military newspaper, the Stars and Stripes, championed Janis as “an oasis of color and vivacity in the midst of a dreary desert” proclaiming, “Elsie Janis is as essential to the success of this Army as charge of powder is essential to the success of a shell. More entertainment by her and ‘the likes of her’ and less instruction by people who take themselves seriously—that’s one formula for winning the war!”†

Letters from women back home were equally important to the troops.  One soldier wrote to his sweetheart, “I get a lot of peace thinking about you.  I like to think of the good times we used to have and dream of the good times to come when I get home again.”††

Idealized views of women powerfully influenced the morale of soldiers; Harry L. Parker was a young American lieutenant who saw humor in the situation.

I got a letter from
My girl. She said,
“I love you.
When the mud is
Thick, and
You have a large pack on
Your back
And you are hungry
And tired
Think of me.
I love you.”
And one day we were
On the march.
The mud was
Thick. And
I had a large
Pack
On my back
And I was

Hungry
And tired, when
I fell to thinking
Of her.
And
A lieutenant
Gave me
A swift kick
And set me to
Double timing
To
Catch up.
—Harry L. Parker

The poem’s title evokes the left-right-left of the soldier’s marching cadence, the girl he left behind, and his own lagging pace.  As well, the poem’s uneven line lengths suggest the faltering pace of the man’s attempts to march in step with his company, as they echo his exhaustion and disjointed thoughts. But the awkward line breaks are also what give the poem its whimsical humor. They highlight his sweetheart’s romantic words –“Think of me” and “I love you” – and then contrast these with the grueling realities of war: “Pack” and “Hungry.”

What bridges the gap between the tensions of war and the soldier’s dreams of his girl? An officer’s swift kick to the man’s “left behind” recalls him to his place and sends him double timing to catch up with his unit.  With gently ironic humor, the poem states that individual soldiers are ordered to discard their personal motivations and instead to surrender themselves to the army and its agenda.

Lieutenant H.L Parker (later promoted to Captain) was a doughboy from South Carolina who attended Clemson College, where he was voted “Wittiest” and “Most Original” in his graduating class.  Joining the American Expeditionary Force, he served in the supply department of the Stars and Stripes.  Harry Parker survived the war. In 1924, he earned a doctorate from the University of Paris and began a long and distinguished career as an entomologist and expert in the control of biological pests.