By 1917, the number of Russian soldiers who were injured, dead, missing, or held as prisoners of war was approaching five million men. The situation on the home front was equally bleak: over 400,000 Russian civilians were killed as a result of military action in the First World War, and another 730,000 civilians died due to famine and disease. Three years of horrific death and slaughter had given rise to a national mood of hopeless despair. When the Russian Revolution began on March 8th, 1917, few doubted the central role that the Great War had played in the unrest that led to the eventual overthrow of Russia’s monarchist government.

Anna Akhmatova, one of the foremost Russian poets of the twentieth century, shaped the chaos into poetry. She had written about the start of the war in her poem “In Memoriam, July 19, 1914”: “We aged a hundred years, and it / all happened in an hour.” In the midst of the 1917 revolution, she composed the haunting poem “Now no-one will be listening to songs.” 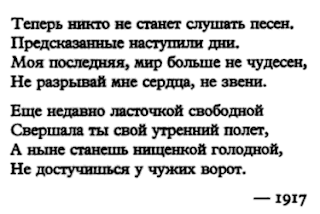 Now no-one will be listening to songs.
The days long prophesied have come to pass.
The world has no more miracles. Don't break
My heart, song, but be still: you are the last.

Not long ago you took your morning flight
With all a swallow's free accomplishment.
Now that you are a hungry beggar-woman,
Don't go knocking at the stranger's gate.
--1917
Translated by D.M. Thomas


Repeated throughout the poem are images of isolation and alienation: the solitary beggar, the stranger who has barred himself behind his gate, the last song, and the loneliness of “no-one.” Even the most desperately needy will find no hospitality or place to shelter, for this is a world bereft of miracles.

The poem recalls a past when music soared like a bird, yet in a new world born out of violence, the “bitter days foretold [have] come over the hill.”* The turbulence of revolution may have created its own discordant noise like nothing heard before – but it is not a song.


Akhmatova’s poem is itself a dirge, bidding a melancholy farewell to the traditional tunes of folklore that have joined communities and connected the past to the present.  Addressing song itself, the poet pleads with it to be silent, for the last surviving melody sings of a past that can never be recovered – and that tune has the power to break the heart.
* This from Stanley Kunitz’s translation of the poem’s second line.