Sing me to sleep 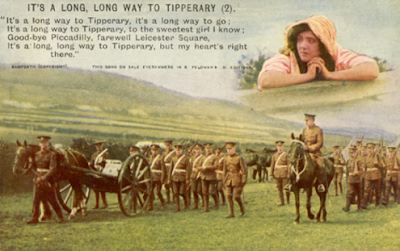 “The Tommy is a singing soldier,” wrote Patrick MacGill in the Preface to his 1917 volume of poetry, Soldier Songs. An Irishman serving with the London Irish Rifles, MacGill continued,

The soldiers have songs of their own, songs of the march, the trench, the billet and battle. Their origin is lost; the songs have arisen like old folktales, spontaneous choruses that voice the moods of a moment and of many moments which are monotonously alike. Most of the verse is of no import; the crowd has no sense of poetic values; it is the singing alone which gives expression to the soldier’s soul.

His poem “A Lament” (sometimes titled “A Lament from the Trenches”) is one such whimsical, melancholy expression. 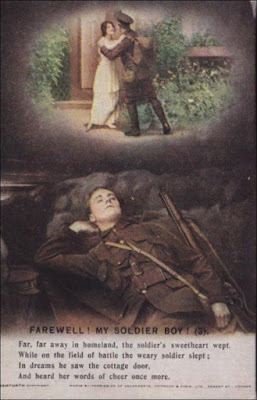 I wish the sea was not so wide
That parts me from my love;
I wish the things men do below
Were known to God above.
I wish that I were back again
In the glens of Donegal,
They’ll call me a coward if I return
But a hero if I fall.

“Is it better to be a living coward,
Or thrice a hero dead?”
“It’s better to go to sleep, m’lad,”
The colour-sergeant said.

Loneliness permeates the poem’s first stanza. As in a tale of folklore and magic, a man makes three wishes, and they reveal a soldier who is heartsick, homesick, and abandoned by God.   Separated from his beloved, detached from a distant God, and impossibly remote from the landscape of his childhood, the soldier is alone with the realization that there is no winning his war.  If he returns to his village, he will be labeled a coward; respect and honour can be achieved only with his death.

Caught on the horns of the dilemma, he turns to his commanding officer and asks whether it is better to live as a coward or die as a hero. The colour-sergeant responds with affection, addressing the young man as “m’lad,” but avoiding the unanswerable question. Instead, with calm and good sense that seem almost paternal,* the sergeant urges the young soldier to take one of the few comforts available in the trenches: to sleep. 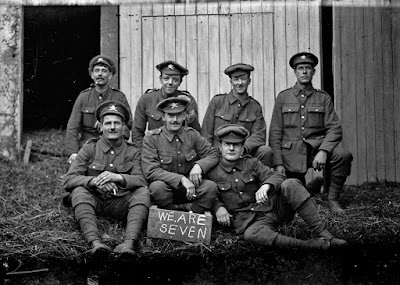 Close bonds of comradeship caused many of the soldiers of the First World War to reflect, without irony, that their experiences in combat were some of the happiest of their lives. Shortly before his death, Wilfred Owen wrote his mother,

So thick is the smoke in this cellar that I can hardly see by a candle 12 inches away.  And so thick are the inmates that I can hardly write for pokes, nudges, and jolts. On my left, the company commander snores on a bench.  It is a great life….I hope you are as warm as I am, soothed in your room as I am here. I am certain you could not be visited by a band of friends half so find as surround us here.

Edgar Jones, in “The Psychology of Killing: The Combat Experience of British Soldiers during the First World War,” asserts, “The intensity of the soldiers’ experience was often so great that it is difficult to imagine anything in civilian life that came anywhere close to these bonds.”

In the Preface to Soldier Songs, Patrick MacGill recalls another lyric that “echoed in billets and dug-outs from Le Harve to the Somme.” It is a lullaby of sorts, a gently ironic reminder of the bonds of comradeship that got men through the war.

Sing Me to Sleep

Sing me to sleep where bullets fall,
Let me forget the war and all;
Damp is my dug-out, cold my feet,
Nothing but bully and biscuits to eat.
Over the sandbag helmets you’ll find 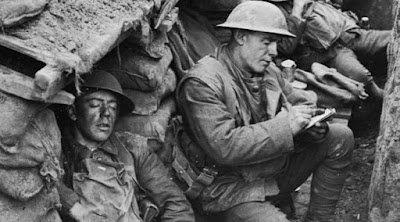 Corpses in front and corpses behind.

Chorus.
Far, far from Ypres I long to be
Where German snipers can’t get at me,
Think of me crouching where the worms creep,
Waiting for the sergeant to sing me to sleep.