One of the common myths of the First World War is that nearly all women were strong supporters of the conflict. Contributing to the misunderstanding is the fact that one of the best-known female war poets is Jessie Pope.  A BBC Magazine article has described Pope as “the villain of the war” and “the war poet students love to hate.”  Her often-studied poem, “Who’s for the Game,” encourages men to join the army as it chides, “Who would much rather come back with a crutch/Than lie low and be out of the fun?”*

Yet while there were women writers who supported the war, many others did not. Nosheen Khan, in Women’s Poetry of the First World War, observes that “women were writing protest poetry before Sassoon and Owen” (15). The poem that prompts Khan’s assertion is Ruth Comfort Mitchell’s “He Went for a Soldier,” published in 1916.

He Went for a Soldier

He marched away with a blithe young score of him
With the first volunteers,
Clear-eyed and clean and sound to the core of him,
Blushing under the cheers.
They were fine, new flags that swung a-flying there,
Oh, the pretty girls he glimpsed a-crying there,
Pelting him with pinks and with roses --
Billy, the Soldier Boy!

Not very clear in the kind young heart of him
What the fuss was about,
But the flowers and the flags seemed part of him --
The music drowned his doubt.
It's a fine, brave sight they were a-coming there
To the gay, bold tune they kept a-drumming there,
While the boasting fifes shrilled jauntily --
Billy, the Soldier Boy!

Soon he is one with the blinding smoke of it --
Volley and curse and groan:
Then he has done with the knightly joke of it --
It's rending flesh and bone.
There are pain-crazed animals a-shrieking there
And a warm blood stench that is a-reeking there;
He fights like a rat in a corner --
Billy, the Soldier Boy!

There he lies now, like a ghoulish score of him,
Left on the field for dead:
The ground all round is smeared with the gore of him
Even the leaves are red.
The Thing that was Billy lies a-dying there,
Writhing and a-twisting and a-crying there;
A sickening sun grins down on him --
Billy, the Soldier Boy!

Still not quite clear in the poor wrung heart of him
What the fuss was about,
See where he lies -- or a ghastly part of him --
While life is oozing out:
There are loathsome things he sees a-crawling there;
There are hoarse-voiced crows he hears a-calling there,
Eager for the foul feast spread for them --
Billy, the Soldier Boy!

How much longer, oh Lord, shall we bear it all?
How many more red years?
Story it and glory it and share it all,
In seas of blood and tears?
They are braggart attitudes we've worn so long;
They are tinsel platitudes we've sworn so long --
We who have turned the Devil's Grindstone,
Borne with the hell called War!
- Ruth Comfort Mitchell

The poem begins with the cheerful musicality of a ballad: blithe, bonny, and “blushing under the cheers,” Billy and scores of other eager young recruits march off to war.  Flags wave in celebration, and young women gaily toss flowers as they encourage the departing soldiers. Although Billy himself is not very clear as to why men are fighting, the shrill notes of the marching band are louder than his doubts.

With all the suddenness of Billy’s own initiation into the horrors of war, the poem’s third stanza plunges into a gruesome realm.  No more a “knightly joke,” the war surrounds the boy soldier until he is one with the smoke and stench, reduced to an animal-like state as he fights for survival “like a rat in a corner.” The fourth stanza is a grotesque parody of the first, as Billy again joins scores of other men, though now they lie mutilated and left for dead in a field “smeared with the gore” of their injuries. 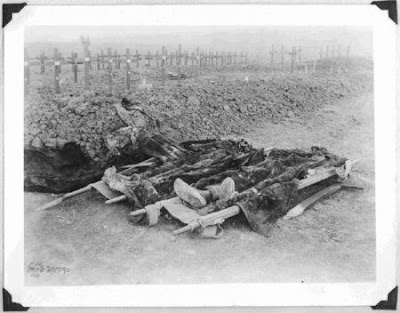 Billy the Soldier Boy never reaches manhood; this ironic hero’s journey begins in naïve adolescence, plunges into bestial fear, and concludes as he writhes in No Man’s Land, a ghastly, torn Thing.  The repeated exuberant refrain of “Billy, the Soldier Boy!” rings darkly satirical, and the sing-song rhyme and meter of the ballad jarringly contrast with the grim imagery.

The poem’s final stanza delivers a bitter condemnation of the “tinsel platitudes” and “braggart attitudes” that have fed the war. These attitudes and platitudes provide the energy that is needed to turn “the Devil’s Grindstone,” until the years run red with the blood of Billy the Soldier Boy and the hundreds of thousands like him.

Ruth Comfort Mitchell, the author of “He Went for a Soldier,” was an American writer born in California in 1882.  Married to Sanborn Young (who would become a California Senator in 1925), Mitchell later became involved in conservative organizations. Her best-known novel, Of Human Kindness, is a defense of gentleman farmers that was written in response to John Steinbeck’s The Grapes of Wrath.

Mitchell’s anti-war anger was voiced before America entered the First World War: it is likely that censorship would have prevented the poem’s publication after April of 1917.**
*Even Jessie Pope's views of the war are more nuanced than the unwavering pro-war view that is typically ascribed to her.  A future post on this blog will share one of her lesser-known poems.
**An interesting companion poem is Mary Gilmore’s “War.”  Although it appeared in The Bulletin April 5, 1917 (titled “The Mother”), this bitter anti-war poem was not included in any of Gilmore's published books of poetry until 1932.