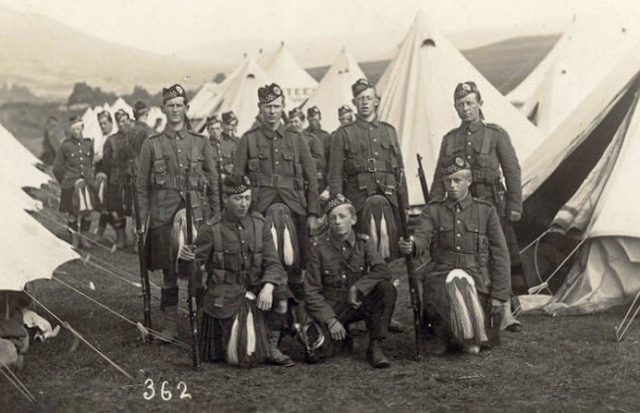 The night of May 16, 1916, Lieutenant Ewart Alan Mackintosh’s actions earned him the Military Cross for “conspicuous gallantry.”  As he led his Seaforth Highlanders in a raid on German trenches near Arras, sixteen of his men were wounded, two seriously.  Mackintosh carried one of the wounded, Private David Sutherland,* over one-hundred yards through German trenches, with German troops in close pursuit.  Nineteen-year-old David Sutherland “died of his wounds as he was hoisted out of the trench and had to be left at the enemy front line” (Powell, A Deep Cry).  His body was never recovered, and Sutherland has no known grave.  He is just one of the nearly 35,000 men commemorated on the Arras Memorial to the Missing at Faubourg d'Amiens military cemetery.

Shortly after that night, Mackintosh wrote and dedicated the following poem to Private David Sutherland and other men under his command who had died in the war.

In Memoriam
Private D. Sutherland Killed in Action in the German Trench,
May 16, 1916, and the Others Who Died

So you were David's father,
And he was your only son,
And the new-cut peats are rotting
And the work is left undone,

Because of an old man weeping,
Just an old man in pain,
For David, his son David,
That will not come again.

Oh, the letters he wrote you,
And I can see them still,
Not a word of the fighting,
But just the sheep on the hill
And how you should get the crops in
Ere the year get stormier,
And the Bosches have got his body,
And I was his officer.

You were only David's father,
But I had fifty sons
When we went up in the evening
Under the arch of the guns,
And we came back at twilight -
O God! I heard them call
To me for help and pity
That could not help at all.

Oh never will I forget you,
My men that trusted me,
More my sons than your fathers’,
For they could only see
The little helpless babies
And the young men in their pride.
They could not see you dying,
And hold you while you died.

Happy and young and gallant,
They saw their first-born go,
But not the strong limbs broken
And the beautiful men brought low,
The piteous writhing bodies,
They screamed “Don’t leave me, sir”,
For they were only your fathers
But I was your officer.
-- by EA Mackintosh**

The poem opens with “So you were David’s father” – putting us right in the moment at which the officer sits down to write an official letter of condolence.  Rather than an official letter, however, what Lieutenant Ewart Mackintosh writes is a poem that tries to make meaning out of the senseless death of a young man he had desperately tried to save.

As an officer, Mackintosh would have had to read his men’s letters home, censoring all correspondence to ensure that no operational information was shared that could fall into enemy hands.  No letter could be mailed without first having been reviewed by an officer, and so Mackintosh would have known about his men’s homes and their families.  He recalls David’s reticence in sharing the hardships and dangers of battle with his family; instead, Private Sutherland was worried about his father alone on the farm, attempting to care for both sheep and crops without his son by his side.

The officer tries to focus on the father’s sorrow – “just an old man in pain” – but his own grief overwhelms him and interrupts thoughts of Scottish crops and Highlands storms with the wrenching lines,
And the Bosches have got his body,
And I was his officer.


Like a father with fifty sons under his command, Mackintosh vows, “never will I forget you,/ My men that trusted me.”  Unlike their fathers, however, Mackintosh’s last view of the young men who were like sons to him wasn’t as they appeared “in their pride” leaving to join the war, “happy and young and gallant.”  Instead, he witnessed and bore responsibility for “the beautiful men brought low,” the “strong limbs broken.”  It was Mackintosh who heard their screams, “Don’t leave me, sir,” and held their “piteous writhing bodies” as they died.

This is a poem that Mackintosh never intended to send to David Sutherland’s father.  The officer knew how much the young private had shielded his father from the horrors of war, and he would have seen it as his duty to save David’s father from learning of his son’s last minutes of agony.†

Email ThisBlogThis!Share to TwitterShare to FacebookShare to Pinterest
Labels: Mackintosh